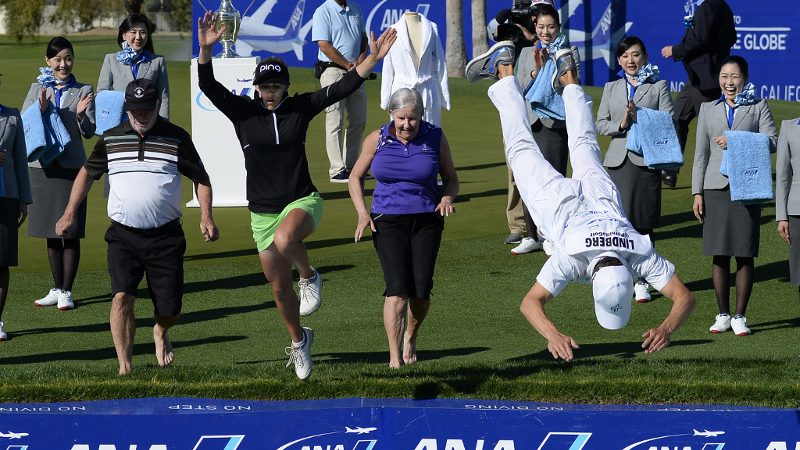 Pernilla Lindberg lifted the ANA Inspiration on Monday after beating Inbee Park in a play-off that lasted eight holes.

For the first time in the 47-year history of the ANA Inspiration, and the LPGA in the desert, two players returned to Mission Hills Country Club to decide a winner on Monday.

With the completion of seven holes in the play-off, Lindberg and Park could not be separated.

However, when matters moved to the 10th again, Lindberg made her move. She drained a 30-foot birdie foot while Park missed a 15-footer to extend the saga.

Worth another look! @pernillagolf drains this birdie putt to win @ANAinspiration.

There's nothing left but that famous splash – coming up @GolfChannel pic.twitter.com/Itie6AZvHM

Lindberg’s victory was her first on the LPGA Tour – only the fifth time a player has made the ANA Inspiration their maiden triumph.

Speaking afterwards, the 31-year-old could not hide her delight.

“I just know I’m a grinder and I just felt this was mine and I’m going to do this,” said Lindberg.

“I couldn’t believe that last one went in and Inbee didn’t hole hers and it’s mine.

“I dreamt of this moment ever since I was a kid.

“I remember writing goals when I was high school to win a major and I thought it was too good of a dream to come true, but it has.”