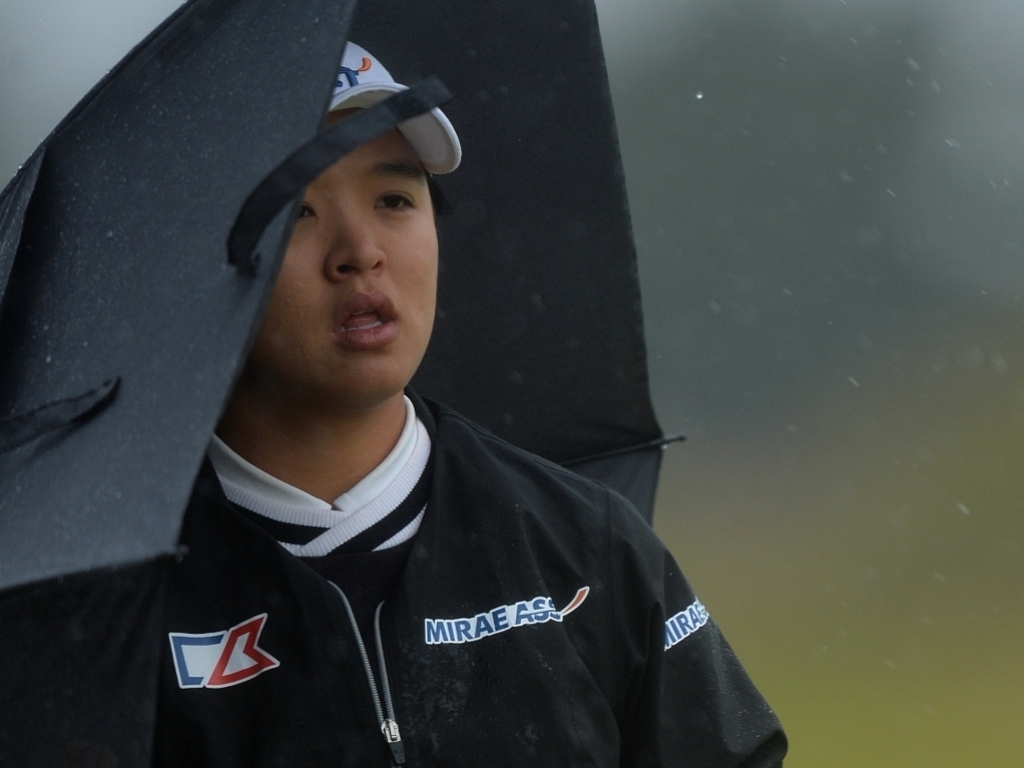 Sei Young Kim and Karrie Webb played through sideways rain and 30mph winds to share the lead at six-under-par heading into the final round of the Aberdeen Asset Management Ladies Scottish Open.

Kim and Webb shot rounds of 69 and 70 at Dundonald Links on Saturday to hold a two-stroke lead over the halfway leader Cristie Kerr. Carlota Ciganda and Sun Young Yoo are two strokes further back.

Webb made back to back birdies on the second and third holes to regain the lead she had held after her opening round, of 65. The 42-year-old Australian then extended her advantage with a birdie at the seventh and held a one stroke lead after an outward total of 33, three-under-par.

The Hall of Famer, who is now in her 23rd season as a professional, made two bogeys and some sensational saves on the back nine, before she and Kim showed their mettle as they birdied the
17th in a torrential rainstorm.

Sei Young Kim and Karrie Webb head into the final round @AberdeenLSO tied for the lead with Cristie Kerr not far behind… pic.twitter.com/XVaSdVmjjm

Coming down the par-5 18th, Kim hit a beautiful second shot up to 10 feet from the hole and faced an eagle putt to move one-stroke ahead, but the wind buffeted her ball and it ended just left of the hole.

Speaking after her round, the 24-year-old world number 11 from Seoul seemed thrilled. Kim said: “I’ve never played before in this weather. It was a really great experience. It’s rare to play with veteran players, like Cristie Kerr and Karrie Webb: they are really great players. It was really tough to focus on each shot, but I kept focused for a few seconds.”

Webb was pleased with the way she battled in the conditions. “I felt very comfortable out there early on and got off to a good start, so that settled any nerves. I really just hung in there on the back nine. I actually got a couple of good breaks when it was raining. I made some good up and downs as well.”

Kerr, who signed for a 73, gave up on using an umbrella in the end, as she was completely soaked. She said after her round: “I played a lot better than the score. I had two three-putts on the back nine, which were kind of uncharacteristic. I’ve just got to do better.”

With Ciganda only four shots from the lead, there is now the scintillating possibility of a Spanish double, following Rafa Cabrera Bello’s win in the men’s Aberdeen Asset Management Scottish Open a fortnight ago.

Ciganda said: “I’ve been playing good the last week, so I’m trying to stay patient and stick to my plan. I’m having a good time out there with my caddie, Terry (MacNamara). I’m learning a lot and he’s teaching me so many things. I still have lots to learn, but I’m having fun and I’ll try my best tomorrow.”

Another potential Solheim Cup player in the hunt is Georgia Hall, who shares sixth place with Olafia Kristinsdottir and Mi Hyang Lee on level par.

The final round is set to be another classic test of links golf, with sunny skies expected in the morning, followed by cloudier skies and slightly less wind than Saturday.