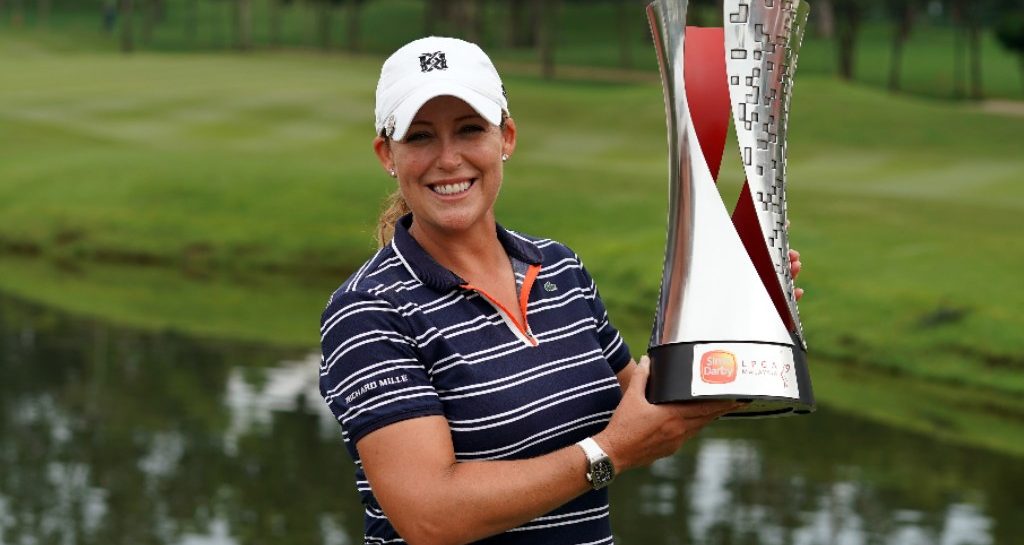 Cristie Kerr sank a 30-foot birdie on the 18th hole for a final round final-round 71 to win the Sime Darby LPGA Malaysia on Sunday.

It was Kerr’s 20th career victory as she carded a four-day total of 15-under-par, 269 to win by one-stroke over Jacqui Concolino, Danielle Kang and Shanshan Feng.

The American is the first 40-year-old to win on Tour since 2011 when Catriona Matthew won the Lorena Ochoa Invitational at 42.

“To do what I do for a living is amazing,” said Kerr. “This tournament is a beacon for women’s health and raising awareness for breast cancer is near and dear to my heart. I’m so proud to be the champion of this tournament.”

Kerr made an early birdie on hole two to stretch her lead to two shots over Feng. Then on hole seven, things tightened when Kerr hit her tee shot on the par-3 into the hazard. She had to walk back to the tee to hit again and made a double-bogey.

Feng sank 10-foot par putt and the two were tied for the lead at 14 under.

Nelly Korda nailed five birdies over her first 11 holes to get to 12-under, Jacqui Concolino and In Gee Chun were also at 12-under before Kerr and Feng were on the back nine.

On hole nine, Kerr hit a 7-iron to ten feet as Feng missed her approach way left and her ball plugged in the hazard near the water. Feng hit a very nice chip to 12-feet. Then Kerr birdied in the to get to 15-under.

Feng then missed her par putt left and Kerr took a two-shot lead. Concolino got to within one of Kerr with back-to-back birdies on 11 and 12.

With a two-stroke lead and four to play, Kerr hit her tee shot on the par-3 15th into the bunker. She hit a nice bunker shot to 10-feet but missed the par putt to drop to 14-under.

But Kerr struck right back by sinking a birdie on the 16th to get to 15 under.

Kerr then three-putted for bogey on the 17th to drop down to 14 under. Concolino did not let up and birdied the 17th and made par on the 18th to share the lead at 14 under.

Neither Kerr nor Feng were in close with their approaches into 18 so a four-way playoff looked likely.