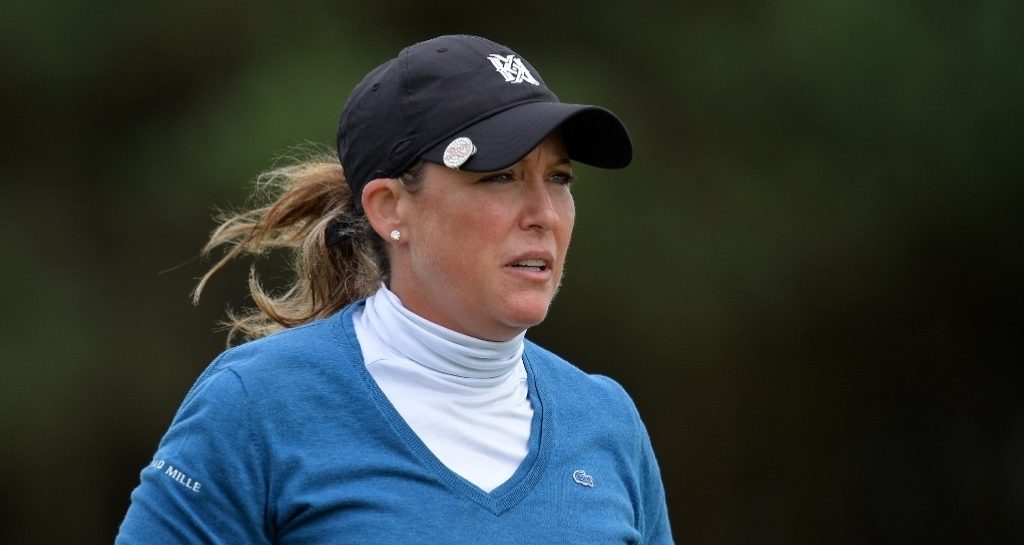 United States veteran Cristie Kerr produced three birdies in her last six holes for a second round of 73 to hold a slender one-shot lead at the halfway stage of the Aberdeen Asset Management Ladies Scottish Open.

The 39-year-old from Florida carded a double bogey at the long fifth and dropped shots at the short sixth and 11th in a near gale at Dundonald Links on Friday, but then fought back with birdies on the 13th, 14th and 17th to move ahead at five-under-par.

Australian Karrie Webb lies in second after a 75, while South Korean pair Sei Young Kim and Sun Young Yoo fired rounds of 72 and 69 respectively to sit a shot further back at three-under-par.

Kerr, who claimed her 19th LPGA title at the LOTTE Championship in Hawaii in April, said: “It was tough. I hit it so well yesterday, and I mean, that shows you the difference. I didn't hit it that great today but I still managed. My caddie and I managed the golf course well, and we made the recovery shots when we needed to. I'm trying not to get ahead of myself in this weather.”

Tap in par on the last for @CKGolferChic and she'll take the clubhouse lead at 5-under pic.twitter.com/LgRP8IwjiI

Thailand’s Pornanong Phatlum carded a 73 to lie in fifth position on two-under, while Iceland’s Olafia Kristinsdottir recorded a 70 to sit in sixth place in the co-sanctioned LET and LPGA event, which is being played at the same venue as the men’s Aberdeen Asset Management Scottish Open a fortnight ago.

Kristinsdottir, who held the lead at the Fatima Bint Mubarak Ladies Open as an LET rookie in 2016, said that she was motivated by the prospect of gaining an exemption into next week’s Ricoh Women’s British Open at Kingsbarns, either as the winner, or as one of the top three Ladies European Tour Members not otherwise exempt.

“I unfortunately didn't fulfil the criteria to do the Monday qualifier, so this is my only shot,” said Kristinsdottir, whose Scottish coach, Derrick Moore, gave her some tips for playing links golf.

“You've just got to accept what you get, and I've had a lot of experience in bad weather in Iceland, so it's definitely helpful,” she added.

Long-hitting Frenchwoman Joanna Klatten shot the round of the day – a four-under-par 68 – which included an eagle, four birdies and two bogeys – to climb 78 places into a tie for seventh alongside Georgia Hall, Minjee Lee and Carlota Ciganda.

The 2012 Aberdeen Asset Management Ladies Scottish Open champion Carly Booth, who is already exempt into next week’s Major, delighted her home fans with a two-under-par 70 on Friday to share 11th spot with 12 other players.

The world number one, So Yeon Ryu, shot a second-round of 77 to make the cut, but Isabelle Boineau’s tenure as champion ended with a 75, for a 36-hole total of seven-over, which was two strokes too many to play at the weekend.