Ariya Jutanugarn on top in Scotland 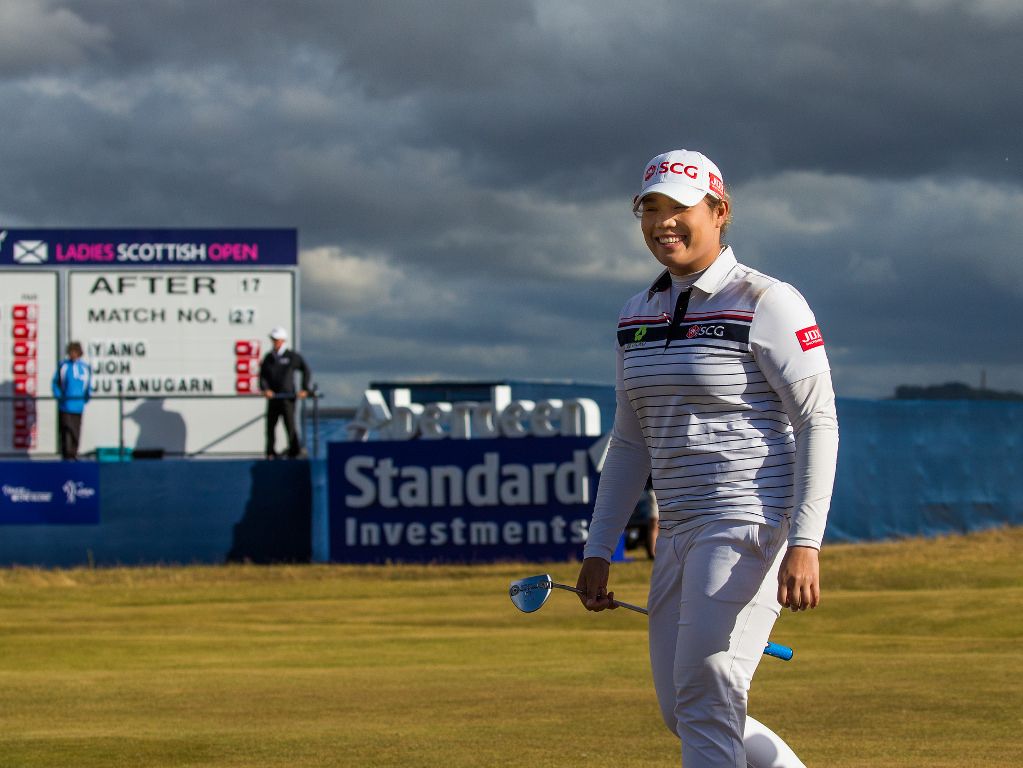 Ariya Jutanugarn and Amy Yang share a one-shot 54-hole lead on eight-under 205 after a helter-skelter third round of the Aberdeen Standard Investments Ladies Scottish Open at Gullane.

On a day of intensely strong and blustery wind it was not so much “Moving Day” as “Hold-on-to-something-very-tightly Day”.

To highlight the impact the weather had consider that Australia’s Sarah Kemp posted an early round of 4-under-par 67 and by the day’s end she had moved 57 spots up the leaderboard to T10th.

Jin Young Ko’s 68 got her from T39th into tied seventh. Carlota Ciganda drove the 385-yard par-4 18th green, made birdie, and her 68 inched closer to the top with every gust that battered the 36-hole leaders who started two hours after her.

Ariya @Jutanugarn EAGLES 16 to take lead at 8-under @LadiesScottish

Minjee Lee and Amy Yang are 1 back. pic.twitter.com/NtrlNg5GUF

Overnight leader Tiffany Joh birdied the par-5 second hole to extend her lead to four, but thereafter the wind hurt the Californian from all angles. She scratched six bogeys and two double bogeys on her card, but maintained her sense of humour, laughing at the absurdity of her task trying to find the par-3 12th raised green with a ferocious wind hurling the ball right-to-left.

She eventually carded a 9-over-par 80 which ordinarily would leave her no hope on the final day, but in point of fact she is just four back of the lead, tied seventh on 4-under 208 alongside Ko and South Africa’s Lee-Anne Pace.

She was far from alone in struggling. World number two Sung Hyun Park’s 77 saw her drop to T17th and also out of the race for the world number one spot.

So Yeon Ryu remains in contention for both the win and that secondary target. Her 72 was an exhibition of calm and creativity. She is tied fourth on 6-under 207 alongside Haeji Kang who ground out a 71.

Australia’s Minjee Lee looked bound to grab the lead when she reached the 11th tee 3-under for the day, but she was hit by four bogeys and just the one par breaker on the way home. Her level-par 71 still leaves her handily placed, one back and alone in third.

Both the leaders made late moves to gain their narrow advantage over the field. Korea’s Yang had secured two early birdies, but five bogeys followed until she reversed the trend with a par breaker on 18 to complete a 73.

With it she joined Thailand’s Jutanugarn (another 73) who insisted on Friday that she doesn’t really like links golf and yet coped with it as well as anyone. True she made four bogeys through 15 holes, but she was still in the hunt and when she crashed an eagle-3 from 40-yards at the 16th her card was tidied and she can hope for less brutal conditions on Sunday.

“I think I’m just really lucky,” she said. “I said early in the day, here is the Scottish Open, this is the real one.”

In addition to the quest of Jutanugarn and Ryu to return to the top of the world rankings, a further sub-plot to the final day involves the LET: the top three members not already exempt from nest week’s Ricoh Women’s British Open will gain entry to the fourth major of the year.