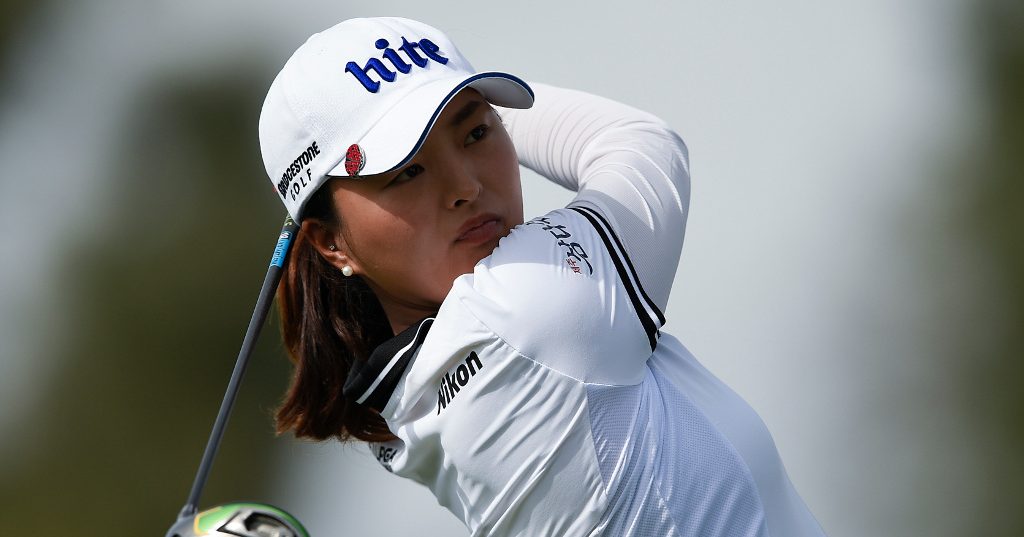 Jin Young Ko went off the rails mid-round but recovered to take a one stroke lead into what is shaping up to be a sizzling Sunday at the ANA Inspiration.

The South Korean star signed for a four under 68 around Mission Hills in California on Saturday, enough to take her to eight under for the major, one stroke ahead of fellow countryman In-Kyung Kim.

Kim enjoyed a superlative front nine, finding herself four under for the round on the seventh tee, then rolled in another birdie on the ninth for good measure. That ballooned her lead out to five strokes, with the prospect of a maiden major title looming large in her mind. However, Kim did not have it all her own way.

On the par three 14th, an errant pitching wedge found the water, leading to a double bogey. With the nerves flowing through her, Kim then went on to bogey the 15th and her lead was almost evaporated in the space of 20 minutes. But Ko found some solace when she drained a 12-foot birdie putt on the 17th to give her a one shot cushion going into the final round.

"Just think about now, not future."

Jin Young Ko heads into the final round of the @ANAinspiration with a one stroke lead as she looks to earn her first major title.

“We are a good team,” Ko’s experienced caddie Dave Brooker told the press.

“Our M.O. is fairways and greens. She is just so smart for her age. She knows what she’s doing out there and knows how to control her emotions.”

One shot back is second round leader Kim, who backed up her second round 65 with a rather disappointing one over 73 on Saturday, but it still in the mix nonetheless.

American Danielle Kang is tied for third with Mi Hyang Lee on five under. The 26-year-old is hunting down her second major win and is under no illusions as to the challenge that lies ahead.

“This is the toughest I’ve ever played it here and I’ve played eight times now,” said Kang after shooting 70.

“I know I’m at five and I know the gap closed and that there are a lot of people in it now. It’s going to be exciting tomorrow.”

"The golf course is set so well for me. I love it."@daniellekang has only made two bogeys in her last 36 holes, and she'll look to keep that consistency tomorrow during the final round of the @ANAinspiration.