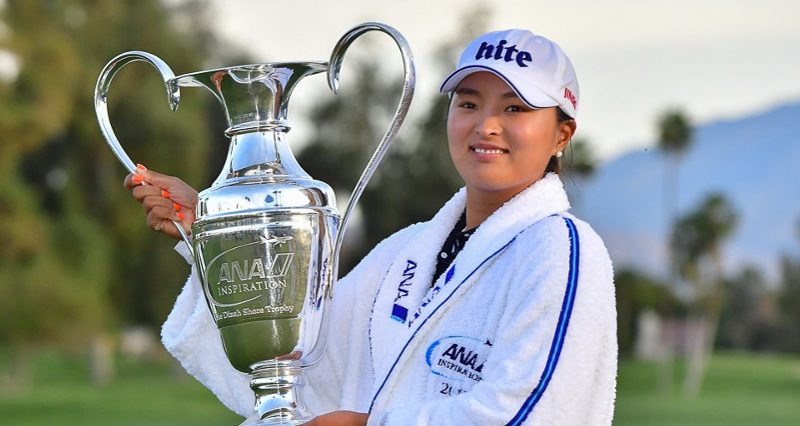 South Korean Jin Young Ko lifted her maiden major trophy at the ANA Inspiration on Sunday, before celebrating with the traditional winner’s leap into Poppie’s Pond.

The 23-year-old from Seoul, who also rose to No 1 in the world rankings with the victory, finished three strokes clear of countrywomen Mi Hyang Lee after a steady final-round 70 for a 10-under-par total of 278.

Asked about the World No 1 ranking, she added: “I just try to focus on my game on the course. It doesn’t matter about world ranking. I don’t like numbers like No. 1 or No. 2. I’m just playing on the course.”

Ko coped better with the challenging Mission Hills course than anyone else, as she negotiated the thick rough, tight fairways and prodigious length off the tee with aplomb.

Jin Young Ko led the field in birdies and greens in regulation at the @ANAinspiration, a recipe for Major success.

During her final round, Ko birdied two of her final three holes to lock up her victory.

“If ball goes right or left it doesn’t make me happy, but I’m still trying to be happy,” Ko said. “Also, I really try, don’t think about future, doesn’t matter. Just focus on my swing, on the putting. That’s why I win this week.”

The victory comes just a couple of weeks after her fourth win on the LPGA Tour at the Founders Cup. She now leads the money list and has five top-three finishes in six events this year.

"I still can't believe it."

Trophy in hand, Jin Young Ko was still in disbelief after earning her first Major victory at the @ANAinspiration.

Asked if she was surprised by her incredible run of recent successes, she replied: “No, no, no. I had really hard practice in winter training offseason in Palm Springs.”

“My caddie, Benji (Thompson), helped out tremendously,” she said. “I was getting down a little bit, but he just kept me right in there playing aggressively the whole day – making those birdies and just firing at every pin I could.”

It was a disappointing end to the tournament for Kim, who lost a chance to win the event seven years ago after missing a 14-inch putt on the final hole of regulation.