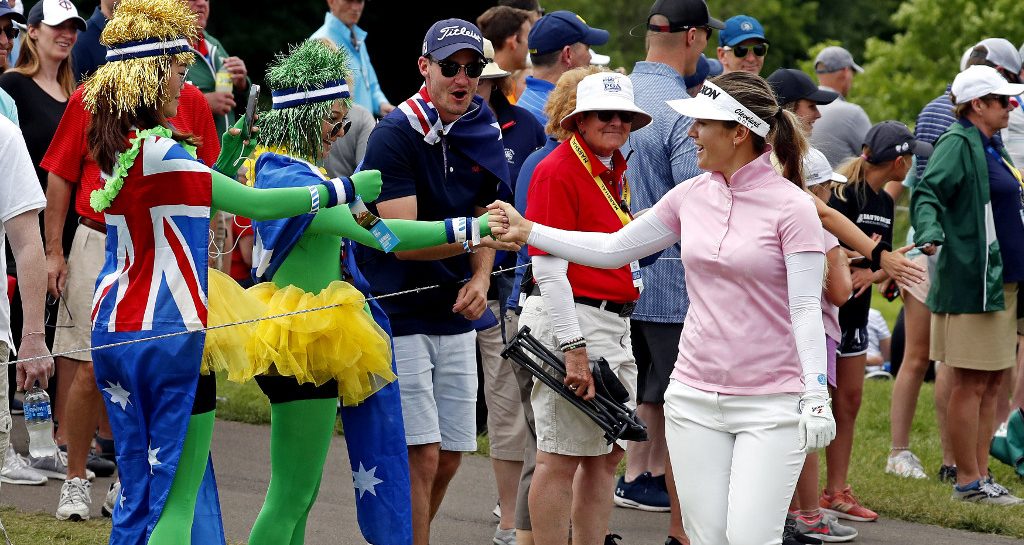 Hannah Green maintained a slim advantage at the Women’s PGA Championship on Saturday, but two-time major winner Ariya Jutanugarn is lurking just one shot back.

Green has led since the first round at Hazeltine, but while she started the third round three strokes ahead, she finished it just one shot clear of former World No 1 Jutanugarn despite a two-under-par 70.

Jutanugarn moved to within one shot of Green’s lead on nine under par after a 68.

.@hannahgreengolf and @jutanugarn battled back-and-forth at @Hazeltine as the gap tightened at the top of the leaderboard on moving day.

Green might have been further in front, but after making three of her four birdies on the front nine, she stumbled with two bogeys in her final six holes – including a three-putt at the last – to open the door for Jutanugarn to close in.

“When I had more time to wait between shots that’s when I started to feel the nerves,” said Green, who has never won a major or LPGA title. “I need to just slow things down and take my time.

“I am disappointed with my putts on 16 and 18. I thought, ‘OK maybe I was nervous in that stretch.'”

"It just felt like it was us two on the golf course."@hannahgreengolf went shot for shot with Ariya @jutanugarn today and she'll take a one-stroke lead into the final round at the @KPMGWomensPGA. pic.twitter.com/od3s3TWbha

Jutanugarn might have taken even more advantage of Green’s late stumble, but after four birdies on the front nine, she also failed to make any further gains on the back, with birdies at 15 and 17 cancelled out by bogeys at 13 and 16.

“Every time I play bad I start to get unhappy and be angry. I have to learn and know that golf and life are different,” she said.

“Even if I play bad I still have the best family. When I know that, everything is just happy. If I don’t play well, I can still be happy.”

Ariya @Jutanugarn has her eyes set on her third major after carding a 4-under 68 at the @KPMGWomensPGA on Saturday. pic.twitter.com/qbyVnoy3oQ

Nelly Korda shot a 69 to tie for third with fellow American Lizette Salas, who had a 68. The duo are three behind Jutanugarn, however, and four behind the leader.

Defending champion Sung Hyun Park shot a second straight 71 to follow a further shot back in a tie for fifth with Sei Young Kim, who fired a 67.

While Green remains in line for a wire-to-wire major win, the 22-year-old knows it won’t be easy come Sunday.

“This is my first time in this position so I feel I will be a little nervous tomorrow,” she said.