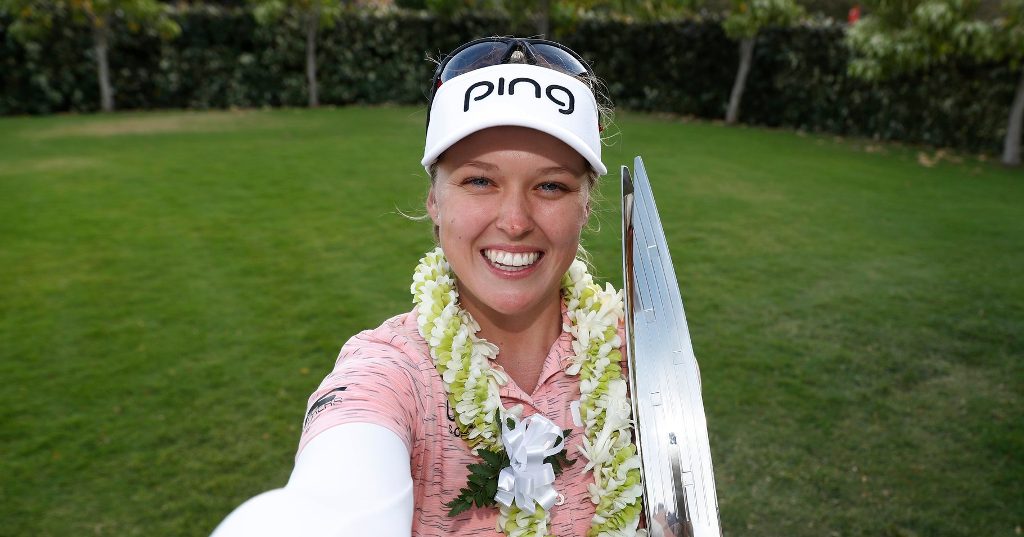 Brooke Henderson picked up her eighth career win at the Lotte Championship on Saturday.

The Canadian signed for a two under 70 in the final round at a gusty Ko Olina Golf Club in Hawaii, enough to take her to 16 under for the tournament and defend her title by four strokes over a chasing Eun-Hee Ji.

Henderson started the final round tied for the lead with Nelly Korda, but the American capitulated to card a dismal five over 77, which included a disastrous quadruple bogey eight on the 18th.

“Pretty bad,” Korda told the press after throwing her ball into the water hazard.

“I mean, it was a tough day, but I ended really poorly and I’m pretty disappointed in that. It was an unfortunate final round, but there is nothing I can do about it anymore.”

Meanwhile, Henderson was a picture of calm. After a hiccup on the opening hole where she carded a bogey five, she bounced back quickly with gains on the third and fifth. Henderson closed with seven straight pars to cruise to a comfortable win.

The final round of the @LPGALOTTE culminated with @BrookeHenderson winning the title once again.

Check out all the best shots from the final round!

“When I was younger it was just a goal to be on the LPGA Tour, to win my first event,” revealed the 21-year-old.

“And when that happened and I won my first major the year after, things kind of just started to fall into place. I knew the record was eight. Just kept creeping toward it the last three years, which was really exciting.

“And then I think starting last year I sort of saw that it was within my reach if I had two good seasons. Last year put me into great position, and coming back this year it’s been on the back of my mind every week that I tee it up. I’m just really happy that I have finally done it. Looking forward to overtaking it now.”

Further down the leaderboard, Ariya Jutanugarn and Minjee Lee were in T3 on eleven under, five strokes off the pace.