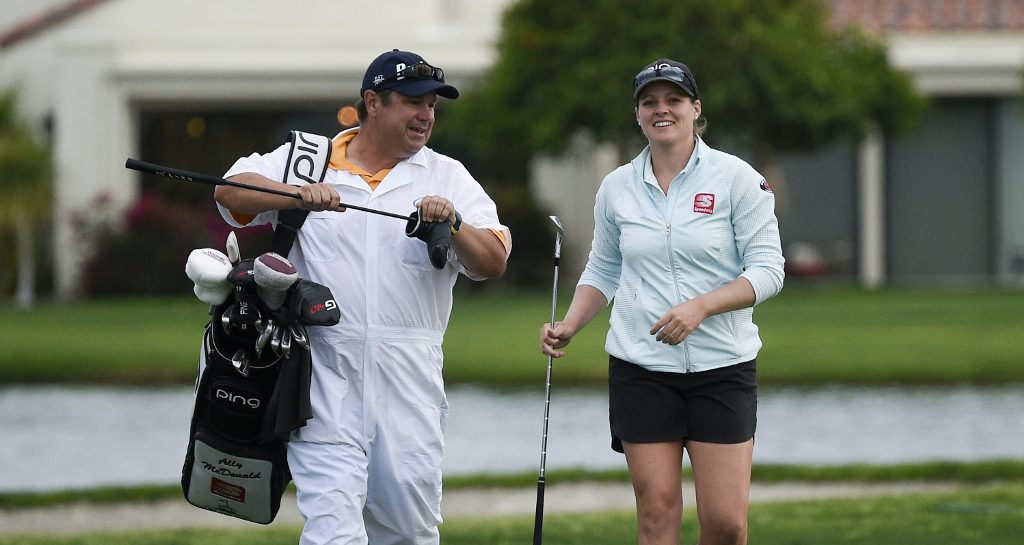 The first women’s major of the year, the ANA Inspiration, got underway in Rancho Mirage, California, on Thursday, with Ally McDonald grabbing the first-round lead.

McDonald birdied the 18th hole to lift herself out of a five-women logjam into solo first place courtesy of a four-under-par 68.

Some more big names follow a further shot back in a 10-women tie for sixth, including former World No 1 Lydia Ko, Cristie Kerr, Jessica Korda, Lizette Salas and Amy Yang.

The first round of golf's first major left us with a crowded leaderboard at the @ANAinspiration.

There are 14 players within two strokes of @allymc10's lead heading into Round 2.

World number one Park Sung-hyun headed a group of 13 on one-under 71, as only 28 players managed to break par on the challenging Mission Hills Country Club course.

Leader McDonald was understandably thrilled to find herself in the lead, but doesn’t want to get ahead of herself.

“I think in this position, which I’ve never been in, it’s so easy to get ahead of yourself,” said the 26-year-old, who has never won on the LPGA. “For me, I’m just going to take it easy. I know that on the very first day, a great round is awesome, but there is so much more golf left to play.

“I’m just excited to put a good round together in a major, and look forward to teeing it up again tomorrow.”

.@allymc10 is the sole leader following one round at the @ANAinspiration.

McDonald battled high winds and the setting sun as she birdied the final hole to get to 4-under.

Thompson, a former winner of this championship in 2014, had two bogeys and five birdies, and closed with back-to-back gains to finish just one stroke back.

“It was a little bit of an up-and-down day,” Thompson said. “I hit some great shots and then hit some poor ones off the tee. I think I should have hit a lot more fairways.

“I made some great putts, which is always a big confidence booster for me. I think overall I just could have hit it better. But still not complaining.”

Kim Hyo-joo, who also won a major trophy in 2014, the Evian Championship, was one of the few players to make an eagle on Thursday.

“My chipping was great,” Kim said. “That’s how I was able to get a low score.”