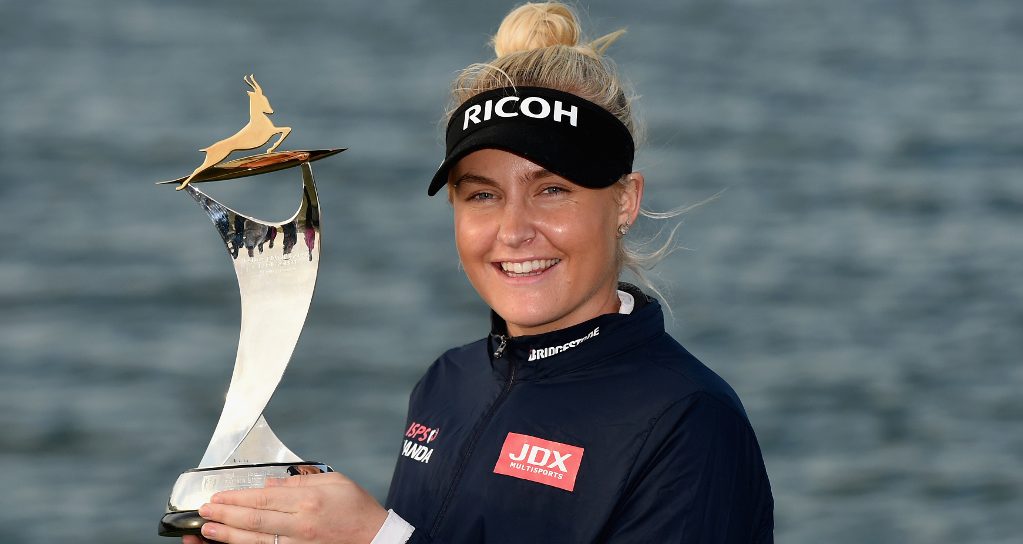 England’s Charley Hull started 2019 with a bang as she claimed her second LET trophy with a wire-to-wire victory in the Fatima Bint Mubarak Ladies Open.

Hull fired rounds of 67, 72 and 69 in warm and windy conditions for a total of eight-under-par 208 at the spectacular Saadiyat Beach Golf Club in Abu Dhabi, ending one stroke ahead of Marianne Skarpnord.

The Norwegian set the clubhouse target at seven-under-par and Hull needed a par on the last hole to seal the victory, which she delivered in style, getting up and down from a bunker behind the 18th green, with her new fiancé, Ozzie Smith, watching on. Smith proposed with a diamond ring at Christmas and now the pair have another reason to celebrate, with the prospect of another season of stunning success ahead, including a potential fourth Solheim Cup appearance in Scotland in September.

“I’ve practised really, really hard over the winter and it feels great to win back on the LET, especially since I had my first pro win in Morocco five years ago,” said Hull, the Rookie of the Year in 2013, who went on to win the Order of Merit in 2014.

“Hopefully I can get a few more wins this year and I’ve been practising really hard so it shows that my hard work is paying off.”

Hull started the final round with a one-stroke lead and she went two ahead with a birdie on the second hole, but dropped a shot on the short third after getting stuck down a steep slope to the right of the green, holing a good eight-footer for bogey.

The 22-year-old from Kettering made another solid eight-footer, this time for birdie, on the sixth green but then dropped a shot on hole 10. An eagle on the par-5 11th, where she played her 6-iron to 15 feet, put her two clear of Skarpnord. She then holed another birdie putt from 10 feet on the 14th to reach eight-under-par and held firm in the breeze.

“I’m very happy with my round. I left a lot of putts out there today, but it’s hard to putt when it’s windy like this,” she said.

“It was windy all three days really and especially on the second day. Today the wind got up in the end and it was a tricky finish, especially the 18th hole, because you can’t hit more than a 5-iron off that tee to be short of the bunkers, or you go with the driver, and go over it all, and that’s a risky shot. With that back right pin it was a good finish and I hit a 5-iron, over the green, had a 35 yard bunker shot and I stiffed it. It was quite tricky and I made the putt, so it feels really good to be back in the winner’s circle again.”

Hull received the iconic gazelle trophy from the golf course designer, Gary Player, whom she said she said she had looked up to her entire career and whom she thanked for designing “such a great course.”

Skarpnord, who last won on the LET in 2013, said that her 68 for solo second was “a big step in the right direction.”

“Every time I was in contention last year, top three, five, ten, I shot over par on the last round. I kind of had a goal today that I was going to shoot under par and if I did that, then I’d be very happy,” she said.

“I holed a couple of putts on the back nine and played pretty good, but Charley plays good golf and I heard she had a very tricky bunker shot on the last and got up and down to win. She hits those shots and you probably need to be one ahead to beat her.”

But the round of the day belonged to the 2017 champion, Aditi Ashok, who signed off with a 66 to finish in tied eighth position with Jenny Haglund and Nanna Koerstz Madsen on two-under.