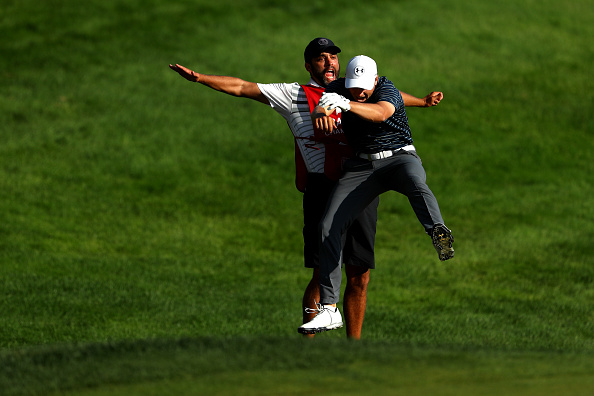 Jordan Spieth sent the crowd into raptures when he holed out from a bunker to win the Travelers Championship on Sunday.

The Texan blew a three-shot lead mid-round and would find himself in a play-off with Daniel Berger as they went down the 18th for the second time.

Spieth then threw up a perfect shot from a greenside bunker, rolled into the cup and sent the crowd into delirium. Berger needed to hole his 50 foot putt from off the green to force a playoff, and he nearly did, but the golfing gods were with Spieth on Sunday.

And what a celebration with caddie Michael Greller…

“I went nuts…that was fun,” said Spieth of his reaction.

“This is probably my luckiest win, for sure, with all the breaks I got today.”

Wouldn’t be surprised if @JordanSpieth just holed this bunker shot

What prompted Thomas’ tweet was the fact that Spieth had performed such a feat before. At the 2013 John Deere Classic, Spieth holed a bunker shot on the last to force a three-way play-off, which he won to win his maiden PGA Tour title. Four years later, he’d be lifting American silverware for the tenth time.

“I guess if you call something enough times, every once in awhile, one of them goes in,” he quipped.

“At least I think this one had good speed going in. I’ve always taken some crap from my peers about the John Deere one potentially going off the green or into the water or whatever.”