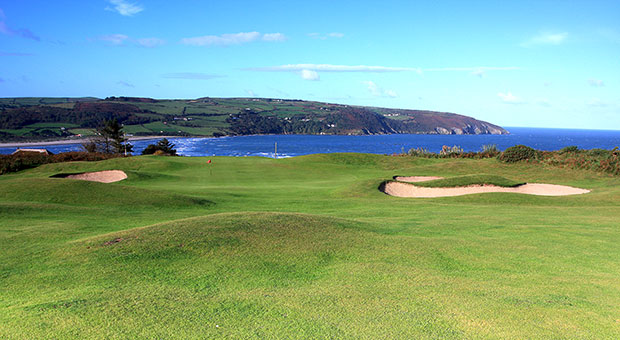 Many won’t have heard of the region – it’s on the Welsh coast, facing Ireland – and that proximity to the sea is essential to the golfing attractions of Ceredigion.

Because each of the four courses Golf365 played represents a distinctly different challenge, but each of them also has one thing in common: wonderful views of Cardigan Bay.

From the Lleyn peninsula in the north, to Cardigan town itself in the south, via the high peaks of Snowdonia National Park, the seaside resort of Aberystwyth and the entire coastline of Ceredigion – it’s all visible from these courses.

When the sun shines the seas glitter and, if you’re lucky, the dolphins will vault from the waves and the seals nod their noses at you. It’s little known, but well worth a visit.

Here’s the Golf365 lowdown on golf in Ceredigion:

History – Records indicate that golf has been played at Borth for nearly 150 years, making it one of the oldest courses in the UK.

Location – Between the holiday town of Borth and the stunning Ynyslas dunes.

Standout feature – This is golf as it was originally played.

Key holes – The par-four second is a brute into the wind. Anything right of the fairway finds the coast road, anything left lands on the beach. The par-three 11th plays from the top of one dune, across another and must find a green protected by yet more sand hills and a series of pot bunkers. The very next hole is a tempting short par-four which demands an accurate drive through the dunes to a rollercoaster fairway.

History – Celebrated 100 years of golf in 2011, on a course designed by six-time Open champion Harry Vardon.

Standout feature – Stunning views of the town and the entire arc of Cardigan Bay.

Key holes – The 14th and 15th holes. 14 is a short par-four with a devilish raised green. Everything from eagle to triple bogey is a possibility. 15 is a par-five that sweeps down the hill to the clubhouse. Both the drive and approach are inviting.

History – The youngest course in the area, built in 1991, but has matured well, giving the hill top holes a more defined and tree-lined appearance.

Location – Just outside the village of Llanrhystud. Green valleys in one direction, the sea in the other.

Standout feature – The hill. The layout starts with four holes which climb it, the next 12 holes are gently undulating across the top of it, and then the par-three 17th plunges from the top of it.

Key holes – That 17th is hard to avoid. An imposing tee shot, but if you nail it you’ll be well rewarded. A really fun shot. The sixth is a good challenge too, especially in the wind, with the approach shot calling for a nerveless strike to avoid water down the right hand side.

History – Golf was first played in Cardigan in the 19th century, but this course was laid out in the 1920s.

Location – At the mouth of the Teifi estuary, with views of Poppit Sands beach and the Irish Sea.

Style – A cliff top course, but plays much like a links course.

Key holes – 16 and 17 are two really fun, and deceptive, holes. The 16th is a par-three that can play anything from 9-iron to 3-wood depending on the wind. The 17th is a short par-four which again plays very differently according to conditions. Both have superb greens on which a three-putt is never out of the question.

Ideal for groups of golfers, being both central to the region and having, of course, its own layout. Plenty of options too. There are Scandinavian A frame lodges on the hillside, with their own hot tubs, perfect for a post-round warm-down. Or alternatively the on-site hotel. Both have access to the swimming pool, gym, sauna and bar so plenty to do off-the-course.

Bang on the promenade so great views of Cardigan Bay and the sunsets. Individually designed rooms, an excellent restaurant and a superb breakfast (specialities include breakfast scotch egg, Bloody Mary ketchup and Magic Welsh rarebit).

Once the last stop of drovers heading for London, now a fine hotel and restaurant (specialities include Cambrian lamb and locally caught fish). Three cosy bars are a great place to while away an evening in front of roaring log fires, discussing the golf and the elephant reputedly buried in the beer garden.

Aberystwyth was one of Victorian Britain’s favourite holiday spots and is now a surprisingly cosmopolitan town, thanks to a thriving university population which have spawned cafes and restaurants all along on the seafront.

The promenade even vaguely resembles Venice Beach, thanks to the joggers and exercisers who make their way up and down it morning and night. It’s also a popular spot for surfers, who can often be seen out at sea, waiting for the best waves.

Inland, beyond the dramatic Devil’s Bridge waterfall, is the small town of Tregaron, which packs a punch with a host of unusual stories, including the tale of the elephant which visited in the 19th century as part of a travelling circus, only to be poisoned by lead in the stream and die. It’s the same one rumoured to be buried behind the Y Talbot Inn. The town is also gateway to the striking Cambrian Mountains.

Between Aberystwyth and Cardigan are a series of small fishing ports and beaches. Aberaeron is notable for the pastel-coloured terraced houses which line the harbour and Newquay for once being home to Dylan Thomas.

Further south the coastline becomes more rugged and you can find the tiny village of Llangrannog hidden at the foot of the cliffs, Penbryn beach, a location for the James Bond film ‘Die Another Day’, and the remote but beautiful chapel and beach at Mwnt.

* For a picture gallery covering some of the beautiful golf courses Matt visited, click here