Tony Jacklin on the Open 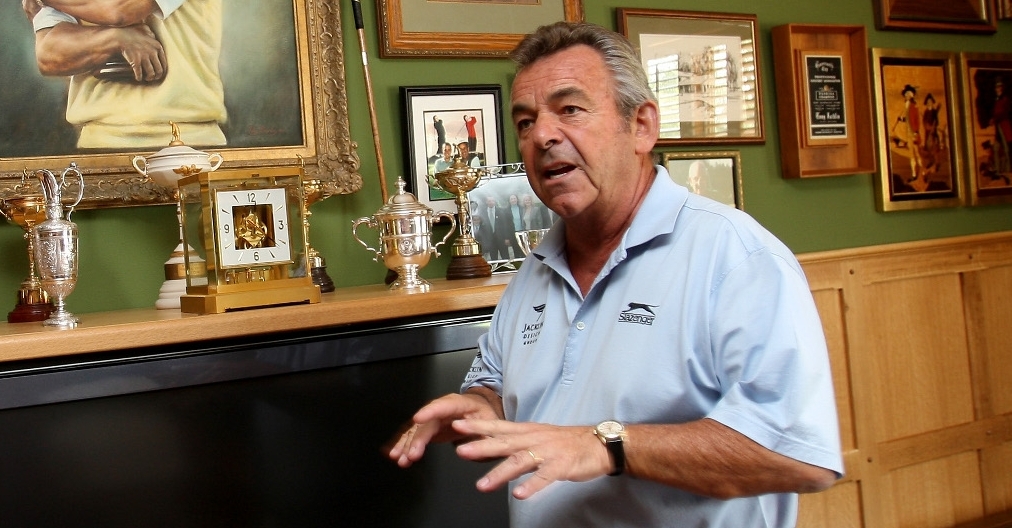 If you sit down to talk golf with Tony Jacklin you’re in for a treat.

Ask one question and he’s away. He loves the game and he loves to discuss it, but he does so with an enthusiasm undimmed by the passage of time. Mention a swing and he’s up demonstrating, hint at a putting stroke and he’s showing you how it was done.

Ahead of the 145th Open Championship at Royal Troon Golf365 sat down with the 1969 winner. Here’s what he has to say:

“To play well in an Open Championship the first thing you’ve got to do is recognise is that it’s not fair.”

“It’s not fair for anybody because you’re going to get bad bounces and good shots are not always going to be rewarded with good results.

“You’ll get bad breaks so deal with it.”

“So before you get there – and this is the important bit – you need to be ready to know that you’re going to get kicked in the teeth a few times. Don’t start feeling sorry for yourself.”

“This week is different.”

“It might sound simple but it’s not just the equipment we play with that’s improved but the equipment to look after the courses has improved too. So people are used to playing immaculate courses, especially during tournament time and the Open is never going to be like that. Be ready for that. Know that it‘s going to be different.”

“If the wind is blowing, dance with it.”

“Coping with the weather is key. You can get horrendous conditions and it’s about using them rather than fighting them. Use the weather as an ally.”

“The shot is whatever you imagine it to be.”

“You’re just trying to make a score, not hit the right club. 150 yards to the pin can be a wedge or a 4-iron. You’ve need more imagination for links than any other type of course. If you see a chipped 5-iron hit a chipped 5-iron.”

“Minimise the risk all the time. Play the percentages, keep the ball in play.”

“Bobby Locke and Peter Thomson were two of the Open’s best.”

“They had superior minds. Totally unflappable. They weren’t the longest hitters, but they were both exceptionally patient people and players.”

“He won The Open five times and he used a 3-wood off the tee most times! He‘d find the middle of the fairway, hit the greens, two putt, move onto the next hole. Simple.”

“Thomson had this thing where he stroked his cheek.”

“When I was young I was ambitious and I made it my aim to play with the best and to learn from them – and so I played with Thomson and Locke. They both stroked their cheeks. Locke was Thomson’s mentor, he picked it up from him. It was a little thing they did after a bad shot. It helped them move on.”

“Locke’s putting was the best ever.”

“He used to trap the ball with a closed stance. Remarkable to watch and the greens then were terrible, like the fairways of today. But he was the best there’s been.”

“He’s the most underestimated, under recognised golfer ever.”

“Locke was unbeaten in South Africa for 20 years. 20 years! Sam Snead went there to take him on and even he couldn‘t beat him. I chaperoned Sam to the 2000 Open and I said to him on the plane: tell me about Locke. He said he drove him crazy. Snead was a big strong man who’d out-drive Locke by 30, 40 yards and he never beat him once. Not once.”

“They used to have side matches in the States. They’d set the courses up with pins on the right of the green, to try and negate Locke’s big draw. Didn’t make any difference. He still beat them.”

“Tom Watson was an unbelievable putter.”

“No-one realises what an amazing putter he was. I mean amateurs don’t. Pros know. The pros that really know, know. Everyone remembers the period he went through when he struggled on the two footers but, wow, Tom he made more putts than anyone. Unbelievable and with a stroke that wasn’t a smooth thing. Not jerky but not smooth either. He was deadly.”

“Troon has less level lies on the fairway than anywhere else.”

“That’s my over-riding recollection from 1973. I never seemed to get a level lie. Sidehill, uphill, downhill, the lot. Sandwich is the closest to it of the other Open rota courses. So you need that patience. You can hit a great shot and need 3 iron but you can’t hit it because you’ve got a hillock in front of you in the middle of the fairway. Deal with it.”

“I played all my practice rounds with Tom Weiskopf in 1973, the year he won.”

“He was a hell of a player, but that week he really embraced links golf. He’d accumulated the knowledge and understanding. It all came together.”

“He had a volatile temperament.”

“He was a great friend of mine and such a perfectionist, but if he missed a cut he’d be furious. His wife would have to leave his dinner outside the hotel door, knock and leave. But that week he was patient.”

“It’s not about having the game really.”

“He always had the game – and you do need it, but it’s not about the game really. It’s the mental approach. It’s up here. The Open tests it like no other. And that year Tom had it.”

“When Ernie Els won three years ago we had breakfast together before the final round.”

Tony Jacklin is an ambassador of Glenmorangie, the Spirit of the Open. They’re holding a competition to find the Greatest Finish of the Open. Watch the video and then cast your vote –