Tiger and his sponsors – a study

O’Leary Analytics has researched the coverage Tiger Woods and his key sponsors have received over the past three months.

Stephen O’Leary is a Dublin-based online media expert whose company O’Leary Analytics monitors over 100,000 news sources on the internet, enabling them to accurately assess the impact of big news stories on individuals and brands. Here he gives Golf365 a special first-look at his latest report on Tiger Woods’ sponsors….

On Friday, February 19, 2010 Tiger Woods finally spoke. After almost three months’ silence, the number one golfer in the world took to a podium in Sawgrass Clubhouse in Florida and addressed the nation.

It was the moment many people had been waiting for since the night of November 27th 2009, when reports emerged that Tiger had been involved in a car accident. The revelations that followed the accident damaged, and continue to damage, the reputation of a man who is considered the most recognizable sports star on the planet.

It was this reputation, prior to November 27th, that led to Tiger Woods becoming the best-paid athlete in the history of sport. He was the first billion-dollar athlete, a man who was the hottest property in sports marketing, branding and endorsement.

However, as the stories of his affairs and cheating emerged, the key companies who had once competed with each other to sign “Tiger” suddenly decided he wasn’t quite what they wanted. And you can hardly blame them:

Gatorade ran Tiger’s image along with the slogan: “Is it in you?”

Accenture told us to: “Go on. Be a Tiger”

Gillette reminded us Tiger was “The Best A Man Can Get”

And perhaps most unfortunately, Lasik Vision Correction asked “What could you and Tiger Woods have in Common?”

Other sponsors, including Tag Heuer have “scaled back” their marketing campaigns featuring Tiger. However, his main sponsor, Nike, and the computer game company, EA Sports, have stood by Woods.

Despite publicly distancing themselves from Tiger Woods, which sponsors have remained associated with his name? O’Leary Analytics has researched the coverage Tiger and his key sponsors have received over the past three months.

On the 12th December 2009, Gillette announced they were limiting Tiger Woods’ role in their marketing campaigns. The move was the first in a series of announcements by key sponsors. 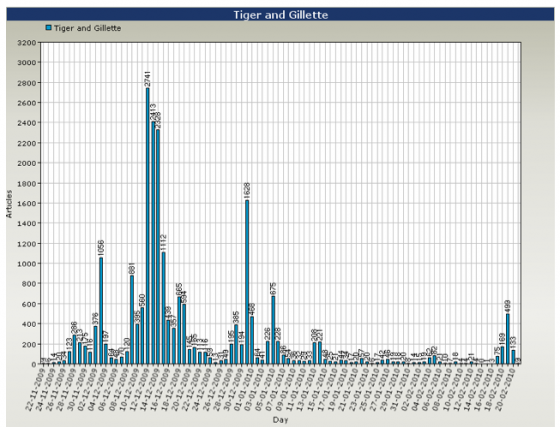 As the first sponsor to publicly announce they were reacting to the allegations, coverage was always going to peak. However, in the weeks and months since then, their Tiger coverage has been minimal, apart from a minor peak this week (of less than 1,000 articles), following Friday’s press conference.

This graph is based on the same search criteria, but presented in a week by week breakdown of all mentions of Tiger Woods and Gillette (in the same article) over the past 12 weeks. 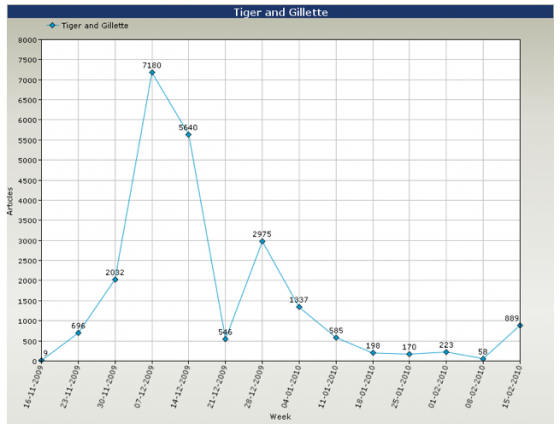 A day later, on 13th Decemeber 2009, Accenture announced they were ending their six-year sponsorship arrangement with Tiger. In a statement they said: “Given the circumstances of the last two weeks, after careful consideration and analysis, the company has determined that he is no longer the right representative for its advertising. Accenture said that it wishes only the best for Tiger Woods and his family”.

Like Gillette a day previously, the announcement caused a surge in coverage for Tiger and Accenture, with over 3,000 articles published world wide on the day of the announcement, as the bar chart below illustrates: 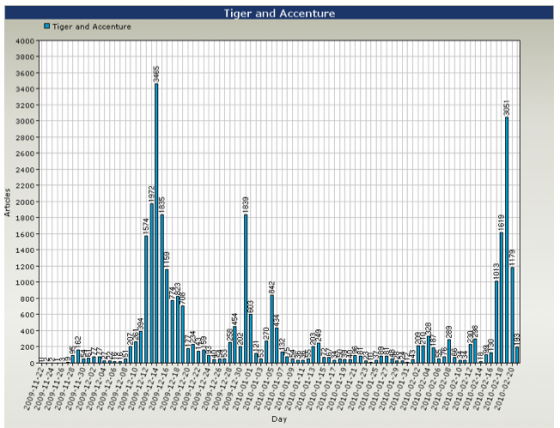 However, unlike Gillette, the coverage didn’t end there. As the title sponsor of the Accenture Match Play Championship, a World Golf Championship event, Accenture retained a large interest in professional golf. Tiger was important, clearly, but unlike with Gillette, he wasn’t the only connection the company had with golf.

With this in mind, Tiger’s press conference, coming as it did in the middle of the Accenture Match Play Championship, led to a lot of commentators, and players questioning the timing. Accenture claimed they didn’t think it was a deliberate attempt to undermine their tournament

Whatever his reasons, it’s clear the timing led to renewed coverage for Accenture and Tiger, as illustrated in the line graph below. In the week of his announcement, over 7,000 articles were published mentioning both Tiger and Accenture: