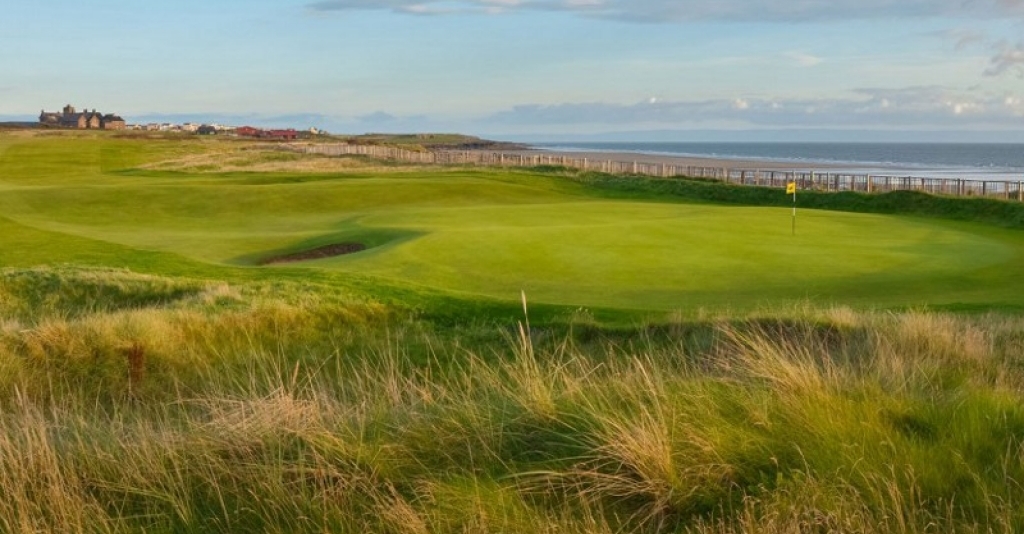 There are many concentrated pockets of quality seaside golf in Britain and Ireland; towns like Gullane in Scotland, Southport in England, Portush in Ireland and Bridgend in Wales.

Halfway between Cardiff and Swansea, easily accessed by the M4, Bridgend might be unheralded but it boasts a portfolio of courses that would make any golfer purr.

An unexpected corner of golfing country

Turns out Bridgend and the surrounding area confounds most people’s preconceived ideas about it: there’s world class surfing on the beaches and mountain bike trails that sneak through forests up in the valleys; there’s an Elf-steddfod and one of the world’s biggest Elvis festivals.

It’s also a popular location for TV and film companies, with the Merthyr Mawr dunes, the second-highest in Europe, being used as backdrops for Lawrence of Arabia and Torchwood.

The dunes are also a clue: this is good – very good – golfing land.

On a crisp autumn morning, P&K, which co-hosted this year’s Amateur Championship strokeplay rounds, is the perfect place to start my trip with the course looking superb beneath a blue sky.

The front nine climbs steadily across high ground which offers wide views of the nine to come and the Bristol Channel beyond. It’s more open than the back nine, but fast running, well protected by sand traps, with the holes using the natural sweeping contours of the land.

The par-three fourth is a classic linksland short hole, calling for an accurate tee shot to avoid six pot bunkers which protect the putting surface. The two pars-fives (the 5th and 9th) are both downhill, tempting from the tee and with the approach, but with more bunkers to threaten a loose shot.

Rather than hit the turn, at P&K you cross the road, and the course begins to sneak between dunes and gorse. If you spent the front nine like a seagull, looking down on the coastline, on the back nine you feel more like a rabbit, hopping and skipping across the turf.

The far corner of the course, which takes in the 11th tee to the 15th green, makes for a magical stretch of golf. Tee shots require bold strikes through and across dunes, whilst the land always offers approach shots a smart route to the putting surface, but get it wrong and more bunkers await. It’s a little reminiscent of Royal Birkdale.

Perfect morning for golf and great spot to do it, at Amateur Champs strokeplay venue @GolfPandK. @BridgendBites pic.twitter.com/aNO8x4NfLo

From the 14th and 15th tees the views are stunning, across more dunes to the sea and, in the far distance, Royal Porthcawl. It’s a friendly course, too, members offering a smile and inviting me to join them. Little wonder the great golf architect Mackenzie Ross called it “a golfer’s paradise”.

Across the River Ogmore, Southerndown shares the fast-running nature of its neighbours, but it is not a links course. Instead, a unique limestone-heath setting pemits free drainage and allows gorse, heather and bracken to thrive.

Some of the great architects of their time have been responsible for tweaking the club’s 18 holes into their current configuration – the likes of Herbert Fowler, Willie Park, Harry Colt and Donald Steel. The result is a springy, bracing, fun layout which offers spectacular views of the sea and the Merthyr Mawr dunes.

I recently played Castle Stuart in the Highlands, a modern course which prides itself on infinity-edged greens that create a sense of place, drawing the surrounding views into the golf course.

Whether by design or accident the many hands who have formed Southerndown have achieved something similar and it’s not long before you’re aware of it – the 2nd and 4th greens sitting on the horizon, with the dunes, beaches, ocean and the distant coast of Devon beyond.

The par-three 5th is a magnificent hole which requires a fearless strike across a valley to a shallow green protected by pot bunkers and the sloping land – visually intimidating, but beautiful too.

Big thank you to @TwoTonTedSez, who gave me a great line for every shot at beautiful @Southerndowngc. Every now and again I hit that line. pic.twitter.com/u81wKZgZDV

The course continues over the hill, always testing but consistently fair, before a stunning conclusion that features unique fairways – fiercely sloping on 17, intriguingly split on 18 – the latter sweeping down to the clubhouse where I shared a couple of drinks with my companion for the round, George, and chat to members whose pride in their course is obvious and well merited.

First thing next morning I was at the course which hosted the 2014 Senior Open and this year’s Amateur Championship. Heavy, dark (but rain free) clouds scuttled across mostly blue skies, creating an amazing light to attack one of GB&I’s finest courses – and I had it all to myself.

Rounded off my @BridgendBites trip with a wonderful morning at @Royal_Porthcawl. First out as the sun broke through the cloud. pic.twitter.com/NWzfMWx8HD

Beautifully prepared and presented, sitting right on the edge of Rest Bay, there are few better places to spend an early morning for a golfer.

The first three holes roll behind the beach, almost like the waves you hear crash beyond the fence. Then you cut inland and up a hill until you take a sharp right with the tiny but dangerous par-three 7th – just 119-yard long, but don’t miss the green.

From the high point of the 9th green the course plunges back towards the sea before turning away again with yet another stunning par-three – the 180-yard 11th which is protected by an daunting diagonal line of bunkers that play tricks with your depth perception.

Back in the 2014 Senior Open Colin Montgomerie finished the week three shots clear of the field on 5-under. Problem was Bernhard Langer did better than that: he ended the week on 18-under, a frankly ridiculous decimation of a quality field on a course only five players broke par on.

As I tucked into the back nine, I pondered this feat and cringed at how far behind him I would have finished over 72 holes. But not for long, because it was too much fun and one of the best holes is kept for last (for most of us, anyway – at the Senior Open the 17th hole became the 18th).

The real 18th, which drops sharply to the sea, has a green which repels a genuinely errant shot, but rewards those who make a clean hit or make smart use of the land. With the waves slapping into the rocks beyond it makes for a spectacular conclusion to a round.

The Senior Open Championship is back at @Royal_Porthcawl next year. Superb experience and in wonderful condition. pic.twitter.com/22ygnQQwjx

And afterwards the clubhouse demands you spend time in it – looking out to sea it’s like a cross between a scene from the imagination of Charles Dickens and a captain’s quarters on a 19th century ship. The perfect spot to reflect on three wonderful golf courses.

There are two excellent spots to plan your trip around.

The first is the Coed-y-Mwstwr Hotel, a Victorian mansion with good dining, relaxing bar, gym and complimentary golf at the adjacent Coed-y-Mwstwr GC.

It’s less than five minutes from the M4 and all three courses are no more than 20 minutes drive. The name means ‘Whispering Wood’ in Welsh which hints at the relaxing atmosphere.

In nearby Laleston, The Great House offers a friendly welcome, rooms and stunning dining – original flavours made from seasonal and local produce.

The bar is cosy, the ideal spot to relax between the golf, chatting around the fire, nibbling on the superb hors d’oeuvres and planning your next visit.