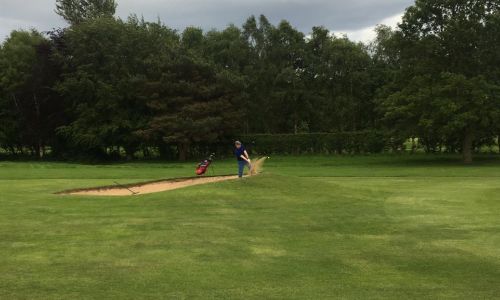 Golf365’s Pete Farries recently took on Blackwell Grange Golf Club with some enemies/friends – and recalls the battle in vivid detail.

By here, I mean sitting at my computer in Golf365’s clubhouse, and by my computer I mean the company’s computer (I’m not getting into that mess again).

Last Friday however, I was at Blackwell Grange Golf Club.

Last Friday I had hit well. My usually wild and slice-heavy driver was throwing out straight shots like I’d accidentally bought a Srixon Cannon. My iron play was like swinging through O% fat yoghurt, and around the green? If I could have picked up and dropped the ball where I wanted it, then it probably still would have been a lot better, but I was still pleased. I also putted a large number of times. A large number.

I was there to take part in the next round of “The YGA Forever Friends Non-Invitational Golf Battle Epic”, where the prestigious Mr Tulloch Trophy was up for grabs.

For those of you who haven’t seen this trophy before, and why would you have done, it looks like this… 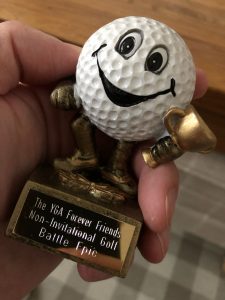 Now for those of you who haven’t heard of this private tournament between four lifelong friends who you don’t know or care about, then I’ll fill you ignorant hogs in. We all play together as often as we can for four months, it is a stroke play-only battle, and your average over the rounds you’ve played is all that matters (we had to introduce the averaging system when one of our warriors received a baby, who if I wasn’t the Godfather to and if I didn’t want to protect with my life I would wish ill for forcing us into this R+A style rejig).

None of us have a handicap, and we are all of pretty much exactly the same standard, so the competition is always genuinely fierce. The other thing is, none of us are very good. None of us are very bad either. My best before I broke my wrist thrice (football/old man style shower fall/play fight) was 87. I can’t get close to that these days. It sits in my brain like the memory of the most attractive person who ever fancied you before time ravaged your youthful soul and you entered the glorious cycle of caffeine consumption.

Now don’t go thinking we’re chunking our way around. No one is embarrassing, everyone can get in the mix for birdies and usually everyone registers at least a few pars on the way round. Why are we no good? Because the bad holes are bad, there’s still the occasional chunk in there, and if a round goes south, to quote Wordsworth “For the love of Christ this is grim”.

I hit 100 on Friday and won, not a score that would usually come close. The Baby-Daddy couldn’t play, so me, The Beard and The Height headed out. I hit a front nine of 46, which included two pars and three birdie opportunities I masterfully worked into bogeys.

In fact everything was going pretty nicely until I hit “The Hell Hole”. Now I’ve played at Blackwell a few times a year for well over a decade now, it is a cracking course, my dad is a member there. He loves it. So do I. Everyone is lovely, the range is cracking (they’re also installing some new super futuristic bays), and the course is kept well.

This hole is horrible. The course itself is a lovely mix of testing and simple. There’s a lovely little 100-odd yard par three over water, where a lovely PW or 9i is very very satisfying. Plenty of very fair par fours, even a par 5 10th that as long as you get either to the top of the hill or over it on your drive, you can attack. There are a couple of holes I struggle with and really I shouldn’t too. This one though. Oh man. Off the tee my cannon malfunctioned (matron) and the ball slid with ill intent into the bushes and long grass to the right, to be seen next only by another golfer who is desperately trying to find their ball. I knew I wouldn’t find it, I’ve been down there enough to know, so up I stepped again.

It’s very rare you get to live exactly the same moment in your life over again, but I dropped into Punxsutawney and the ball had the same heartbreaking flight. Gone again. A couple of furious hacks up the steep hill to a flag that’s tough to see, guarded by two sandy holes that eat balls the way Scooby Doo attacks a ham sarnie, and before I knew it I was in double figures.

Why does this happen? How is it possible that I can be in the mix for birdies and hitting drives just short of 300 yards (and for once straight) to effectively ruining my entire round in 2-4 shots? The double figure score mocked me the whole hour’s drive home. I could feel the number burning through the lining of my bag, almost screaming at me from the boot, as though I’d kidnapped a monster I myself had built, before realising that my Monkey-Badger Butler would never work.

My head goes. You’ve seen John Rahm right? You’ve seen Sergio of late? You’ve seen a litany of others who aren’t Spanish losing their minds. Well they’ve got nothing on me. Golf365’s Dave Tindall once gave me a Fatherly dressing down at Baildon Golf Course when he said, in a very un-Dave like way “if you calmed down 50% you’d be still be at furious”.

I’m trying to work on that. My aim is to get back to high 80’s by the end of next year. That’s a lot of shots to make disappear. I think some on course deep breaths will likely take 4-5 of those away before I lift a club. Easier said than done mind.

“But Pete, what was the point to this article? What was the reason you wrote this article, other than to keep yourself in Blue Ribands and replacement balls?”

Well I guess the point is this. Golf is hard. Golf is very very hard. I mean it is hard. It is a hard hard thing. Every round sits on a knife edge, one slice, one three putt, one tiny tiny lapse in concentration and the round is done. It’s over.

And yeah yeah I know. A misplaced pass can lead to you conceding a goal/try. If you don’t move at the right moment a serve goes by you.

So why, to paraphrase Wordsworth, why “For the Love of Christ” does it hurt so much more in Golf?

Because we’re human, and Golf is a sport that most mirrors life.

Nothing good that you do will ever truly matter, because you’re probably going to make a massive mistake any second and ruin it all.

Still, it’s nice to head out and have a potter about in a shaped field.

Anyhoo, I’m second in the YGAFFNIGBE at the moment, and there’s another game up soon. My plan is to calm down where I can, tighten up my putting (which is dreadful presently) and consistently beat myself up for not getting a hole in one off every tee.

I’M DONE WITH YOU NOW.