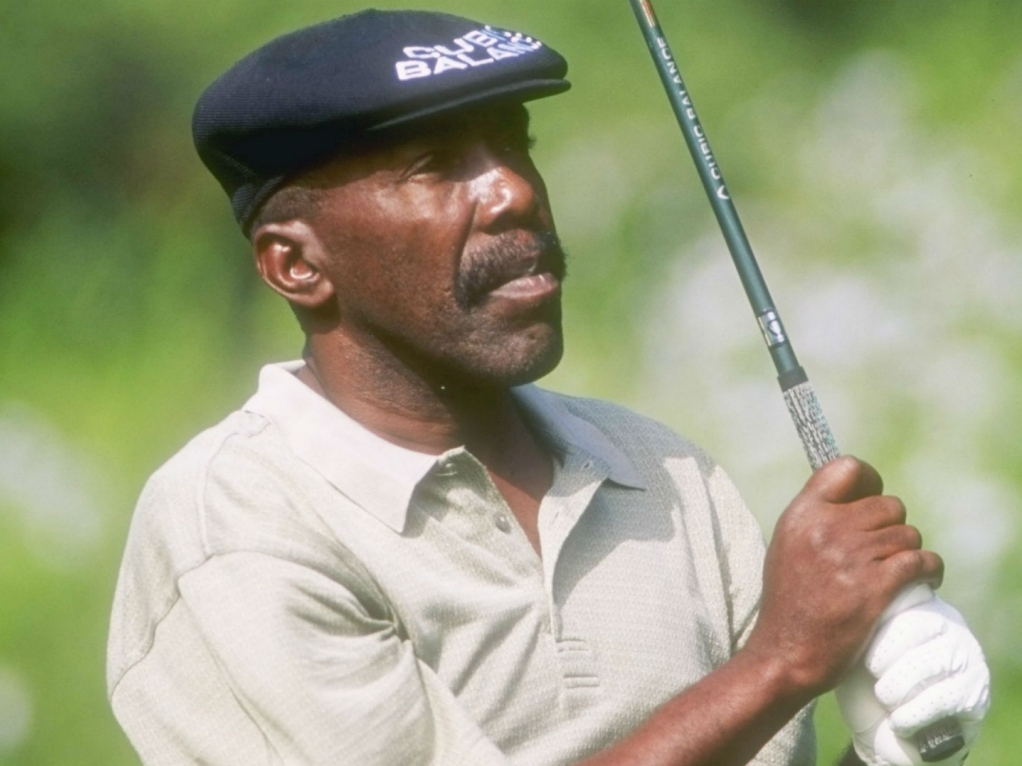 The Ryder Cup is a monster, with tales repeated every two years which remind us of the drama and tension of golf’s greatest head-to-head rivalry.

But some stories have slipped out of our grasp – and they deserve telling.

Born into poverty, Peete endured a disrupted family life, had a crooked arm (the consequence of a childhood break which wasn’t straightened), didn’t play golf until he was 23, was self-taught, and frequently encountered racism both on and off the course.

None of that stopped him becoming one of the sport’s most accurate drivers and a 12-time PGA Tour winner, but something *did* prevent him from playing on the US team in 1981 – the lack of a high school diploma.

Yes, you did read that right.

In a sport bursting with idiotic rules none has been more absurd, and the story actually gets more ridiculous.

Helped by his wife Peete spent the next two years passing the necessary exams and so, when he qualified to play on the 1983 and 1985 teams, he was permitted to play.

Rather than, you know, the PGA deciding it was a nonsense qualification criteria in the first place and quashing it.

Nowadays it is hard to believe that it was once difficult to tempt big corporations to back the Ryder Cup, but in 1981, as Ross Biddiscombe writes in his excellent book ‘Ryder Cup Revealed’:

“Sponsorship prospects looked so bad at one stage that the best offers on the table consisted of £80,000 worth of cigarette coupons or £100,000 Green Shield stamps.”

“We need a tented village, 24 cashmere sweaters and a burger van. Who’s got the Nectar card?”

Biddiscombe also discloses that in the early 1980s television companies were less than in complete thrall to the Ryder Cup. The Sky Sports team is probably very close to self-combustion with excitement ahead of this week’s match and yet, in 1983:

“Roone Arledge, the president of ABC Sports at the time, is reported to have made a rather unusual offer to the PGA of America: he wanted to pay them back $1 million in order that he did *not* have to broadcast the Ryder Cup from PGA National.”

In his autobiography ‘I Think Therefore I Play’ (a marvellous read, full of insight and dark humour) Andrea Pirlo, the trotting general of the Italian midfield, recalls the president of Juventus, Andrea Agnelli, using the Miracle at Medinah as motivation for the team when they were suffering a dip in the 2012-13 season.

Agnelli explained to his squad that, despite being in all sorts of trouble, the European team refused to wilt.

Pirlo writes: “In essence, he was talking about people who wear caps with visors on their heads. Who go about with clubs in their hands and shiny shoes on their feet. Two groups of well-to-do gentlemen out for a stroll on perfect lawns. And yet he had us absolutely captivated.”

Wonderful stuff. Withering contempt followed by the knowing confession that he was intrigued in spite of it all. Juve went on to win that season’s Serie A.

There will be much talk of bravery and valour in the coming days, but few have displayed those qualities like Skip Alexander.

In 1950 the American was the sole (but broken) survivor of a plane crash, who then underwent between 17 and 75 operations (accounts vary; 17 is bad enough) and who, despite the physical and mental trauma, took his place on the 1951 American Ryder Cup team in his home state of North Carolina.

“My hands were all burned and had to be skin grafted,” he said years later of the accident which left him enduring agonising plastic surgery to repair the severe burns which covered 70% of his body. “The fingers were contracted so tightly that I didn’t have any openings. The doctors opened them up. They took a knuckle out and fused the remaining two knuckles together so they would fit a golf club.”

His local newspaper, The St Petersburg Times, wrote at the time: “His hands were twisted so that his fingers stuck out at odd angles like the scarecrow in The Wizard of Oz.”

His accumulation of so many qualifying points in 1950 made him an automatic pick at the end of 1951 and with just two series of matches (four foursomes, eight singles) and ten men in the squad, some assumed captain Sam Snead was just taking him along for the ride – and indeed it was only when Duke Harrison got sick attending an American Football match on the rest day that Snead turned to Alexander.

Some still suspected that Snead played Alexander against GB&I’s strongest player, John Panton, as a throwaway. If he did, no-one read the script.

“Since the accident I had never walked 36 holes,” said Skip, “and it was a 36-hole match. So every time I played a hole I wondered if I could play the next. But it worked out all right.”

Working out “all right” was a relative concept, because: “I was all bandaged up and my hands were bleeding.”

And yet, brilliantly, absurdly, wonderfully, Skip Alexander was winning. Better than that, he was trouncing GB&I’s best bet for a point.

“Panton was the Vardon Trophy winner, the Order of Merit winner, the leading money winner,” said Skip. “I beat him 8 and 7, the biggest margin that anybody had won by until Tom Kite tied it in 1989.

“I three-putted number ten, though, in that afternoon round, or I might have won 9 and 8. I remember wondering if that was the beginning of the end and I wouldn’t win another hole.”

He had no such trouble, completed the win and few in Ryder Cup history can match it.