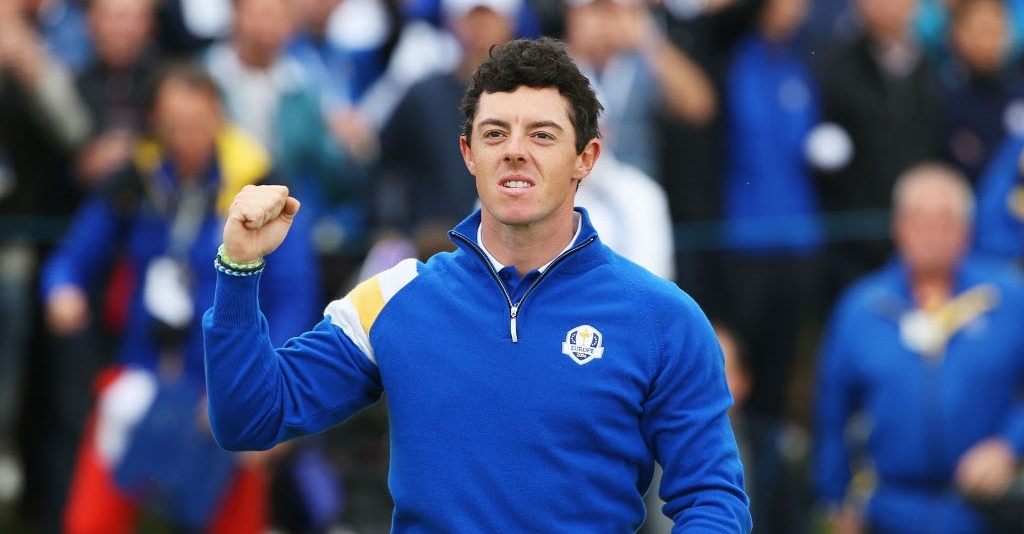 Seems simple, doesn’t it? Oh no. This is the Ryder Cup, it’s way more complicated than that.

Here are a few of the factors which will determine the destination of the trophy.

Does course form matter? Maybe, maybe not. But it’s a fact that 8 of the last 10 winners (indeed 8 of the last 9) had more top ten finishers in the previous event played at the course.

If that trend holds up Europe will be lifting the trophy because at Hazeltine, in the 2009 PGA Championship, they had four top ten finishers (McIlroy & Westwood T3, Kaymer & Stenson T6) to America’s two (Dustin and Zach Johnson T10).

In 1983 Europe came close to finally winning the Ryder Cup and afterwards Seve Ballesteros implored his crestfallen team-mates to learn a lesson: that having come so close, next time they could cross the line.

Before then they won just 2 times in 25 matches, with one tie. It’s an astonishing turnaround and one the Americans are struggling to withstand.

On the brink of history

This could be some week for Lee Westwood. Not only is his best friend captaining the team, but he himself is primed to top some very big names in the game.

With 23 points Westwood has only Colin Montgomerie (23.5), Bernhard Langer (24) and Nick Faldo (25) ahead of him in the all-time European points scorer lists.

If he assumes number one position he is likely to top other tables along the way. He needs one point to become Europe’s leading foursome points accumulator and 1.5 points to top the fourball list.

With Ian Poulter in a buggy this week his spot at the top of the European points percentage table is under threat from his friend Justin Rose. Poulter has grabbed 72% of the points he has played for, Rose is hot on his heels at 71%.

Europe has never won four matches on the bounce (it goes without saying GB&I never managed it). The continent completed a hat-trick through 2002-04-06 and again in 2010-12-14 so they are on the cusp of something special this week.

Phil Mickelson’s 11th appearance this week is a record for an American, but it’s been far from plain sailing.

In 41 matches played he has collected just 19 points. He is, however, USA’s greatest collector of fourball points with 8.

2 appearances, 8 matches, 0 win, 4 halves. Rickie Fowler is too good for that miserable record to continue. Isn’t he?

He may have been on the losing side two years ago but Patrick Reed made an impression on everyone. He surged round the course on a diet of adrenalin and gleaned 3.5 points from his 4 matches.

JB Holmes has played just the once, in 2008 on home turf in Kentucky, and was also high on excitement, at times almost throwing himself off his feet as he lashed at the ball. He was also unbeaten, taking 2.5 points from 3 outings.

Jordan Spieth has lost just twice in 10 fourballs and foursomes in the Ryder and Presidents Cup. Spieth and Reed are 3 and 0 when paired together.

Seve-Olly-Sergio have been the Three Musketeers of the Ryder Cup (if you overlook that the Musketeers were French). But they are far from the only Spanish golfers to make an impact. Jose Maria Canizares, Jose Rivero and Manuel Pinero were key figures in the 80s, and Miguel Angel Jimenez over the last 20 years (oddly beginning his journey as a vice-captain in 1997).

Is Rafa Cabrera-Bello next in line? He has form in match play. He was third in both the 2012 Volvo World Match Play and this year’s WGC version.

And will he play with Sergio? European captains love to pair continentals and if it happens in the foursomes, Rafa will be laughing: Sergio has wrapped up 10 points from his 13 alternate shot matches, with 9 wins.

Henrik Stenson’s involvement in the recent FedEx Cup play-offs was limited by a long term knee injury, which he was protecting ahead of this week. Two years ago he formed a magnificent partnership with Justin Rose which claimed three points – how many matches will the Open Champion manage this week?

Both teams will be using numbers like never before this week. Part of the USA’s task force remit was to utilise analytics and Darren Clarke has called upon 15th Club, a stats team who also work in football.

The idea is that no partnership will play a hole with both players unsuited by the challenge. Theirs is, of course, just one of many factors Clarke must take into account, but this year the statsmen are taking it to another level.

Communities under threat: in the first set an individual steps forward to provide a solution, in the second set the community comes together. It’s a cultural thing.

I wrote an essay about it at university. No idea if it translates to the Ryder Cup, but I sometimes wonder.

There’s an intriguing quote from Martin Kaymer in the video below. He talks of the need for honesty in the Ryder Cup, the ability to discuss weaknesses with team-mates.

That’s quite an unusual take for a professional golfer and implies that successful teams need trust in one another – you wouldn’t admit weaknesses to players you’re uncomfortable with.

There are many factors mentioned above and the captains will have considered many, many more.

No captain will get it all right but he could get almost all of it right and yet it could still all come down to one 8-foot putt.

If it drops the captain’s a genius.

If it misses he’s a clown.