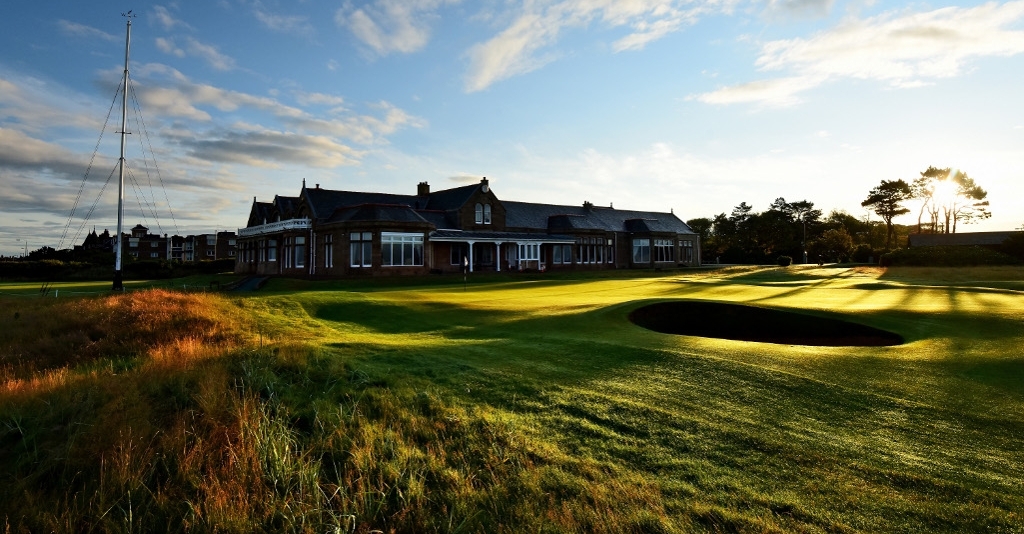 As Royal Troon prepares to host its ninth Open Championship, we take a look at what the Old Course has in store.

Named for a chain of rocks situated just a few feet away from the Firth of Clyde beach nearby, the opening hole presents a fairly straightforward challenge first up.

Bunkers left call for a straight or slightly right drive, followed by a lofted iron to a slightly elevated green protected by several more sand traps.

The reef lying offshore between the second and third tees gives this hole its name.

Another accurate drive required to avoid the bunkers, with a mid-iron into another well-guarded green.

Gyaws: an old Scot's word meaning furrow or a drain, and the name given to the burn, which which traverses the 16th and 3rd fairways.

An accurate and precise tee shot is needed to finish short of the burn that crosses the fairway, and right of some deep bunkers left. The green slopes away from the player.

Named for the village of Dunure and its ruined Castle that overlook the sea south of Ayr, the first of the par fives dog-legs right with a dangerous bunker looking to catch any shots that attempt to cut the corner too close.

Most players will get into position with their second shot before hitting a third into a two-tiered green.

Named for the old Kennedy Castle ruin south of Ayr, this lengthy and difficult par 3 requires a well struck long iron into the center of a green protected by bunkers left, front and right, taking care to account for the prevailing wind blowing off the beach.

The Turnberry lighthouse can be seen from Troon. It marks the site of Turnberry Castle, the childhood home of Robert the Bruce.

The longest hole in Open Championship golf, two accurate shots are required to avoid a number of bunkers along the way, before a third shot is played into a narrow green framed by sand dunes on both sides.

Named after a battle fought in 1882 – shortly before the hole was created.

A magnificent hole, played from an elevated tee situated on top of the dunes. The fairway dog-legs sharply right, with a sandhill and bunker set into the angle of the dog-leg. The second shot is lofted over a slight gully into a green flanked by two sandhills.

Playing just 123 yards from tee to green, it is the shortest par three in Open championship history. The narrow green is just 35 square meters and the left side is protected by two bunkers, with a large crater bunker in the foreground. The tee shot is from an elevated spot, making it very hard to gauge the distance.

Named after the village of Monkton, which this hole faces.

A fairly straightforward challenge, providing you aren't errant off the tee. Heavy rough flanks both sides of the fairway, while two bunkers guard the left hand side. A mid-iron is required to find an elevated two-tiered green.

No prizes for guessing where this challenging hole gets its name – the large sandhills facing the tee shot.

Gorse on the right and a large gully on the left lie in wait to punish an errant tee shot, while prevailing winds add to the challenge. A tough, long second shot awaits into a plateau green set into the side of a hill, with a sharp drop on the right.

Named after the railway line running alongside the 11th hole.

A long and treacherous par 4, The railway is close enough to present a danger for your first and second shots – never mind the thick gorse that runs alongside it.

A wooded area nearby used to be home to many foxes. Though the woods have mostly gone now, a few foxes still remain.

A slight dog-leg requiring a drive played over a rise into the narrow neck of the fairway. A ridge of rough and gorse lie in wait on the right. The second shot is played into a two-tiered green, with a drop-off down a bank to the left and a bunker on the right.

The main features of this hole is a second shot played into an elevated green, and players are advised to take one more club than you'd normally opt for.

Named after part of the Fullarton estate, which is situated nearby on the north side of the railway.

The green on this par 3 is well guarded by bunkers left and right, so a strong and straight tee shot into the heart of the green is called for.

This hole is named after a fortification near Alton, which was home to the Fullarton Family for centuries.

Another one of the longer par 4s, and the first of four very demanding finishing holes. A drive slightly left of the fairway sets up a lengthy second shot to a flat green resting in a hollow.

A fresh water well is situated nearby this hole, the longest on the inward nine.

The tee shot is played to a flat fairway, taking care to lay up short of the burn. The second shot should stay left to give the best position for the shot to the green, which is well guarded by several bunkers.

You'll find plenty of these around the Links, and this hole in particular.

The toughest short hole on the course, which can be made even tougher when playing into the wind. The plateau green falls away sharply on both sides, and is well guarded by bunkers front, left and right.

The name of an old farm which used to be situated nearby, though has been gone since the turn of the century.

The final hole requires a straight drive to avoid fairway bunkers left and right. The green is well protected by hazards – left and right and short of the green, while a long second shot could finish out of bounds on the path behind the putting surface.