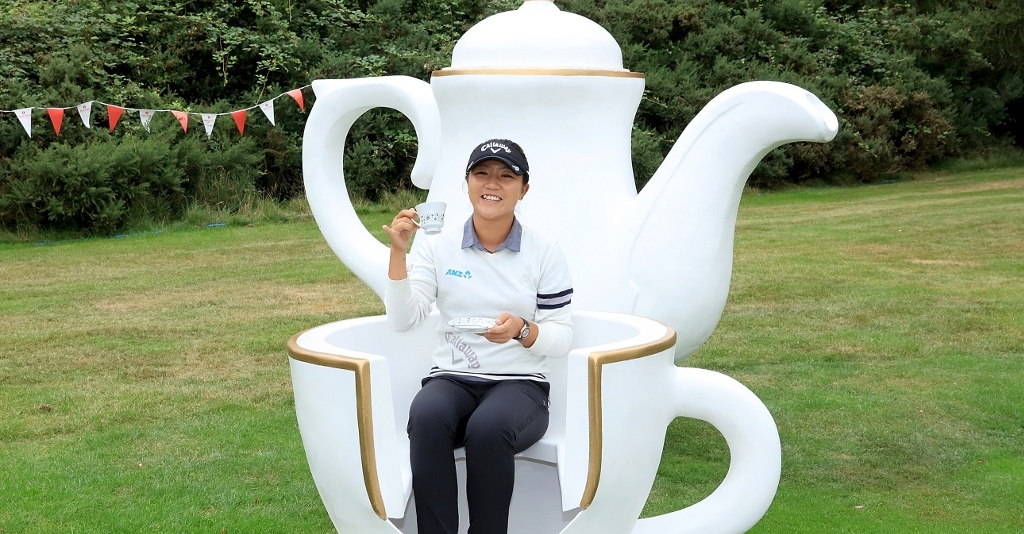 Our Matt Cooper is at Woburn Golf Club all week covering the Ricoh Women’s British Open – here’s his diary from inside and outside the ropes.

The course has been a topic of conversation all week because no-one can quite work out what is going on.

The players like the course, but the enthusiasm is restricted because you sense they all feel they should be playing a British Open on linksland (if this were a regular event there would be no such conflict and the opinions would be no buts in the equation).

From the promoters point of view you can fully understand the decision to take the event south (to reach another part of the country, one that draws bigger galleries) and Woburn in particular (Charley Hull’s home course).

But you wonder why they didn’t play the Duke’s course. It is the track Hull favours and is also a more traditionally British test of golf. In going for the Marquess they’ve handed Hull a dud opportunity and relinquished the Britishness of the challenge.

You assume that the venue favoured promoting the Marquess course, but if that was the reasoning it has been somewhat stymied by the LGU set-up which almost no-one seems happy about.

The course is playing incredibly short – comfortably the shortest layout in LPGA major golf this season – and that has had multiple side effects: it further takes Hull’s home advantage out of the question (she’s used to playing it from the back tees), it has limited the scope of the playing options (because of the dog legs and bunkering everyone is hitting to the same spots) and that means that those same spots are riddled with divots holes.

Let’s end on a positive however. The crowds really have been good, the course looks magnificent and it is a real pleasure to see women’s golf in the UK played on a stage that looks like genuine tournament golf: banks full of fans, a backdrop of lush trees, the vivid red of the sponsors and the dark green of the trees adding great colour.

The stats ahead of the final round

Ariya Jutanugarn leads on 16-under, from Mirim Lee on 14-under, Mo Martin at 11-under and Catriona Matthew on 10-under.

Not one of the last 20 winners has been outside the top ten after 54 holes (no-one has overcome more than a four shot deficit in that period).

Jutanugarn has held three solo leads on the LPGA – all of them this year, indeed all of them in May of this year – and won each time.

Martin and Matthew are past winners of this event – in 2014 and 2009 respectively.

Smile your way to success

Smiling is the new black.

At Royal Troon two weeks ago Andrew ‘Beef’ Johnston became the People’s Champion. Why? Because he smiles and the world smiles with him.

This week Ariya Jutanugarn has revealed that she utilises a smile in her pre-shot routine.

“Yeah, I had to find a pre-shot routine that relaxed me,” she explained. “I was thinking too much about the result. I couldn’t play thinking about it, I wasn’t under control. I really wanted to be happy before I hit the shot so I thought the easiest thing was to smile before I hit.”

Golfers turning on to the Olympics

Sick of golfers finding excuses to dodge the Olympic Games?

It’s not the story here at Woburn.

Yesterday the Spanish team’s golf captain Marta Figueras-Dotti told me that Azahara Munoz and Carlota Ciganda are so excited by participation in Rio her main concern is not pumping them up but calming them down.

In fact when she and Munoz were discussing the reported problems about the fittings in the Olympic village Munoz told her: “I don’t care. I’ll sleep on the floor. I just want to play in the Olympics.”

Catriona Matthew will make up Team GB alongside Danny Willett, Justin Rose and Charley Hull, and she is also excited: “We’re really looking forward to the whole atmosphere. We’re staying in the village, just to get a sense of the whole thing. Hoping to to go the athletics on Super Saturday.”

It’s the big question in the final round – does a golfer watch the leaderboard all day or remain oblivious?

Shanshan Feng revealed today that it’s not an issue she deals with on the final day, but all week.

When asked what she made of Mirim Lee’s first round lead she said: “I didn’t know she shot a 62. I have a habit of not looking at the leaderboard until we finish on Sunday. So I actually don’t know what the others are doing and don’t know where they are at. I only know what I’m doing. I focus on my game and it it’s mine, it’s mine.”

It’s tempting to think that in getting to play a major championship on her home course Charley Hull has got it made this week.

But that would be pretty lazy, one dimensional analysis.

Because the truth is that dealing with widespread expectation is exceptionally difficult. Hull has more or less barred her friends and family from walking the fairways, but keeping the Woburn club members under control is rather more tricky.

It’s all well-meant, but the jolly good wishes create a weight of hope – and somewhat paradoxically the silent expressions of support are almost worse. You know that feeling of walking into a room and thinking everyone has been talking about you? It’s a bit like that for Charley this week.

Little wonder then that her father Dave was seen pacing the clubhouse car park whilst she was making the turn. Or that Hull herself admitted afterwards: “Honestly the first tee shot was probably the most nervous I’ve ever been on a golf course and I never usually get nervous so it was weird.”

She’s also having to face unusual challenges in a familiar place.

Whilst everyone expects her to thrash her way to a low score at the Marquess course the reality is that she normally plays the track from the back tees with her friends. This week the course is set-up rather short and she finds herself hitting more 7- and 8-irons into the greens.

It’s also a different challenge on the greens. She’s used to aggressive rounds against her friends, when “I’m usually bombing them, hitting them really firm because I’m not too bothered hos far past they go. When you’re with your mates you try and leave yourself five-footers to feel pressure, but this is a major. Bit different!”

In the circumstances her 3-under-par 69 was a superb effort. The curious aspect is that she completed her lap of the course in five shots fewer than the world number one, and playing partner, Lydia Ko – if you’d offered her that on the first tee she’d have bitten your hand off.

And yet she went to bed knowing she was seven shots off Mirim Lee’s 10-under-par lead.

Sisters Ariya and Moriya Jutanugarn have made a superb start to the championship, Ariya blitzing a 7-under-par 65 and Moriya a 3-under-par 69.

It was Moriya’s birthday and she explained how the day started in a sweet little mixed zone exchange:

“My sister had already left because she had an early tee time. It was funny, she had written a birthday message on a tissue. She wrote “Happy Birthday Mo” and left it on a little bag. It was a very nice birthday gift.”

“So she forgot to buy a birthday card?”

“I don’t mind about card or tissue.”

Last year’s RWBO was a peculiar affair. I spent the week living in a static caravan with no electricity – a sort of cut-price Alan Partridge – all the while having Donald Trump’s bizarre behaviour hover over everything we did (literally when he was in his helicopter).

And on the golf course itself something magical was taking place.

We arrived expecting Ko to thrive and indeed she did – however it was not Lydia at the top of the leader board by three after 54-holes but the unknown Jin Young Ko.

Ultimately the story did not end in glory – Ko was magnificent early in her final round, but wilted slightly when the then world number one Inbee Park tore into the back nine and her lead – but it was nonetheless one of the most endearing tales of recent major championship golf.

With a sweet smile, and wearing a duffel coat, she demolished the received wisdom which doesn’t merely suggest, but demands, that nobody can play competent links golf without experience.

And yet Ko has almost none. She had arrived in Scotland early on Tuesday, acquired a local caddie and decided to finally hit the course on Wednesday.

On Thursday she shot 68, on Friday – playing in weather so filthy it was nearly dark most of the afternoon – she shot 71 to be T2. A round three 71 left alone n Saturday night.

The secret of her success? Complete and utter trust in her caddie, Jeff Brighton. “He tells me where to hit it and I hit it there,” she said, leaving journalists agog that it could be so simple to do something most insist is downright impossible if you don’t have five generations of Scotsmen in your family tree.

Ko was demystifying links golf with a bashful smile and for most of the final round it remained that way. She was light-footed down every fairway, wrapping herself in her duffel coat between shots, allowing Brighton to point her in the right direction.

It was like watching Paddington Bear take on links golf, without the marmalade and prat-falls. Brighton played the Brown family to perfection. The win may never have come, but the memory has not faded.

Just as at Turnberry’s last Open Championship, the real story was not who won, but who came second.

Keep an eye out for England’s Liz Young this week. She is playing the tournament whilst seven months pregnant and her caddie is husband Jon. It makes the Father & Son Championship look slightly half-hearted.