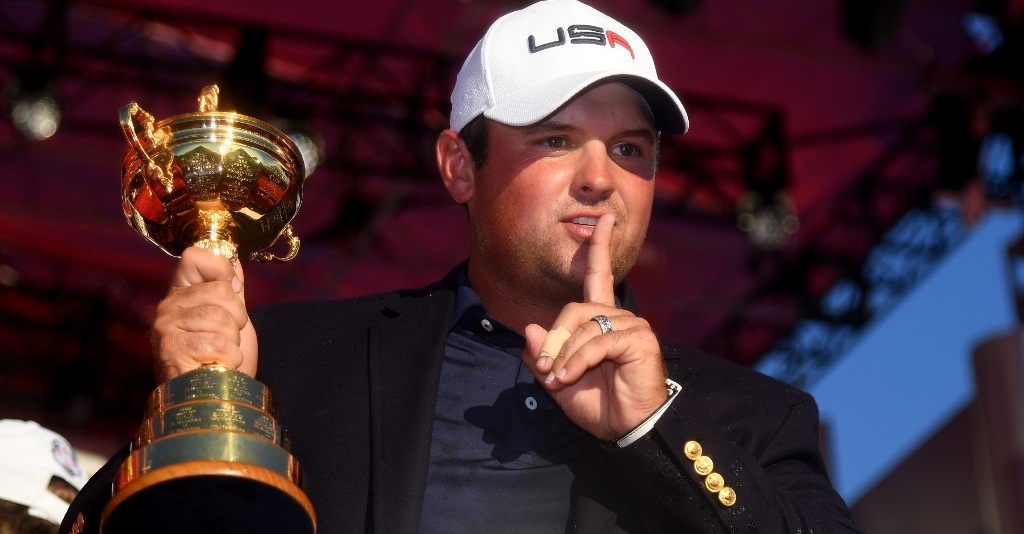 Colin Montgomerie, Lee Westwood and Sergio Garcia have all been labelled the best player in the world without a major title at some point or another, whilst Ian Poulter has taken the notion of peaking for the Ryder Cup to another level entirely, whilst also failing to add a major to the CV.

Dr Bob Rotella is quoted in Richard Gillis' recently published book The Captain Myth as saying: “When the American press writes down who the great players are, they don't list the Ryder Cup in their list of achievements. There is more of that in Europe. Look at Colin Montgomerie, for example, he will go down as one of the greatest players in history, and some of that is because of what he did in the Ryder Cup.”

Rotella adds: “If you didn't win majors in America, you are probably not going to go down as a great player. You certainly won't be regarded as such because you were a good Ryder Cup player.”

There is presumably a long way to go in the career of Patrick Reed – the 26-year-old has plenty of time to win a major – but his career path is currently looking very European.

The man who led Team USA to victory with his lead-out final day singles defeat of Rory McIlroy did so with a fire in his belly that blazed like Poulter's four years ago in Medinah.

Love him or loathe him, you can't fail to be impressed by Patrick Reed's passion for the #RyderCup! https://t.co/wDyben2o2T #GoUSA

His performance over the weekend at Hazeltine National GC was not perfect, but it was pretty damn good.

He drove the ball superbly, hit the ball close from the fairway, was inventive from trouble, chipped in from around the greens, drained putts from distance, and holed out with a steely nerve.

On the first morning he resumed his successful partnership with Jordan Spieth, taking on the unbeaten pairing of Henrik Stenson and Justin Rose; they scooted home for a 3&2 victory, setting the tone for the 4-0 morning redwash.

In the afternoon the result was reversed and when the American pairing allowed the Spanish duo of Sergio Garcia and Rafa Cabrera-Bello to catch them for a half in Saturday's foursomes there were suspicions that they were fading, exhausted by 36 hours of high octane performance.

But Tiger Woods insisted Davis Love III not drop the pair and although Spieth looked increasingly spent in the crucial fourth series of matches, Reed was like a runner who had found his second breath.

Their 2&1 victory allowed them to equal the record number of points accumulated by any American Ryder Cup pairing (five points) and ensured they would take a three point advantage into the final day.

McIlroy wanted to lead his team from the front, he freely admitted as much. Reed was in agreement and they traded punches from the get-go.

Both missed the first green, McIlroy showed the surest touch to guarantee par, Reed then nailed a lengthy par putt to get the galleries roaring.

McIlroy birdied the third, Reed the fifth. They both birdied six and seven. It was exhilirating stuff.

On the par-three eighth Reed held the advantage as they walked to the green. He was pin high with 20-feet for birdie. Spin and the slope had drawn McIlroy's ball back to the front of the green, he had 60-feet of putting surface to negotiate.

No matter, the ball found the bottom of the cup again and the Northern Irishman bounced around the green, responding to, and invoking, the gallery's noise.

When the hullabaloo settled Reed stood over his own putt and rattled it into the back of the hole. Around the green the crowds roared. Around the world millions laughed at the audacity of what they were watching.

The two golfers smiled, tapped fists and walked shoulder to shoulder towards their next battle.

In truth the fireworks had been lit early and the rest of the night was all about the bonfire. They both made bogey at nine, McIlroy ceded 12 (and the lead) to a par.

It was now a battle of will as much as golf. Reed knocked his ball close at 15, McIlroy refusing to wilt, made par, forced Reed to close out the birdie and he missed.

At 16 Reed didn't repeat the mistake, but he did at 17 as McIlroy dug deep to take the match down the final hole whereupon they treated us to a final exchange of high quality

McIlroy blasted a huge drive down the fairway, Reed responded.

Reed's approach dropped eight-feet from the flag, McIlroy knocked his inside it.

Two years ago Reed surprised many by boasting he was a world top five player. It prompted ridicule, mockery and laughter that few bothered to stifle.

He's become a five-time PGA winner and yet 12 major championship appearances have still to reap even one top ten finish.

But today he is talked about by every golfer around the world and stars across his nation's media.

Patrick Reed is a Ryder Cup champion but a major stumbler.

He's an American hero, in a very modern European fashion.