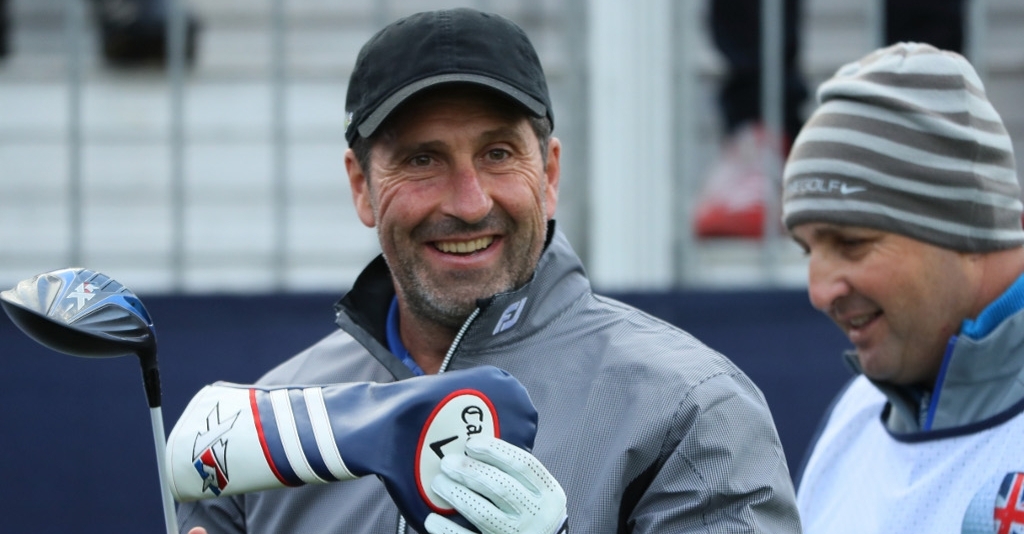 We’ve waited a long time, but not to worry – he’s back, and golf’s a much better place because of it.

After it had created a bit of a buzz all week, the first round of the British Masters supported by Sky Sports witnessed the return of a double-Masters champion of the 1990s, his first appearance on the course in 18 months.

Maybe it didn’t generate as much fuss as that concerning the non-comeback of a certain someone else this week, but seeing Jose Maria Olazabal back on the European Tour can only be a good thing.

At nine o’clock Thursday morning, from the tenth tee and wrapped in waterproofs and a woolly hat, Olly nodded his head. In response a healthy gallery slapped cold hands together and offered a few encouraging cheers.

He smiled briefly and then settled down to the familiar routine. A short practice swing, a longer, slower practice swing, finally a full practice swing. Then he setted over the ball. One look at the target, two looks, three looks, four. Pause. And then he pulled the trigger.

He found the fairway and the faithful fans had a little chuckle. They knew. Other than his fitness, it was his only long-term failing: he was imperious with the irons, imaginative around the greens, and, at his best, utterly sure with the putter – but he was always vulnerable from the tee.

“How old?” gasped another.

Curious logic but we knew what he meant. To many of us he will always be the teenager Seve took under his wing. The youngster who holed nerveless par putts after Seve gunned the birdie opportunity down the slope. The protege who frowned in concentration as Uncle Seve wrapped an arm around his shoulder and wagged his finger with encouragement. The snake-hipped 21-year-old who danced on the green when Europe claimed a first Ryder Cup victory on American soil in 1987.

In truth the hips now looked a bit stiff as he hit an approach to 35-feet. No matter, he rolled the putt in and was away with a birdie. A growl of “Get in there Olly” from the gallery, a coy wave of the hand from the Spaniard.

Great to see this guy back firing at pins again. #BritishMasters https://t.co/o8ruE8SeG0

“I would like my comeback to competition to be as discreet as possible,” he had said earlier this week and in comparison with the hoopla surrounding Tiger Woods he certainly got his wish, but about 150 of us pushed on through the back nine, happy to huddle under umbrellas as the early morning drizzle soaked The Grove’s fairways.

“I don’t think I’m the big news story,” he’d added. “In any case, I’ve been out of the European Tour for such a long time that I will need to introduce myself at the driving range. My opening line might need to be ‘Hello, I am José María, nice to meet you’.”

Good line, nice sentiment, but everyone who mattered knew exactly who the elder statesman was. If some couldn’t recall the glory days, they remembered his passionate Ryder Cup captaincy in 2012.

He missed a tiddler on the 11th to drop back to level, found the hazard with his approach at 12 on the way to another bogey. But at the par-three 13th his approach was like the good old days: tight swing, arrowed flight, the ball soared towards a flock of geese which flew in a V above the green, and landed like a butterfly. He dropped the birdie putt from 12 feet.

On we trooped, swapping anecdotes about his career and memories of his greatest achievements.

He was popular for this game, feted for his first Masters win in 1994 and admired for the way he fought back from crippling arthritis to claim a second Green Jacket in 1991, famously duelling with Greg Norman in the final round, their nods to one another after trading blows at the 13th green one of the great Augusta National moments.

But, after a failure to convert his birdie chance at the par-five 15th, his group paused on the 16th tee and it was time to reflect that with Olazabal there was more to our affection that what he achieved on the course.

On the road adjacent to the tee a prominent golfer sat in traffic whilst they hit. He revved his engine. Seconds later, when the way was clear, his progress could be traced across the property as he accelerated at high speed for spectacularly short stretches of road, all the while still revving like he was an 18-year-old in a souped-up Ford Fiesta Sport rather than a fellow competitor who ought not to be causing distractions.

It was the sort of idiotic behaviour that gives professional golfers a bad name.

In contrast, it was once said of Olazabal, by Mark McCormack, the man who more or less created the sports management industry: “Strange guy. Doesn’t seem interested at all in the money he could be making.”

And in 1997 Titleist sent Olazabal, who had been out all season with his arthritis woes, a large cheque. He returned it saying: “I have not played all season. I cannot accept your money when I have not earned it.”

Bringing the subject up with Olazabal tends to provoke a wince. He doesn’t really want to be compared with others, or held up to be a saint.

Instead he wants to return to competitive action.

“The problem is due to an inflammation of the extremities of the tendons,” he explained of his latest problems. “It’s been a long process of recovery. I’m feeling better but i’m still not at 100%.”

He eventually signed for a 2-over-par 73 which he described as “acceptable” so will need to go low tomorrow to make the weekend. But he’ll play again next week in the Portugal Masters.

It’s good to have him back.