Golf on the moon 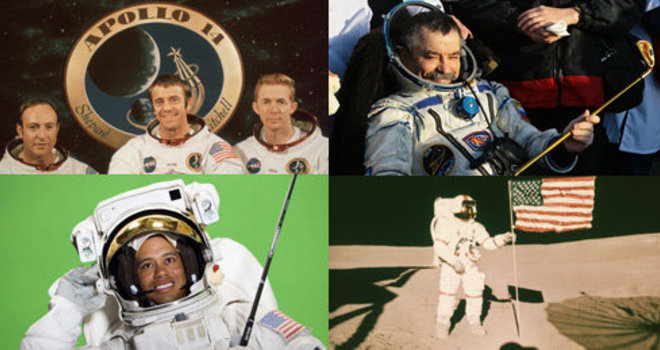 Each day, during Open Championship week, we celebrate the anniversary (July 20) of when man first set foot on the moon.

But if you’re a genuine golf nut, you might have more interest in the 1971 Apollo 14 moon landing than the one made famous by Neil Armstrong, Buzz Aldrin and Michael Collins two years earlier.

That’s because Apollo 14 was the mission where Alan Shepard smuggled a makeshift six-iron on board and lived out the fantasy of playing golf on the moon.

Jaws dropped back on earth when Shepard revealed: “Houston, you might recognize what I have in my hand as the handle for the contingency sample return; it just so happens to have a genuine six iron on the bottom of it. In my left hand, I have a little white pellet that’s familiar to millions of Americans. I’ll drop it down. Unfortunately, the suit is so stiff, I can’t do this with two hands, but I’m going to try a little sand-trap shot here.”

The clip can be seen on YouTube but before you launch the Shepard footage, check out Golf365’s special feature celebrating the links between golf and space.

In appropriate fashion we’ll count down from 10….

10. Two famous golfers – Sweden’s Jesper Parnevik and American Charles Howell – believe the moon landings were faked. “You look at the pictures and the flag is waving, but there’s no air on the moon,” says Parnevik, who gleaned his theory from the Ralph Rene book NASA Mooned America!Parnevik is well known for not being a conventional thinker. He once three-putted for double bogey whilst thinking about wrapping a piece of string around the equator, and is also famous for eating space dust. Parnevik is also behind Howell’s scepticism, having told the younger man that the moon landings took place on a soundstage in Nevada. Howell, therefore, tells a similar story. “Yeah, there’s a flag up there, but the flag is pointing out and there’s no wind to blow the flag. Think about that,” he told bemused journalists at the Sony Open in 2002. Bizarrely, there is a Charles Howell, who has been working at NASA Langley Research Center for 27 years. One of Howell’s fondest memories is seeing a man walk on the moon – the real one!

9. Patrick Moore – the UK’s best known star-gazer but also the name of a US Tour pro. The American Patrick Moore was voted Nationwide Player of the Year in 2002 after three wins. He hasn’t appeared on the US Tour since 2004 due to injury problems.

8. “Houston we have a problem” – not so for US Tour regular John Huston for most of his career as he racked up seven wins between 1990 and 2003. By scoring five of his victories in the same state as the Kennedy Space Centre and having a reputation for being the fastest playing pro on the planet the native Floridian could have been ideal sponsorship material for NASA but these days (no win since 2003) it does appear that Huston does indeed have a problem.

7. The fourth man to walk on the moon was A. Bean. While Alan was making history in space, another A. Bean (Andy) was coming through the junior golf ranks after moving to Florida in 1968 and honing his game on a course bought by his father. Andy, a hugely promising 16-year-old when the Apollo 11 mission took off not far from his home, went on to establish himself as one of the finest players of his era, winning three times in 1978 and going on to record 11 US Tour wins. Alan Bean, meanwhile, is now a respected artist with his own gallery. You can buy his sketch of Alan Shepard’s moon shot online.

6. Comedian Bob Hope, perhaps the most famous celebrity golfer of all-time, takes credit for the inspiration that produced Alan Shepard’s famous shot on the moon. In the chapter ‘Moon Shot’ in his 1985 book ‘Confessions Of A Hooker’, Hope reveals: “Alan got the idea from watching me, enduring a brief moment of crisis, holding a golf club in my hand. It happened in 1970, while I was doing a television show at NASA. Shepard showed me a training device used by the men who would soon be walking on the moon. It was a sort of harness for the upper torso, supported by a steel cable. The apparatus was necessary because of lunar gravity, meaning that on the moon you had only one sixth of your weight on earth. As I often do, I had carried my driver into the room where they were conducting the tests. They strapped me into the harness and involuntarily I went up on my toes and, feeling just a bit frightened, placed my driver down to act as a tripod. Shepard, watching closely, had a funny smile on his face. Later he told me that was where he got the idea to take a golf club with him to the moon.”

5. Five Bob Hope moon gags: 1) “Alan was unfamiliar with the course he was playing up there. He had to ask E.T. where the pin was. But I hear E.T. was a great caddie. Every time he went to test the wind, his finger lit up.” 2) “Shepard placed two balls in the dust. He shanked the second one – and tossed his club into the Sea of Tranquility.” 3) “Shepard started to return to the space ship, but something lying in the dust caught his eye. It was another golf ball, with Jerry Ford’s name on it.” 4) I enjoy playing golf with the astronauts. They’ve helped my scoring – teaching me to count backwards.” 5) (Referring to a crater to the left of Shepard) “That’s one big divot Al took.”

4. The same day Neil Armstrong became the first man to walk on the moon, Carol Mann won the LPGA Danbury Lady Carling Golf Open. But the link with space for the 6ft 3in World Golf Hall of Famer, who claimed 38 Tour wins, doesn’t end there. In 2006 she gave golf lessons to Russian Cosmonaut Mikhail Tyurin to help commemorate the 35th anniversary of Shepard’s famous shot. Appropriately, she once said of her life: “I’ve walked on the moon. I enjoy being a person, and getting old and dying are fine. I never think how people will remember Carol Mann. The mark I made is an intimate satisfaction.”

3. Tiger Woods re-created Shepard’s moon shot in a special commercial shown on US TV in 2008. The re-enactment was aired on CBS during a break in the NCAA Men’s Division I basketball tournament and was part of the advertising campaign to support the launch of the new Gatorade Tiger line. Talking of space, back in January 2006, Woods purchased a $39 million residential property in Jupiter Island, Florida. Other Jupiter residents include Woods’ fellow major winners Gary Player, Nick Price and Greg Norman. Check Tiger’s moon shot clip here – http://www.youtube.com/watch?v=WenTKxRxIAk

2. Mikhail Tyurin, not Alan Shepard, can lay claim to hitting the longest ever golf shot in history – a billion miles according to Canadian golf club maker Element 21 Golf who paid the Russian space agency an undisclosed sum for the stunt which saw cosmonaut Tyurin send a golf ball into orbit from the deck of the International Space Station (ISS). Tyurin stood on a ladder by the docking port and hit a light-weight ball using a gold-plated six-iron. It took him 16 minutes to set up the shot.

(just beating Sergio Garcia’ pre-shot routine circa 2001) and Element 21 claim the ball is still flying (they predicted three years from when he struck the shot in November 2006). NASA reckoned it would more probably fall into the Earth’s atmosphere and burn up within three days, thus making his shot closer to a million miles in length. Still not bad though, especially as he hit it one-handed. Although if you watch the YouTube clip I’m not convinced he actually made contact! http://www.youtube.com/watch?v=0dIPf5tDuLo1. It’s less well known, but another astronaut has played golf in space. Between tasks on the 1996 shuttle Endeavour mission STS-72, commander Brian Duffy was given a specially-designed “shuttle putter” by crew member Tim Terry, a fellow golf enthusiast, who designed the club and arranged for it to be smuggled on board. Using duct tape roll as a makeshift “hole”, Duffy made several attempts to sink putts but later told the U.S. Golf Association: “It’s much more difficult to putt in space than on Earth. Here (on the ground) there are only two dimensions to worry about. In space, you can also miss up or down.”

Longest? Maybe not. But surely the coolest shots ever hit, as we led off in the intro, were the ones struck by Alan Shepard on the moon in 1971. Shepard played golf with a Wilson six-iron head attached to a lunar sample scoop handle. Despite thick gloves and a stiff spacesuit which forced him to swing the club with one hand only, Shepard drove the last of his three balls, as he jokingly put it, “miles and miles and miles.” Recalling the famous incident, Shepard said in a 1991 interview: “All of us wanted to think of something which would demonstrate – especially to young people – the lack of atmosphere and the difference of the gravity. The gravity is only one sixth that of Earth and here is a total vacuum up there. Being a golfer, I thought if I could just get a club up there, and get it going through the ball at the same speed, that it would go six times as far as it would have gone here on earth. I designed a club head to fit on the handle we used for scooping up dust samples. I cleared it with the powers that be, and practiced in a space suit before we went to be sure there were no safety implications. The deal I made with the boss was that if things were messed up on the surface, I wouldn’t play with it, because we would be accused of being too frivolous. But, if things had gone well, which they did, then the last thing I was going to do, before climbing up the ladder to come home, was to whack these golf balls. Which I did. The balls are still up there. Perhaps the youngsters of today will go up and play golf with them some time, 25 or 30 years from now.” So how far did it travel? Shepard would later say when describing the shot in detail: “I wasn’t able to make a very big turn on the backswing, so the clubhead didn’t come through the ball with a lot of zip. But due to the conditions there, the ball ended up traveling 200 yards and probably had a flight time of 15 seconds.” Check out the Shepard footage here – http://www.youtube.com/watch?v=KZLl3XwlAIE