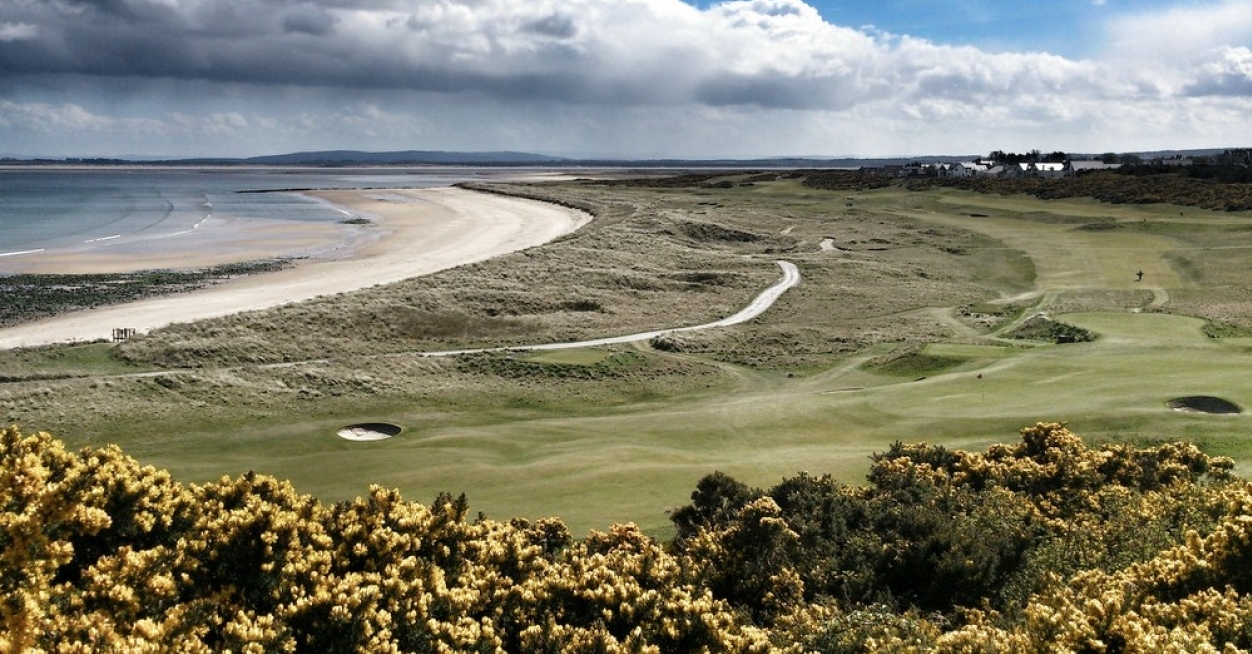 What’s the greatest finish The Open Championship has witnessed? That’s the question Glenmorangie are asking ahead of this year’s Championship and to celebrate the launch of a superb competition, Golf365 joined the whisky distiller on a tour of the Scottish Highlands.

First stop is the stunning Royal Dornoch GC, an hour north of Inverness and just 8 degrees south of the Arctic Circle.

It’s also in the top ten of just about every golfer’s must-play lists. Tom Watson described his first trip there as the most fun he had ever had playing golf. Decades earlier the great golf journalist Herbert Warren Wind wrote in the New Yorker: “Royal Dornoch is the most natural course in the world.”

And our party is not disappointed.

On a beautiful spring day the first eight holes are played downwind. Tee shots soar into clear blue sky, drop between the bright yellow gorse that lines the course and bound down the fairway.

Watson was right: this is fun.

The ninth tee is by the sea and turns 180 degrees into the 40mph wind, but the fun doesn’t stop. One playing partner is having to pick up his ball every other hole and he still plays with a big daft smile on his face. That’s how good the course is.

The 17th gives some respite: an inviting, downwind tee shot into a bowl-shaped fairway, prior to clipping your approach to a green set theatrically high above you, surrounded by more yellow gorse, swales and bunkers.

They celebrate 400 years of golf at Royal Dornoch this year and Glenmorangie have produced a limited edition whisky to celebrate the fact. There is no disguising that it takes a long time to get to Dornoch, but you feel like celebrating afterwards too. It’s a special place – and a special drop of whisky.

After the round we make our way to Glenmorangie House, a tranquil spot overlooking the sea, where we enjoy dinner, samples of whisky and discuss the Greatest Open finishes.

We peer at the shortlist of ten, arguing about those which made it and those that didn’t (Royal Lytham in 1988; Seve, Nick Price and Nick Faldo – how is it not there?!).

The debate goes long into the evening and we eventually settle on 1977 as our winner: The Duel in the Sun. Two indisputably great golfers went head-to-head over 36-holes, 18-holes, the back nine, the final hole, the final green – whichever way you look at it Nicklaus vs. Watson had it all. It was a long-burner, but it also had fireworks at the end. A glorious battle concluded in style.

Next morning we head to the Glenmorangie distillery and discover how the great finish to their whisky is created. Two men might have made our Greatest Open finish, bit it turns out that 16 men of Tain are responsible for Glenmorangie.

In tasting I discover a recent visit to Porto has left me with a fondness for Glenmorangie’s Quinta Ruban, the darkest and most intense of the extra-matured range, aged 12 years in a port cask. The Duel in the Sun of my tasting experience.

Last stop is the venue for this year’s Scottish Open, Castle Stuart, which hosted it three times from 2011.

Again the wind is gusting at 40mph and the this time the opening holes are played right into the teeth of it, with the stunning Moray Firth to our right. Even the slightest amount of cut spin sends long shots soaring away onto the beach.

On the fourth hole we get some respite, turning towards the Castle itself. With the wind behind we can hear one another speak for the first time in 40 minutes and despite our games having been ravaged we’re gushing about the course again.

The views are simply stunning, first down the by the sea, then high above. The fairways sweep and roll across the land as if they’ve been there for hundreds of years rather than a couple of decades.

The over-riding feeling is that this course is majestic in real life and that television doesn’t do it justice. For the second time in two days we are wind-beaten but ecstatic.

Appropriately we tick off four pars on the final hole – our own version of The Greatest Finish.

Glenmorangie, The Spirit of The Open, asked leading golf experts and commentators to narrow the field down to ten and now the final choice of the Open Championship’s Greatest Finish is up to the public.

The winner will be announced during the Championship itself but between now and then you can watch archive footage and then place your vote.

To see the videos and add your vote click here.

1970, St Andrews – Jack Nicklaus defeats Doug Sanders by a single stroke after an 18-hole play off.

1972, Muirfield – Lee Trevino overcomes Tony Jacklin after chipping in on the penultimate hole.

1977, Turnberry – Tom Watson edges Jack Nicklaus in the ‘Duel in the Sun’.

1995, St. Andrews – Constantino Rocca fluffs his chip then holes an outrageous putt to force a play-off with John Daly.

2013, Muirfield – Phil Mickelson charges through the field with four fantastic birdies in the final six holes.