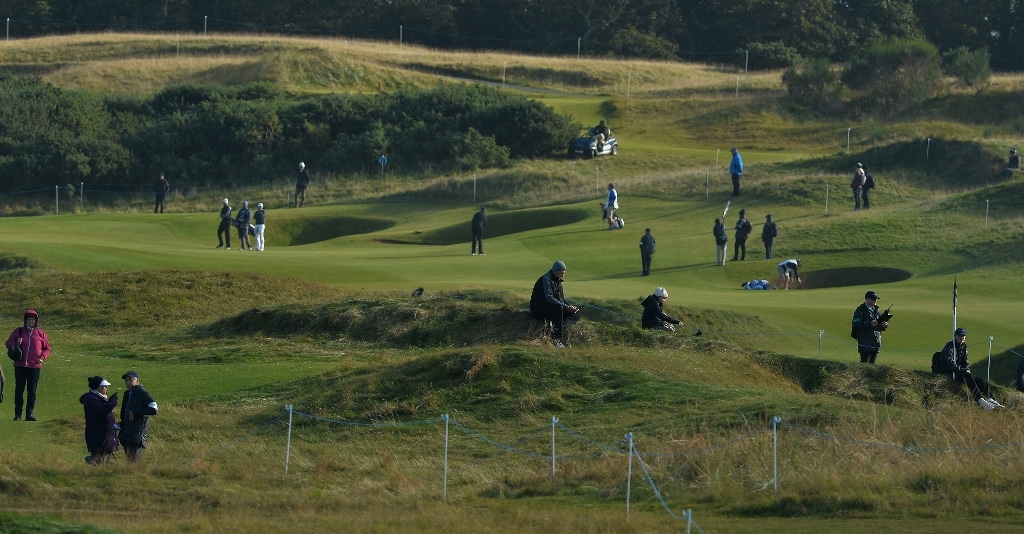 Matt Cooper is in Scotland this week, giving us a taste of the unique atmosphere of the Alfred Dunhill Links Championship.

England’s Tyrrell Hatton heads into the final round of this year’s Championship holding a three-shot advantage over the field and given the distinct nature of this week’s challenge – links golf – it might be no surprise he is in such a strong position.

Earlier this year he finished second in the Scottish Open at Castle Stuart and fifth a week later at Royal Troon in the Open Championship. No-one in this week’s field finished ahead of him in either of those events.

But his form on linksland goes further back in the record books. Last year he was fourth in the Irish Open at Royal County Down, a quarter finalist in the Paul Lawrie Match Play at Murcar Links and 22nd in the Scottish Open at Gullane.

The previous season – his rookie year on tour – he was fourth in the Scottish Open at Royal Aberdeen and 11th in the KLM Open at Kennemer.

The only surprise in all of this is that prior to his Open top five this year he had missed the cut four times in that event. Coincidentally he has a similar record in this event: he’s missed the cut on both visits so far – can he complete the deal tomorrow and claim a first European Tour victory?

If he does it will continue his trend of links success, but buck a trend of his own on the Old Course because he admitted after firing a course-record-equalling 62 in the third round that: “It’s not a course that has been kind to me. I played the Links Trophy as an amateur, and I played the Open in 2010. Fair to say I struggled. Hopefully I can get another good one tomorrow.”

These replica balls at the @britgolfmuseum are very good. The feathery reminds me of hackysacks. pic.twitter.com/eAzV8ql8Kg

Before the golfers attempt to close the show with metaphorical fireworks on Sunday afternoon, the St Andrews night will be lit up by a genuine, and spectacular, fireworks show.

They will explode over the R&A clubhouse before everyone heads back to the pub or the gala dinner that Dunhill host for golfers and guests.

It’s one of the highlights of a great week in the old grey town.

If you’re coming to the last round of the Dunhill tomorrow you’d be a fool not to take advantage of this. @EdenMill pic.twitter.com/7wShsrq9xP

If there were such a thing as a Scottish Swing, and it had a mini-ranking, the Swede Alex Noren would be romping to victory. So far this season he has won the Scottish Open, finished second in the Paul Lawrie Match Play and was T46 in the Open at Royal Troon.

This week he has rekindled the Scottish flame with a course record-equalling round of 8-under-par 64 at Carnoustie and a 1-under-par 71 at Kingsbarns, which has him alone in third heading into the weekend, two shots off Ross Fisher’s lead.

It’s been a rollercoaster 18 months for the 34-year-old. Last June he won the Nordea Masters and seemed set to make a bid for the European Ryder Cup team, but injury caused him to miss the cut in his next start at the US Open and forced him out of the game until November. From that re-entry at the Turkish Airlines Open through the end of this year’s Desert Swing he played seven times, made the cut on each occasion, but never posted a top 30 finish.

Then his daughter Olivia was born, he took some time off and was soon making headway. It started with top tens in Spain and China before really bursting into life in July, culminating in the Scottish success and he has since added the European Masters title.

After completing his round at Kingsbarns he revealed the birth and his upturn in form are not unrelated.

“Since we had our baby I’ve looked at golf a little less seriously than before,” he said. “It’s helped. I mean, I made a double bogey today and it doesn’t hurt as much as it did perhaps a year ago. I think that’s the biggest change for me and I don’t dwell on those things every night.”

He also explained how he has come to terms with the Kingsbarns test. “I love it. It grows on me every time. I like the challenge of how big it is, but you still have to hit good shots. The first few times I was there I thought it was crazy. I couldn’t focus.”

The Swede eagles the par four 6th after holing out from 78 yards with a lob wedge. pic.twitter.com/hgNany8gcn

There is a genuine difference between Dunhill Week in St Andrews and Open Week. During the latter the town is heaving, the course notorious for tough viewing and the pubs are packed.

This week fans have a great time. The pubs are relaxed, the town is buzzing with students, there are free buses to the other courses, no parking fees, a free daily newspaper, no charge to watch on the first three days and easy access to the players. It’s amazing more people don’t take advantage.

As I gently mock the Championship on Twitter I get a few responses which re-iterate how some people hate the event’s amateur and celebrity aspect. They seem to think I’m with them, whereas in actual fact I’m not angry about it; instead I’m entertained.

Indeed one of my favourite rituals of the week is reading the amateur biographies, a weird and wonderful golfing version of Debrett’s.

There’s Jan Bengtsson, a found of H&M and 11 time competitor whose highlight was making the cut nine years ago (blimey, he’s due a good week). Or philanthropist and investor Geoff Beattie, who last year played his partner Jamie Donaldson’s ball and then watched Donaldson play his. “It was a complete train wreck,” said Beattie.

I like Tony Bird’s claim to fame: his grandfather invented the custard. And I wince that William Getty, grandson of J Paul Getty, says his “most unforgettable Alfred Dunhill golfing moment was playing with one-legged Manuel de los Santos in a strong gale”.

However nothing beats the Accidental Partridge nature of the admission by Jamie Grant, “New York-based banker and brother of film star Hugh”, who says “he likes to talk incessantly on the golf course, particularly when paired with Hugh, who prefers to play in complete silence.”

The National Gallery of Scotland has halls which celebrate all manner of art, from Rococo to Renaissance, Gothic to Baroque, portraits and landscapes, impressionism and realist. There’s no bad golf art collection however.

Not to worry – St Andrews more than makes up for it.

Ever wondered what an old and frail Phil Mickelson would look like? Wonder no more. pic.twitter.com/mXYOlBNyYz

Want proof that this week is different? I spent my lunchtime drinking gin with a burlesque dancer called Brandy Montmartre and it was connected to golf. True story and somehow typical of this week.

I was at the Eden Mill brewery-distillery, a few miles outside of St Andrews in Guardsbridge, for a tasting tour of their gin range, taking in their unique Golf Gin.

In addition to the key botanicals of any gin (juniper berries and coriander) it includes Angelica, heather flower and red clover, flavours inspired by Royal Troon since the gin was created especially for the Open Championship.

But there is one other secret, and very golfing, ingredient – hickory. Pieces of the woods were smashed up and then used to infuse the spirit.

The result is superb, as are the other gins Eden Mill produce, from the crisp, dry original to their best-seller, the pink and floral Love Gin.

Tours of the Mill are highly recommended, a real eye opener to the creation and production process, with plenty of samples. If you’re attending the final day of the Championship head to the One Under Gastro Pub, alongside the 18th green, where you’ll be welcomed with a G&T and can catch a sell-out Edinburgh Fringe show by the Queen of Gin Kate O’Neill.

And Brandy? She had nothing to do with golf. Just a wonderfully bizarre detail.

St Andrews just got even better. Waiting for a tasting tour of @EdenMill distillery with a crisp G&T. @moonandfugg, you would love it here. pic.twitter.com/SuFRBvnolB

Dunhill week is only partly about the golf. The real star is the town of St Andrews.

That means the harbour and the two beaches, the castle and the cathedral, the bars and the pubs, the sea and the sky, the locals and the visitors.

A good number of the latter are Americans, many of them golf nuts who wander round in a daze, buying anything golf-related. Plenty more are students at the university and no visit to the town is complete without sitting in a cafe eavesdropping on their extraordinary conversations.

There is a conviction to these earnest young people that is startling. Such force and intensity. They’ve been born, tutored and hothoused for academia (and greater things will presumably come). They’ve attended great educational establishments to get here, every trace of their upbringing is clear and unequivocal. Their self-confidence is remarkable, their eyes are almost permanently wide with determined focus. You watch them and think they must be debating the great issues of the past, the present and the future.

Then you catch what they saying.

Turns out the big question was: flapjack or cup cake?

Went for a run along the coast from St Andrews to the Castle course this morning. Stunning views (Not my photo, forgot phone) @TheHomeofGolf pic.twitter.com/AJozOSjpnH

St Andrews is a famously slow golf course for professionals to negotiate.

Put them in a fourball with two amateurs and the pace becomes glacial. Even on a good day golf is a frankly weird sport to watch live, on a Dunhill day it becomes utterly surreal.

It’s one thing to watch famous people play crap golf, quite another to watch rich people you’ve never heard of doing it. It’s testament to the town, the atmosphere created by the sponsors and the views that you’re not left thinking it’s the definition of feeling like your life had gone a bit wrong.

And there is a certain fun to be had watching international sportsmen shank balls into the garden of the Jigger Inn or musicians slice tee shots onto the main road.

My favourite was watching Johan Cruyff, the Dutch superstar footballer who sadly passed away earlier this year, attempt to hit the 13th green with his approach shot a few years ago.

It was a head-high near-shank that flew like a bullet at about 30 of us who, in perfect harmony, executed hasty Cruyff turns to avoid injury.