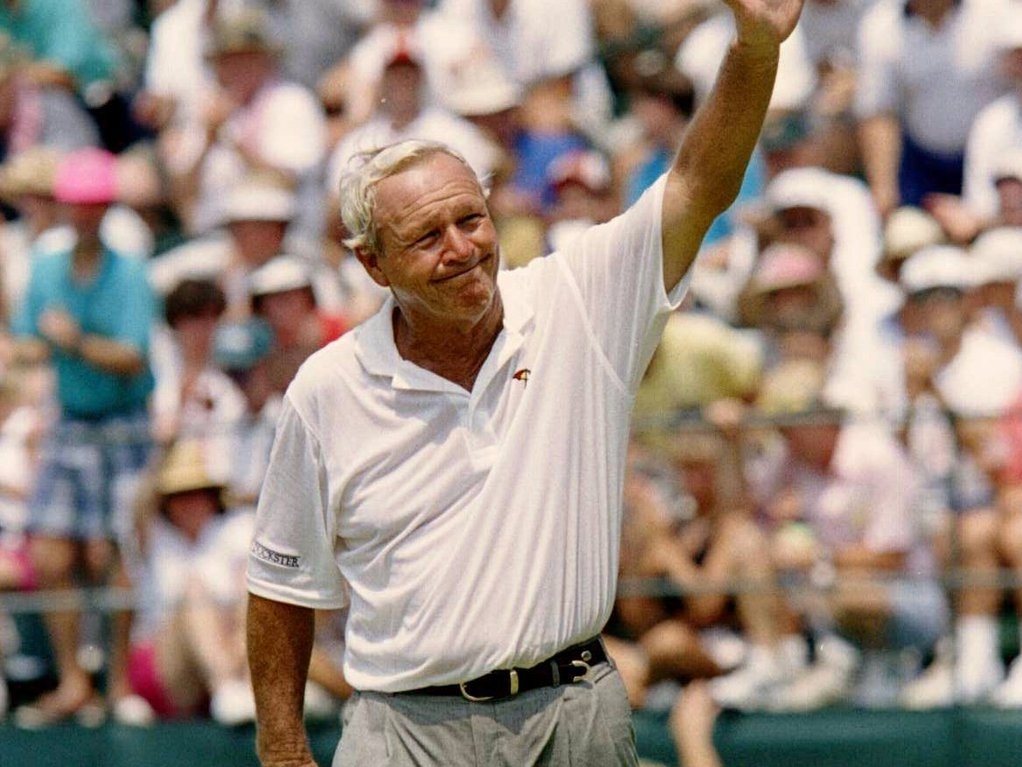 It's impossible to overstate what Arnold Palmer, who died yesterday at the age of 87, did for the game of golf. He didn't just win tournaments and major championships, he won the hearts of golf fans.

He was adored by his Army in America and loved this side of the Atlantic for revitalising the Open Championship.

His arrival on the scene had coincided with the introduction of colour television and broadcasters suspected golf could be a good match with new technology.

It might have happened without him, but Palmer's personality ensured that it worked. His charisma was as immediately obvious through the lens as without it, his daring approach thrilled viewers as it did galleries, his Army provided noise and more colour, whilst his rivalry with Jack Nicklaus created drama.

Meanwhile his business relationship with Mark MacCormack ensured that Palmer was rewarded, as no golfer had been before, for transforming the game across the world.

Throughout it all he took no backward step on the golf course, whilst frequently doing the opposite off it, making efforts with friends and strangers alike.

In his book 'The Bogey Man' George Plimpton tells a brilliant story about The King.

A friend of Plimpton's was attending a tournament during the 1960s and needed the Port-O-Let (Portaloo), which stood like a sentry box down one of the fairways.

On entering there had been very few people about, but when he opened the door (“which made a shrill squeal”) the scene was rather different.

“Now, with himself and the Port-O-Let at it's apex, an enormous fan of people had materialized that stretched away towards the distance green, a double line of faces – thousands, it appeared – all straining to see.

“And there, not ten yards away, standing over a golf ball that he had nearly hit out of bounds, and getting ready to to swing, was Arnold Palmer.

“At the creak of the hinges Palmer looked back, and he saw my friend standing at the door of the Port-O-Let.”

How did you react? wondered Plimpton.

“I stepped right back inside and pulled the door shut. All those people. It was like slipping through a door and finding oneself alone on the stage of a fully occupied opera house. What happens is that your eyes pop and you back right through the door you came out of. I really slammed that door.”

Plimpton was understanding, but wanted to know what happened next.

“Well, after a second or two, there was this knock on the door and it was Palmer. 'Listen,' I heard him say, 'come on out, there's no hurry.'

“Well, I thought about that great mob of people out there, all looking and maybe getting ready to laugh. So I said through the door, 'No. You go right ahead Mr Palmer. I'm in no hurry either. I don't want to disturb you.'”

It didn't get any better.

“Well, I heard his footsteps in the grass, moving away, and the increasing quiet of the crowd, which had been murmuring, and I knew he was standing over his ball and they were settling down for the shot.

“But the murmur started up again, and I was surprised, because I hadn't heard the click of his club going through the shot.

“Then I heard footsteps and there was this knock at the door. 'Listen,' he said. He sounded very apologetic through the door. 'I find it's hard to concentrate on my shot thinking about you shut up in that box. I'd appreciate it if you would come out.'

“Well, of course I did. I pushed the door open with that big screech, those damn rusty hinges, and I stepped out. It was very bright in the sunlight after the Port-O-Let, and there was Palmer looking worried and serious, and he said he was sorry to have inconvenienced me.

“I said, 'Oh no, not at all.' There was quite a lot of laughter, and I sidled off and tried to get lost in the crowd.”

Here are more words that reveal why Arnold Palmer was so loved.

“I used to hear cheers go up from the crowd around Palmer and I never knew whether he’d made a birdie or just hitched up his pants.” – Lee Trevino

“Like Sir Lancelot amid the multitude in Camelot.” – Ira Berkow in the New York Times on his relationship with his fans

"Arnold fell out of bed with charisma. He just had it." – Gary Player

"Arnold Palmer didn’t just leave an indelible mark on the game he graced but on everyone he met. He was that kind of man. If he saw a stranger dining alone in the restaurant at his Bay Hill golf club he would ask if he could join them." – Derek Lawrenson in The Daily Mail

"The most rewarding things you do in life are often the ones that look like they cannot be done."

“Concentration comes out of a combination of confidence and hunger."

“You can make mistakes when you’re being conservative, so why not go for the hole?”

“Putting is a fascinating, aggravating, wonderful, terrible and almost incomprehensible part of the game of golf.”

RIP Arnold Palmer. Legend. Icon. Hero. The reason that the game we love is played and enjoyed by so many. #arniesarmy #RIPArnie #theking pic.twitter.com/YdM3vSq9eT