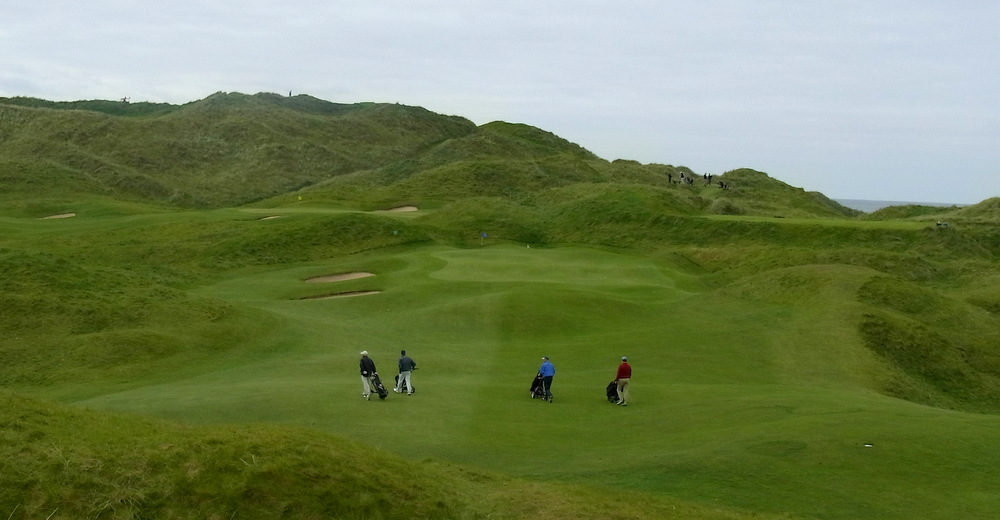 Matt Cooper went to Ireland expecting to have a good time – and he came back enchanted by its golf and its people.

Friday:
The weekend begins with a trip to Killeen Castle GC near Dublin, the venue for next year’s Solheim Cup. Having required a 2 a.m. alarm call I wake myself up with a bracing (it is a clear but cold day) buggy ride round the excellent Jack Nicklaus layout and then interview the former world number one and European vice-captain Annika Sorenstam. As I wait for Annika I’m approached by a local girl. “Are you Matt Cooper?” she asks. “Yes.” “The real Matt Cooper?” she continues. “I think so.” “But you’re English,” she concludes and I can’t argue with that. “I thought you were the other Matt Cooper,” she says, disappointed. “You know … the famous one.” As it happens, I do know: the other Matt Cooper is an Irish DJ and journalist and it’s not the first time I’ve been mistaken for him. Nor, if I’m honest, is it likely to have been the first time that I’ve left an Irish girl disappointed.
Leaving Dublin I head west for Galway where a weekend of golf and the International Oyster Festival awaits. I fall asleep and when I wake the plane is shaking from side to side and my face, pushed against the window, is greeted by the frightening sight of the earth less than 20 feet away. I reel in horror and emit a high-pitched squeal: we’re clearly all about to die, crashing into a field of sheep. Random episodes from my life flash before me and then I remember that I got off the plane eight hours earlier and am currently on a train which has every right to be hurtling through a field. I grin nervously at the startled faces of my fellow passengers.
At Galway station it takes less than half a second to appreciate that I’ve arrived somewhere special. The buzz is more like a major sporting occasion than a weekend to mark the seasonal haul of fresh produce. I wander towards the Latin Quarter, pushing my way through crowds of excited festival-goers, find something to eat, down the first Guinness of the weekend and then take a minicab to my hotel. The driver is a gentle old soul who drives slower than I could have walked. He asks me only the simplest of questions but somehow prompts me to tell my recent life story and then offers some sage, if a little eccentric, advice. We bid farewell like the oldest of friends. Extraordinary, but also very Irish.
The friendly welcome continues in the lobby of the Glenlo Abbey Hotel where Marie and Louise on reception laugh at all my inane jokes, give me a full tour and then settle me in the lounge, with a pot of tea and my laptop fired up to file my Annika Sorenstam interview. I notice that Hilary Clinton stayed at the Glenlo Abbey in 1999 which is an odd coincidence because the previous weekend, whilst at the Spanish Open, I stayed at the Villa Padierna in Marbella, a recent holiday destination for Michele Obama. Marie and Louise suggest that, for my own safety, I stop stalking First Ladies.
Saturday:
After introductions at the breakfast table (my golfing companions for the next two days are Shaun, the editor of Golf Punk, and Peter, News of the World photographer; the three of us kept in check by expert planner Daisy) we knock the rust off our swings on the nine-hole course at Glenlo Abbey, a good idea given that the main golfing test awaits us at Lahinch tomorrow. It is one of the finest courses in the world, never mind Ireland and we’re more than a little excited about taking it on.
At noon we return to the carnival atmosphere of Galway. We catch the bands, street performers and pageantry of the parade that marks the Official Opening of the 56th
Galway International Oyster Festival. Our destination is the Festival Centre at the Radisson Blu Hotel, but the week’s festivities aren’t limited to one venue: there is free live music at over 30 venues across the city, whilst on Saturday afternoon 40 bars and hotels, courtesy of Diageo, offer free oysters. That kind of explains why the Sunday Times called it, “one of the 12 greatest shows on earth.”