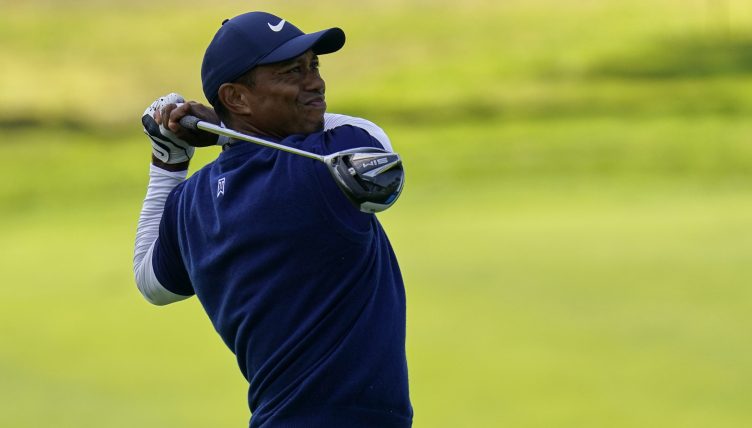 Tiger Woods finished with a flourish but was unable to rescue his chances of claiming a fifth US PGA Championship victory in San Francisco.

Woods made the cut with a shot to spare after a disappointing second round of 72, although all 79 players who qualified for the last 36 holes were separated by just nine shots.

That meant the 15-time major winner had characteristically not given up hope of adding to his tally at Harding Park, where he won the WGC-American Express Championship in 2005 and compiled a perfect 5-0 record in the 2009 Presidents Cup.

However, Woods could only card a third round of 72 made more respectable by birdies on the 16th and 18th after he had threatened to compile his first round without a birdie in a major since an opening 74 in the 2010 US Open.

Woods got off to a sluggish start with seven straight pars before three-putting the eighth from 30 feet and the 44-year-old also bogeyed the 11th, 12th and 13th before finally making his first birdie of the day from 15 feet on 16.

A superb approach to the 18th set up another birdie from close range, but Woods still signed for a second consecutive 72 to finish two over par.

The early clubhouse target had been set at three under par by England’s Ian Poulter and American Patrick Cantlay, who both shot 66 and then sat back to see if a strengthening wind would make life difficult for the leaders.

World number one Justin Thomas had earlier threatened to do better than that in pursuit of a second US PGA title, the 2017 winner covering his first seven holes in five under par.

A bogey on the eighth halted Thomas’ charge and another on the ninth dropped him back to two under, although the 27-year-old stopped the rot with a birdie on the par-five 10th.

Thomas was understandably annoyed to finish with dropped shots on the 16th and 18th to complete a 68, although that was eight shots better than playing partner and close friend Jordan Spieth, who needs to win the US PGA to complete a career grand slam.

“That was really disappointing to finish the way I did today,” Thomas said. “I felt like, being five under through seven, I could have shot 62 or 63 and just posted and watched those guys play.

“It’s a bummer I’ve potentially cost myself a chance to win this thing but who
knows what will happen today?

“I mean, I’m p***** off, that’s really the best way to describe it. I let a really good round go, and really had a great opportunity to put myself in a good position going into tomorrow. I just didn’t capitalise on the back nine.”

Two-time US PGA winner Rory McIlroy, who played alongside Woods and Thomas for the first two days, was two under par after 11 holes and three under overall to close within five shots of the lead held by China’s Li Haotong.

Li held a two-shot advantage over a six-strong group which included defending champion Brooks Koepka and the English pair of Tommy Fleetwood and Justin Rose.

The final pair of Li and Fleetwood were due to begin their third round at 1500 local time (2300BST).