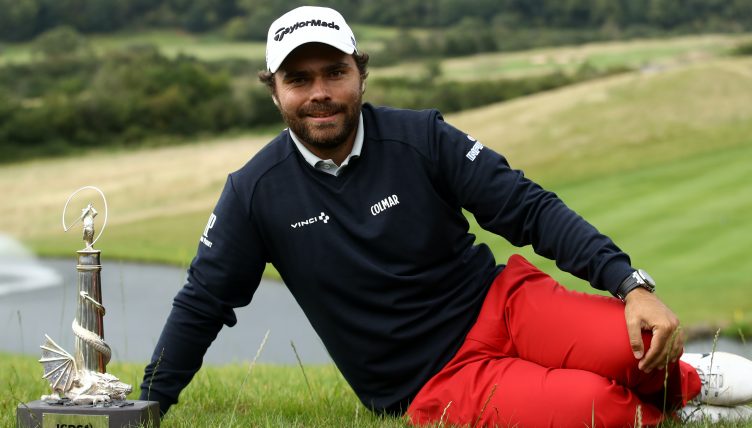 France’s Romain Langasque overturned a five-shot deficit to win his first European Tour title and secure a US Open debut at the ISPS Handa Wales Open.

Langasque carded six birdies in a flawless closing 65 at Celtic Manor to finish eight under par and two shots ahead of Finland’s Sami Valimaki, with England’s David Dixon and Matthew Jordan a shot further back.

Sweden’s Sebastian Soderberg needed to birdie the 18th to force a play-off, but fell back into a tie for fifth after spinning his third shot back into the water to run up a triple-bogey eight.

Scotland’s Connor Syme, who shared the overnight lead with Soderberg, also found the water on the last to double bogey and slip into a tie for eighth.

Langasque told Sky Sports: “I was playing really good since the start of the week and was only focusing on my own thing, and I’m so happy the way I played the back nine.

“I had so many birdie opportunities and the second shot on 16 and the tee shot on 17 were my two best shots of the week.

“It’s one of the first times I didn’t really feel the pressure because I was really focused on every shot and the first I felt pressure was the wedge to 18 because I was looking to have a longer shot.

“It was not easy because I was too close and the two-putt was under pressure but before that I was really cool.”

The victory will take Langasque inside the world’s top 100 for the first time and also secured a US Open debut next month via the mini order of merit from the first five events on the European Tour’s UK Swing.

“In golf everything can go so quickly,” the 25-year-old added. “I’m really, really happy, this is where we all want to be and now I will have some good opportunities and need to focus again and play my best golf.

“Playing my first US Open this year, the good thing is with no public there’s less pressure on it being my first one. I’m really proud of myself.”

Valimaki held the outright lead after an eagle on the ninth and again after a birdie on the 11th, but bogeyed the 12th and could not find any more birdies down the closing stretch.

“It was a good day, I just couldn’t find those birdies on the back nine and that let me down for the win, but obviously a really good week,” Valimaki, who won the Oman Open in March, said.

“It is a big bonus for sure to make it into the US Open. It’s awesome, I’ve been waiting such a long time to get into majors and now is the time. I’m going to go there and try win the tournament, like I do at every tournament.”