Morikawa on ‘cloud nine’ after US PGA Championship victory 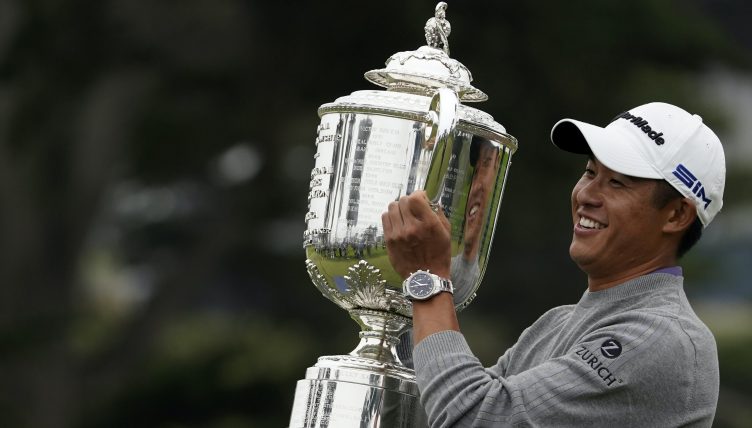 American Collin Morikawa admitted he was on “cloud nine” after winning a thrilling US PGA Championship in sensational fashion in just his second appearance in a major.

Morikawa emerged from a seven-way tie for the lead in the closing stages at
Harding Park by chipping in for a birdie on the 14th hole and then producing a
stunning eagle on the 16th, driving the green on the 294-yard par four and
holing from seven feet.

The 23-year-old carded a closing 64 – equalling the lowest round of the week –
to finish 13 under par and two shots ahead of overnight leader Dustin Johnson
and England’s Paul Casey, who barely put a foot wrong in pursuit of his first
major title at the 64th attempt.

Casey carded five birdies and a solitary bogey in a final round of 66 to record
his best finish in a major, with Matthew Wolff, Jason Day, Bryson DeChambeau,
Tony Finau and Scottie Scheffler all sharing fourth place on 10 under.

Morikawa was flawless on the course but his trophy handling needs a little practice.

“If he’s trying to play mind games, he’s trying to do it to the wrong person” – Rory McIlroy feels Brooks Koepka’s is wasting his time trying to get into Dustin Johnson’s head about the latter’s relative lack of major titles.

Having just been caught by Casey’s birdie on the 16th, Morikawa went one better with a stunning eagle from seven feet on the 294-yard par four.

Morikawa had to work hard to par the first two holes but was almost flawless after that with four birdies and an eagle.

Anyone looking for next year’s winner of the US PGA should perhaps focus on the young guns.

Collin Morikawa, whose brilliant victory lifted him to fifth in the world rankings after little over a year as a professional.

Rory McIlroy’s respect for Brooks Koepka after the latter took a shot at Dustin Johnson’s relative lack of major success following the third round.