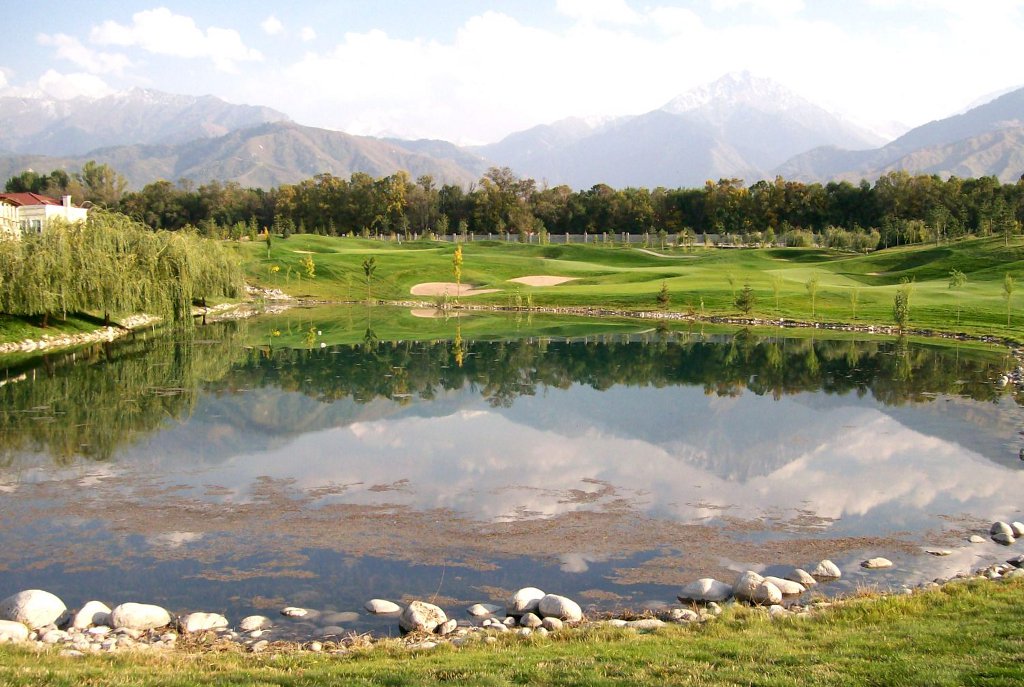 As the Challenge Tour makes its annual journey east to the Kazakhstan Open, Matt Cooper looks back at his diary of the week he joined the field in Almaty.

Every mention of this trip in the last month has prompted the response “Borat” but there is nothing here to remind you of the Sacha Baron Cohen creation. Instead everything this side of the Kazakh Steppe is suggestive of “Tinker, Tailor, Soldier, Spy” and I can barely contain my excitement.

There are rumours that the official hotel was once a KGB sanatorium, a presidential motorcade ushered the shuttle bus through the city of Almaty, the hazy light is like an Instagram 1970s filter, there are monuments to the Soviet Union everywhere, and the national palette favours brown in all shades from light beige to dark chocolate.

When I’m not considering safe locations for dead letter drops I ponder how golf in the country has grown in no time at all. From President Nursultan Nazarbayev attending a business meeting on a golf course in Japan to, just a few years later, the Kazakhstan Open becoming a key event on the Challenge Tour schedule, almost like a major for the circuit, a high profile event with a big prize fund, success in it almost guaranteeing graduation to the European Tour.

A day following the European Tour Production team around the city of Almaty, getting golfers to swing clubs in front of tourist attractions. Both monuments and local children are somewhat sceptical of what they see. 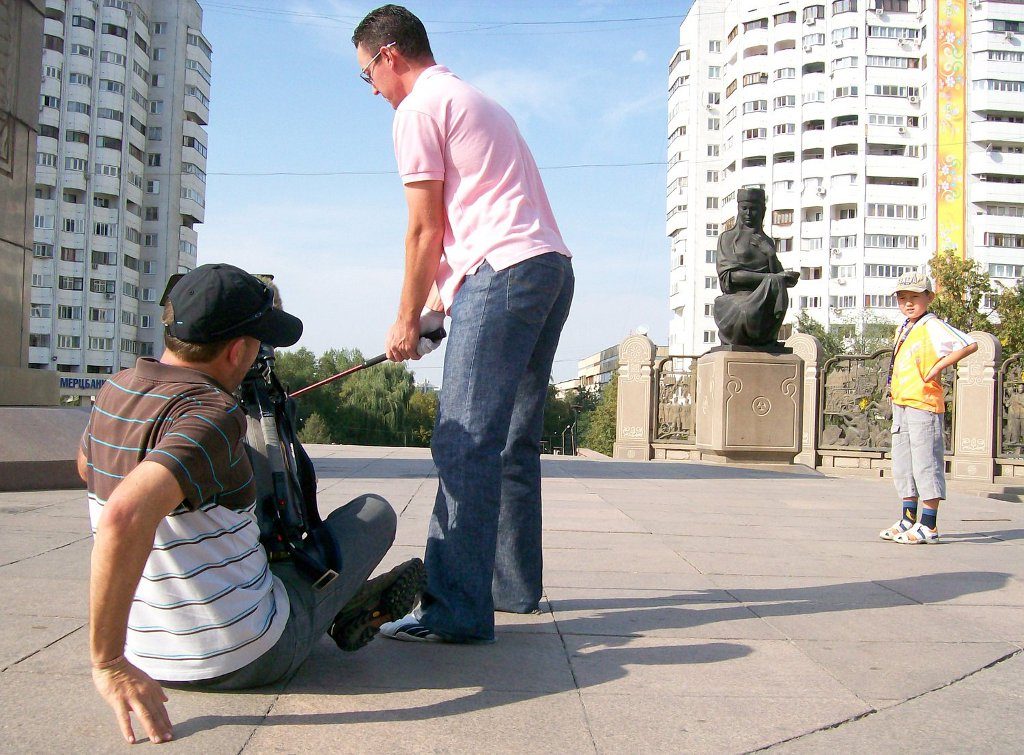 I end the evening in the hotel bar (The Guns N Roses), chatting to locals who insist on pouring brandy down my throat. Literally. I open my mouth, they stand on a chair and they pour it in from the bottle, insisting it is a national welcome. I have a very distinct memory of where I was when it happened, what the two men looked like, exactly where the bottle came from behind the bar, how they tipped my head backwards, and how they laughed. Nothing after that. Absolutely nothing.

‘So, Matt,’ my playing partner says. ‘You need to pull out a really great shot here. We need a birdie to maintain our challenge for the title.’

‘You have exactly 202 metres to the front of the green. It is slightly uphill, about five metres is my guess. There is no wind, but there is a deep bunker front left. What’s the play?’

‘I think you can hit a draw. Aim right of the green and maybe you can use the contours to run the ball close. It’s set up for you. That’s the play.’

I look at my playing partner. It might have been Scottish pro Andrew McArthur saying these words or perhaps fellow journalist Ruben Van Der Zaag, both in my fourball. If it had, they would have been said in jest.

The person actually saying them, however, is deadly serious. He’s also a ten-year-old boy from Kazakhstan.

‘Concentrate, Matt. Let’s do this thing.’

He is really saying these things. It is extraordinary. Literally extra-ordinary. This precocious and curiously charming little boy is bombarding me with a strange English patter he’s picked up from Disney movies, Playstation and Tiger Woods press conferences.

Under his quietly demanding gaze I unleash my three-wood. The ball starts right of the green, draws back towards the target, takes the contours of the fairway and comes to rest just short of the putting surface presenting us with an excellent chance of making the birdie he so desperately wants.

I pass the three-wood to Dana, a painfully shy student caddie. She speaks no English but is, I think, complicit in my awe of Daulet. We share grins. Then we hear a cry.

We high-five and walk towards the green like two Ryder Cup stars feeling pleased with themselves. We’re joined by Ruben.

‘So Ruben,’ Daulet asks. ‘Do you know how many allergies I have?’

One by one he counts the various ailments on his fingers. We nod in stunned silence. That done Daulet begins to sing, without any sign of self-consciousness, ‘What a Wonderful World’.

‘You know, Matt,’ he says upon finishing. ‘The man who wrote that song was a cynic because he didn’t really believe it was a wonderful world. What do you think of that?’
‘I don’t know, Daulet,’ I say. ‘I really don’t know what to make of it. Any of it …’

This is because the day had started, is continuing and will finish in about as surreal a fashion as I could ever have imagined.

Unsurprisingly I had woken with a titanic hangover and on our fifth hole I had to be ill in the trees. Upon reaching the green Daulet’s mother took me to one side. She was a lovely lady who had introduced herself at the start of our round, taking great care to welcome us to her country.

‘I am so very sorry,’ she said to me now. ‘The food in Kazakhstan is not very good.’

I looked her in the eye and saw a kind woman offering a stranger some words of comfort. She looked genuinely upset that her nation had failed a visitor. I thought about the brandy and concluded that, in a way, she was right.

She opened her handbag and rifled through the contents. ‘American pills,’ she said, brandishing a packet. ‘They are very good! I buy lots when I go to America! They will cure you of Kazakhstan food.’

Hours later Andrew birdies the final hole and Daulet announces that we are the winners, something the rest of us doubt, but when we’re urged to attend the presentation ceremony we sense something is going on, not least because it’s so unlike any pro-am presentation we’ve seen before.

Normally they resemble garden fetes or corporate dinners. What you don’t see are three TV cameramen and ten photographers fighting for the best angle.

We’ve won and Daulet takes the microphone to deliver two speeches, one in Russian and another in English, to a gallery who cheer his every word. 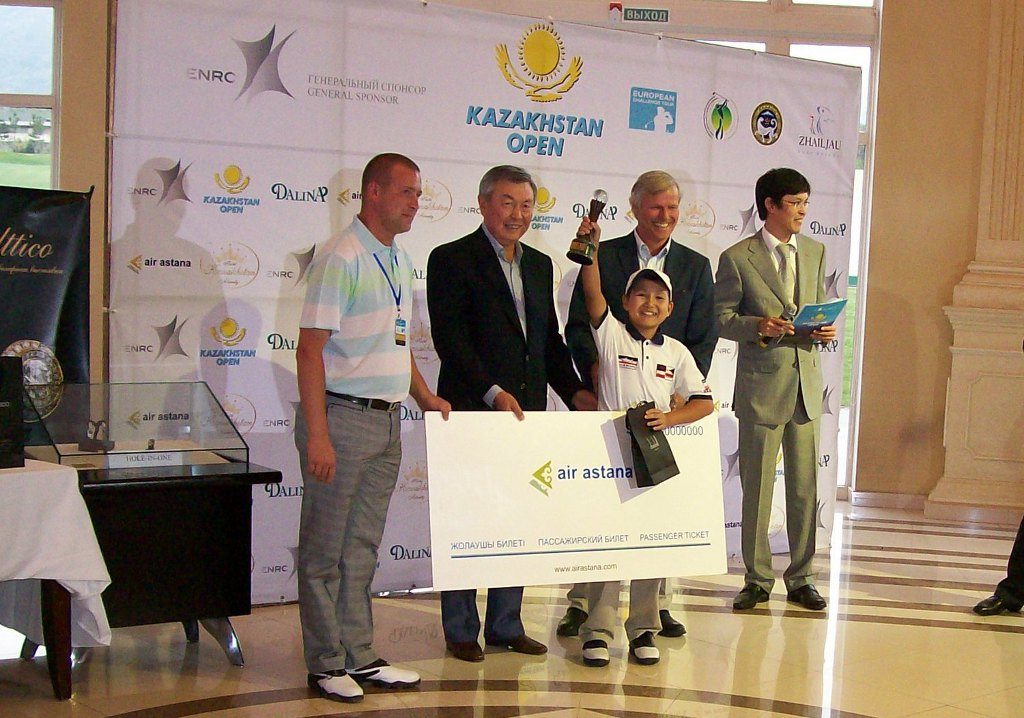 It’s hard to get a grip on, especially since one of the paparazzi is wearing a Stockport County shirt and is a dead ringer for the face in the Turin Shroud. I need a lie down.

Instead, Ruben and I finish the night in the Guns N Roses, listening to Johnny and the Gazz Band. The lead singer looks like Bonnie Tyler and sounds like Vic Reeves on Shooting Stars singing Pink. Wonderful stuff and no sign of my friends from the night before.

‘Hello Sir,’ he says. ‘Can you help me, please? The first round leader, Mr Gary Boyd? He says that the rough is very thick so he has to take his medicine. What does this mean, please? Is Mr Gary Boyd sick?’

‘That is excellent news for Mr Gary Boyd. He is physically fine. But I wonder. He says he is “getting up and down a lot”. Is he perhaps emotionally unwell?’

The unlikely backdrop and cast of characters at this event creates a unique atmosphere. The caddies are often students who speak almost no English. The volunteers are mostly made up of British and American ex-pat wives connected with the oil business and a bit giddy with the rare social excitement of something to do. The fairways are lined by enormous empty villas owned by oligarchs. For two days the players have competed for the biggest prize pot of the season in almost complete silence, with the stunning peaks of the Tien Shan mountains exaggerating the quiet.

No high heels. No pets. No undesirable consequences. Instructions for the galleries –

One of my pro-am prizes was a $100 voucher for the local airline which I am clearly never going to use. I ask the caddiemaster if he thinks my caddie Dana would find a use for it. He believes she would and suggests I visit the caddie shack at the end of play.

When I arrive there are about 40 caddies in attendance. They step back as one, creating a funnel for me to walk down, at the end of which is the still painfully shy Dana. The sense that we are bride and groom is overwhelming and very, very embarrassing.

As I hand Dana the voucher I hear cooing and a few handclaps. We don’t know if a shy smile, a hand-shake, a polite hug, a one cheek kiss or a two cheek kiss is appropriate. We do all of them and none of them at the same time.

Meanwhile Edoardo Molinari is lifting the trophy, completing a third win in a season which has transformed his prospects. Within a year he will have qualified for the European Ryder Cup team, another player to have used the Challenge Tour and its wonderful worldwide journey to advance his career.