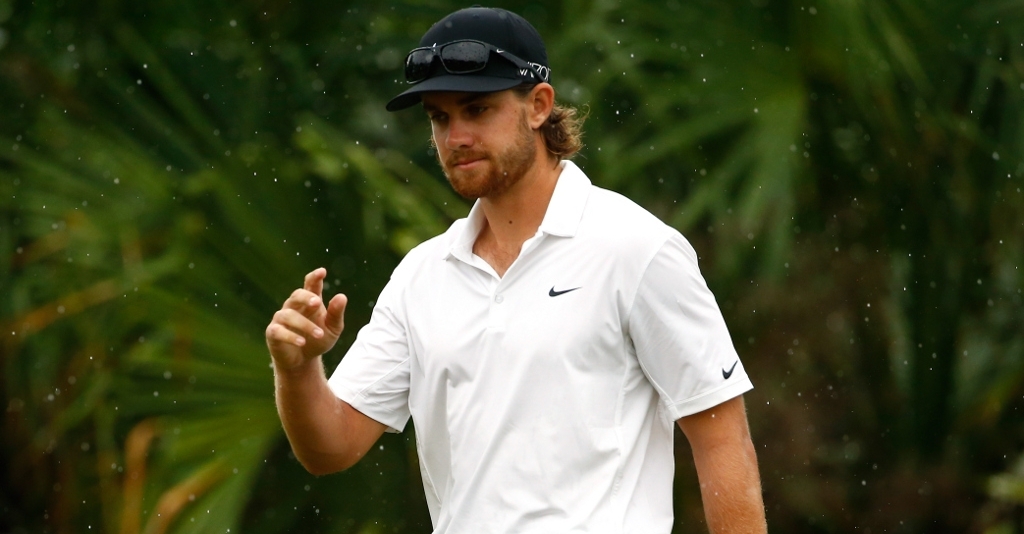 With the new year upon us, we take a look at 10 up-and-coming golfers who could make their presence felt in 2016.

American Brooks Koepka made the unusual choice of starting his professional career in Europe, picking up four wins on the Challenge Tour before graduating to the main Tour, where his breakthrough victory came at the 2014 Turkish Airlines Open, a high-profile event which forms part of the Europe's season-ending, four-week Finals Series.

Koepka moved to the PGA Tour last year, and immediately realised his potential by winning the Phoenix Open, beating Bubba Watson, Ryan Palmer and Hideki Matsuyama by one stroke.

No further wins followed in 2015, but he put himself in contention on a number of occasions – most notably at the Open Championship, where a final-round 68 secured a top-10 finish – and he remains a player to watch.

Twenty-two-year-old Daniel Berger enjoyed a superb debut season in 2015, and was rewarded for it by being named the 2015 PGA Tour Rookie of the Year, a distinction also achieved by the likes of Jordan Spieth and Rickie Fowler in recent years.

A superb rookie season is no guarantee of future success, but it certainly doesn't hurt.

At 31, Kisner is no newcomer, and has already had to go back to qualifying school on two separate occasions since joining the PGA Tour in 2011, but he appeared to have turned a corner in 2015.

After four runner-up finishes, losing in playoffs at the RBC Heritage, the Players and the Greenbrier Classic and coming second at the HSBC Champions, Kisner finally broke through with his maiden win at the RSM Classic, just reward for a remarkably consistent run of performances throuhgout the season.

Having started 2015 ranked 236th in the world, the South Carolina native now finds himself up in 17th, and could be set for even bigger things this year.

In recent years, rookies have tended to be pretty potent on the LPGA Tour, and in 18-year-old Canadian Brooke Henderson, the women's tour potentially has another big star in the making.

Henderson made major waves by winning the LPGA's Portland Classic by a massive eight strokes in August and was granted LPGA membership by the tour commissioner despite being under 18 at the time.

Only Lydia Ko and Lexi Thompson have won an LPGA Tour event at a younger age.

In 21-year-old Matthew Fitzpatrick, Europe might just have it's next big thing.

The Sheffield native made the cut at the 2013 Open Championship and finished as low amateur before he embarked on a highly successful amateur career on both sides of the Atlantic.

He turned professional after the 2014 US Open, which he qualified for by winning the US Amateur, and after a runner-up finish at last July's Omega European Masters, Fitzpatrick broke through with his maiden professional win at October's British Masters.

From 413th in the world, Fitzpatrick now finds him in 43rd.

The only bonafide amateur on the list, Bryson DeChambeau became only the fifth player in history to win the NCAA Championship and the US Amateur in the same year in 2015.

His career was thrown a curve ball when his college, Southern Methodist University, was given a postseason ban by the NCAA, but DeChambeau rebounded by finishing second at the Australian Masters in November.

He is expected to turn professional after playing in the Masters in April.

Yet another highly promising American young gun, 22-year-old Justin Thomas put himself in contention several times during the 2015 season before achieving his breakthrough win at the CIMB Classic in Malaysia back in November.

Thomas shot 61 not once, but twice, during the 2015 season, proving he already has the ability to go seriously low on the biggest stage of them all.

Standing tall at 6-foot-2 and averaging a mammoth 316 yards off the tee, 23-year-old Patrick Rodgers already has the kind of ability that can take the sting out of even the most intimidating PGA Tour course.

Since his debut professional win at the Web.com Tour's Pacific Rubiales Colombia Championship in February, Rodgers went on to earn Special Temporary Status on the PGA Tour after finishing runner-up finish at the Wells Fargo Championship.

Two top-10 finishes on the PGA Tour followed, and Rodgers was granted full Tour membership for the 2015-16 season after finishing inside the FedEx Cup's top 125 as a non-member.

Scotland's Russell Knox has been a professional for more than eight years, but it's only in the last 12 months that his game has seemingly kicked into high gear.

The 30-year-old plies his trade on the PGA Tour, and he achieved several notable top-10 finishes in 2014-15 before finishing the season in the top 50 of the FedEx Cup.

A win seemed imminent, and it finally arrived at November's high-profile WGC-HSBC Champions in Shanghai, which lifted him to 31st in the World Rankings.

He's no up-and-comer, but Tiger Woods will certainly be a player to watch this year.

Can the 14-time major champion put his injury troubles and back surgeries behind him and get back out on the course on a regular basis? Can he start putting together some good performances, perhaps even win again?

Having just turned 40, Woods must start from the bottom and try and work his way up once more. It seems like it would be a task beyond most players, but no one seems quite ready to write Tiger off just yet, least of all the man himself.