This week’s Nordea Masters is going to be party-time for Swedish golf, as it celebrates Henrik Stenson’s first win in major championship, plus Alex Noren’s stunning form and win last week at Wentworth.

To celebrate, Matt Cooper picks through the record books, peers at the video tape, compares titles either side of the Atlantic and considers achievements unrewarded by trophies, before deciding on the country’s top ten golfers.

The only man from Sweden to win both a major and a WGC title, a share of the leading total of wins on both the PGA and European Tours, the only man from his nation to win the Race to Dubai on two occasions and the FedEx Cup at all, twice a winning member of the Ryder Cup team, and a silver medallist in the Olympics. Oh, and blessed with a wonderfully deadpan sense of humour, as you can see in the video below. A legend.

An 11-time winner on the European Tour (the same number as Stenson), topped the Order of Merit in 2008 and helped Europe win the Ryder Cup in 2006. Never won in America (closest was a play-off defeat) but his achievements at the top in Europe just pinch second from … 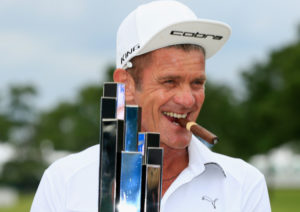 A nine-timer winner both sides of the Atlantic, but best known for twice finishing second in The Open, cruelly denied by charging golfers on both occasions. Second-best known for eating volcanic sand (“cleansing”). Third-best known for introducing Tiger Woods to his own children’s nanny (she became Mrs Woods). Fourth-best known for being the son of Sweden’s favourite comedian of the 1970s and 80s (he did impressions of Liberace and Ronald Reagan).

Now a nine-time winner in Europe and the first Swede to claim the Tour’s flagship event, the BMW PGA Championship. This year he’s also notched his best results in the WGC and on the PGA Tour. The future looks bright for a man who once blogged and was obsessed about being very good at it, then got a camera and was obsessive about taking great photos, then lifted weights with Johan Edfors and became obsessed with that. He now seems obsessed with winning.

One of the hardest workers on tour…

5. CARL PETTERSSON – Not the Sailor

Just the one win in Europe, but five in the States, which ties him with Stenson and Parnevik as Sweden’s best on the PGA – and that tally also includes the classy Memorial Tournament. Not to be mistaken for Carl Pettersson the Swedish sailor who was crowned king of an island in Papua New Guinea when he was shipwrecked there in 1904.

He missed out on becoming the first Swede to win on the European Tour (see below) but Forsbrand was the strongest of the early wave of Swedes to hit the circuit in the 1980s, eventually winning six times. Also lifted the World and Dunhill Cups. 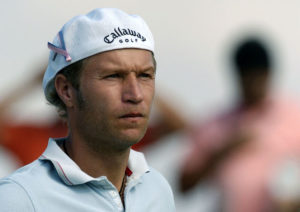 Claimed six wins on the European Tour, completed the 1991 World Cup-Dunhill Cup double for his nation, and, with a 60% accumulation of points from two matches, has Sweden’s best Ryder Cup record. A college team-mate of Phil Mickelson, he often wore a beret backwards, though with greater elegance than Frank Spencer ever managed.

Sometimes derided for aiming away from trouble around the greens rather than hunting pins, but it’s not done him much long term harm as he’s accumulated a superb career taking in six European Tour wins, tied third in the Masters, four top tens in the WGC and membership of two winning Ryder Cup teams.

Very nearly became the first Swedish winner of The Open on his major championship debut, when second behind David Duval in 2001. A six-time winner in Europe, he also played on the successful 2002 Ryder Cup team, where his furious fist pumps and facial expressions called for Viking, rather than ice cool Scandinavian, allusions.

Like Fasth he took to major championship golf like a Viking to plunder. He was fourth in the 2013 PGA Championship, his second major start, and tied second in his very next appearance in the big ones, the 2014 Masters. At Augusta he was in contention all week and the only man to post four sub-par rounds. Those efforts, and three PGA Tour wins, earn him the last spot in the top ten.

The Dandy – Jarmo Sandelin was a five-time winner on the European Tour, but never in the bigger events. Represented the Swedish national team at mini-golf and known for his outlandish personality. Once used a 57-inch long driver, wore snakeskin golf shoes and see-through shirts, and had dust-ups with Mark O’Meara and Phil Mickelson. 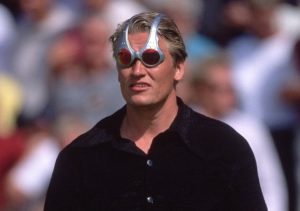 The Wave Rider – Johan Edfors’ first year on the European Tour was a struggle. His second, in 2006, saw him win three times. A prodigious driver of the ball, his iron play was under-rated, and his weakness was revealed in the memorable line by a US Open spectator: “Looks like Jesus, putts like Mary.”

The Putter – Fredrik Jacobson is the flipside of Edfors. His swing is an ugly swipe, his short game a work of art. A four-time winner on the main tours and finished fifth in the 2003 US Open.

The Cult Hero – Ove Sellberg will be little known to modern golf fans, but those who grew up in the 1980s, Sellberg was something of an unlikely champion thank to winning the Epson Grand Prix of Europe, a rare event on TV in those days and the first Swedish victory on the European Tour.

The Elephant in the Room – Annika Sorenstam won 93 times round the world, 72 of them on the LPGA, and no less than ten were majors. An all-time great of world golf nevermind Swedish golf. 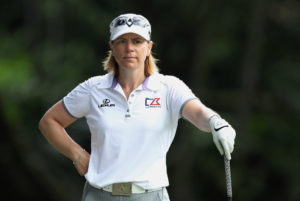