Presidents Cup: A look back 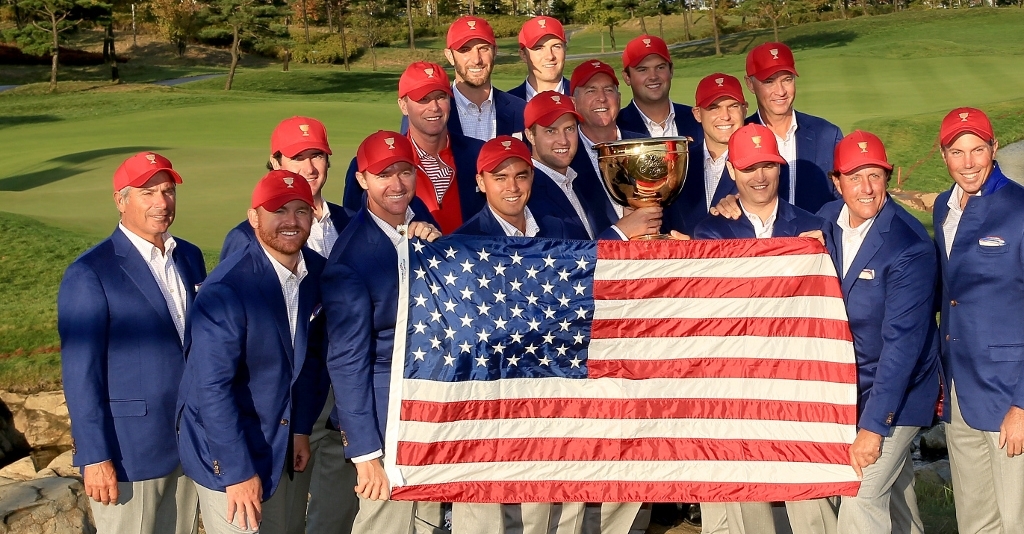 Another Presidents Cup, another victory for the US team. The Internationals came desperately close on a thrilling final day in South Korea, but it wasn't to be.

The International team will look at the first day of the competition as the one that ultimately cost them a chance to upset the odds.

The Americans came out firing on Thursday, racing to a 4-1 lead that, despite a spirited fightback from Nick Price's men over the next three days, would prove unsurmountable.

Jordan Spieth and Dustin Johnson started the victory procession when they won 4&3 against the International Team pair of Danny Lee and Marc Leishman.

Phil Mickelson and Zach Johnson would follow suit by winning 2-up against Jason Day and Steven Bowditch, while Rickie Fowler and Jimmy Walker would win 5&4 against Anirban Lahiri and Thongchai Jaidee.

The Internationals eventually broke the run of losses when the all-South African pairing of Louis Oosthuizen and Branden Grace won 3&2 against Matt Kuchar and Patrick Reed.

However, the late fight-back would be thwarted when Bubba Watson and JB Holmes won 3&2 against Adam Scott and Hideki Matsuyama to hand the USA their fifth consecutive first session victory in the tournament.

To their credit, the Internationals would not be blown away again, and came roaring back on day two.

A much improved performance would see them reduce their three-point deficit to just one as they won Friday's four-balls 3-1-1.5.

Oosthuizen and Grace, the only International pair to win on Thursday, got the day off to a positive start when they won 4&3 against respective world number one and number eight Spieth and Dustin Johnson.

The comeback continued when Lee and Sangmoon Bae won 1-up against Fowler and Walker before the USA managed to stop the rot in the next two match-ups.

First Zach Johnson and Mickelson stole a share of the spoils against Scott and Day, then Holmes and Watson claimed a full point by winning 2-up against Leishman and Bowditch.

Jaidee and Charl Schwartzel put the finishing touches on a much-improved International showing, however, when they won 2-up against Bill Haas and Chris Kirk in the final match of the day.

Saturday's action would see the two teams play to a stalemate, sharing the spoils from the day's four foursomes and four four-balls matches to enable the Americans to maintain their one-point lead heading into the final day.

Oosthuizen and Grace maintained their winning run as they beat Reed and Fowler 3&2 in the morning foursomes.

The next two matches were halved – Scott and Leishman drew with Watson and Holmes, as did Bae and Matsuyama and Haas and Kuchar.

Dustin Johnson and Spieth claimed a narrow 1-up victory over Day and Schwartzel before the action continued with the afternoon four-balls.

Once again Oosthuizen and Grace did their bit by beating Holmes and Watson 1-up, while Bae and Matsuyama continued their impressive performance with a 6&5 thrashing of Walker and Kirk.

But Mickelson and Zach Johnson were able to beat Scott and Lahiri 3&2 and Reed and Spieth defeated Day and Schwartzel by the same margin as the US team took a 9.5-8.5 lead into the final day.

All would be decided on the final day. The International had done well to make it a one-point game after being blown off the course on Thursday.

But despite another spirited performance on Sunday, the Americans would ultimately hold on to the one-point lead they had held since day two to close out a narrow 15.5-14.5 victory.

Scott, Matsuyama, Bowditch, Leishman and Grace all picked up International victories, but Dustin Johnson, Zach Johnson, Mickelson, Kirk and Haas all earned points for the US team.

Reed grabbed a valuable half against Oosthuizen, while Watson did the same against Jaidee.

A sixth consecutive Presidents Cup victory for the US team, then, who continue to dominate the competition to a degree they can only dream of in the Ryder Cup.

The Internationals, meanwhile, are getting closer, but have yet to unlock the secret to victory.