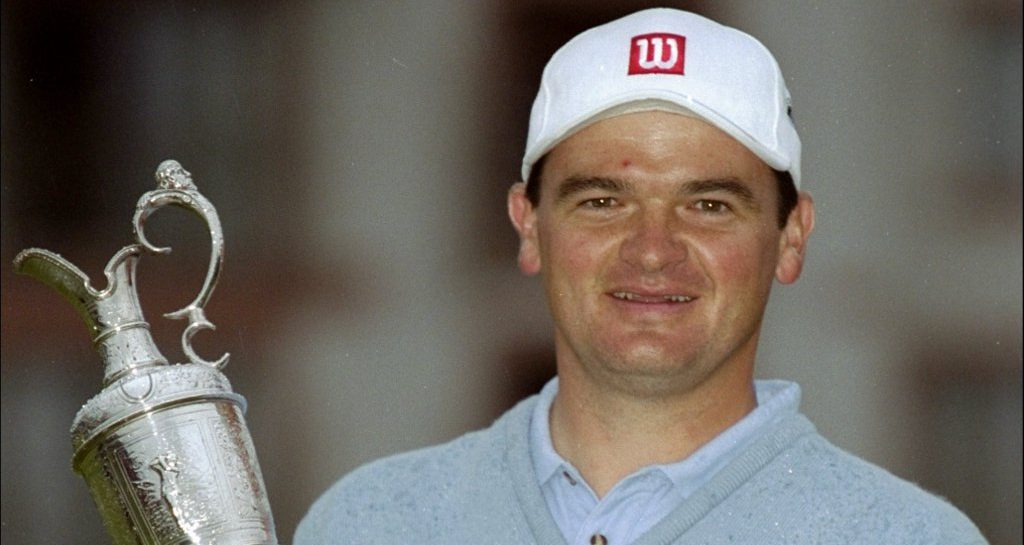 No-one who watched the Open Championship of 1999 is ever likely to forget it. That final round. Those brutal conditions. A leader holding a significant advantage. A cast led by Paul Lawrie and Jean Van de Velde.

Somehow, however, we’ve completely forgotten that it was actually a re-run of sorts, as if the collective memory has blotted out a bizarre overture which took place five months before in Doha.

The roles were reversed that first time and the closing scenes were very different, but in overlooking the Qatar Masters of 1999 we’re missing out on an incredible, almost eerie, prologue to the Open Championship which followed, and might even have helped shape, it.

At the end of 1998 Paul Lawrie’s professional CV was solid, boasting seven consecutive years on the European Tour and a maiden win in 1996. On the other hand the previous two seasons had lacked sparkle and some muttered about the manner of that victory (“I was a little bit fed up hearing about it being over two rounds,” he told the Tour website, “I still felt a win is a win”).

On Christmas Day he, wife Marian and first-born Craig welcomed the birth of a second son, Michael. Seven days later the New Year dawned and with it Lawrie’s 30th birthday. Landmark moments, both of them, perhaps fuelling the determination to re-invigorate his career by turning to close friend and one-time fellow tour pro Adam Hunter.

“He was the person who made me the golfer I became,” Lawrie told Golf365 ahead of this week’s Qatar Masters. “I’ve had some really good coaches who have all helped me, but Adam was the difference.” 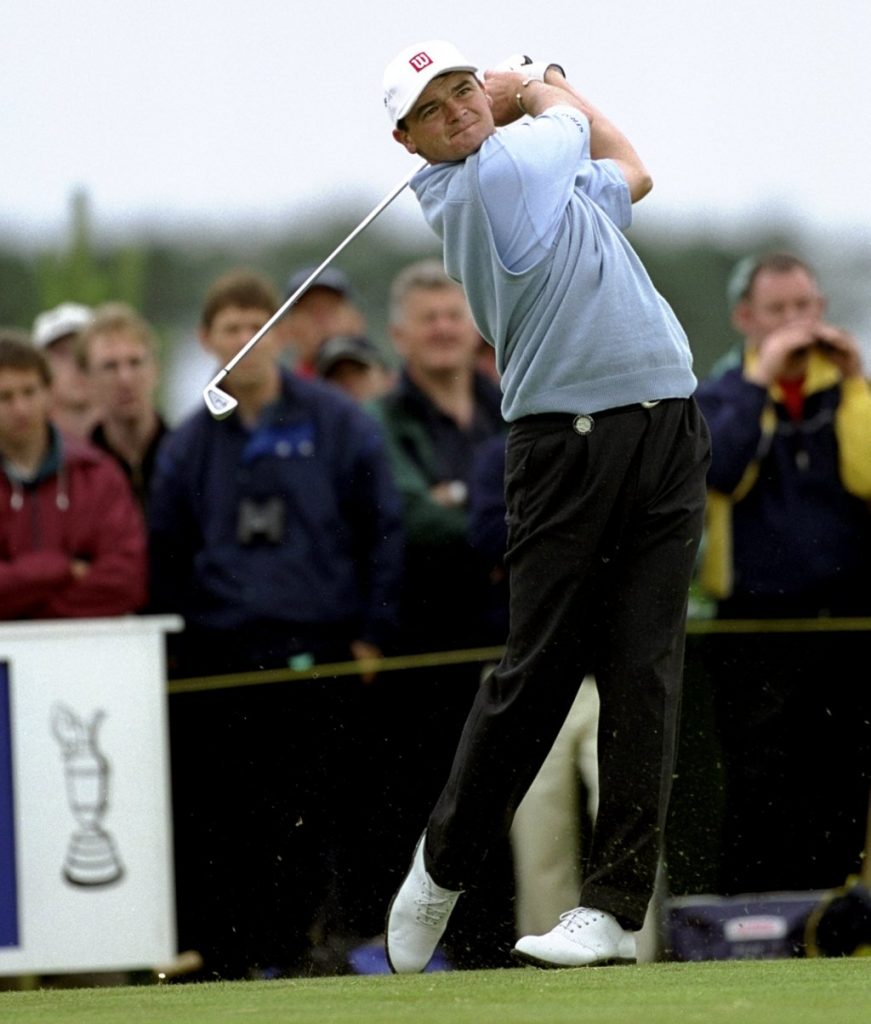 He opened the 1999 season with 76-78 in the Dubai Desert Classic to miss the cut, but Hunter made a few swing suggestions, Lawrie liked them, and next up was Qatar.

“Doha plays like a links course where you have to be in control of your ball flight and sometimes run shots into greens instead of flying it all the way,” Lawrie continued. “I’ve always loved playing golf like that.”

Twelve months earlier Lawrie’s compatriot Andrew Coltart had claimed the inaugural Qatar Masters and after the first round another Scot, Raymond Russell (fourth in the previous year’s Open Championship), held a share of the lead. The heat, Bermuda grass and desert backdrop might have been unfamiliar, but the Peter Harradine design and the Qatari wind was clearly making the Scottish feel right at home.

Lawrie joined the party on Friday. His bogey-free round of 7-under-par 65 earning him a two-shot advantage over Soren Kjeldsen, John Bickerton and Frenchman Jean Van de Velde.

“I feel fantastic and in control,” Lawrie said afterwards. “I’ve not made a bogey in 36 holes and only looked like making one once.” 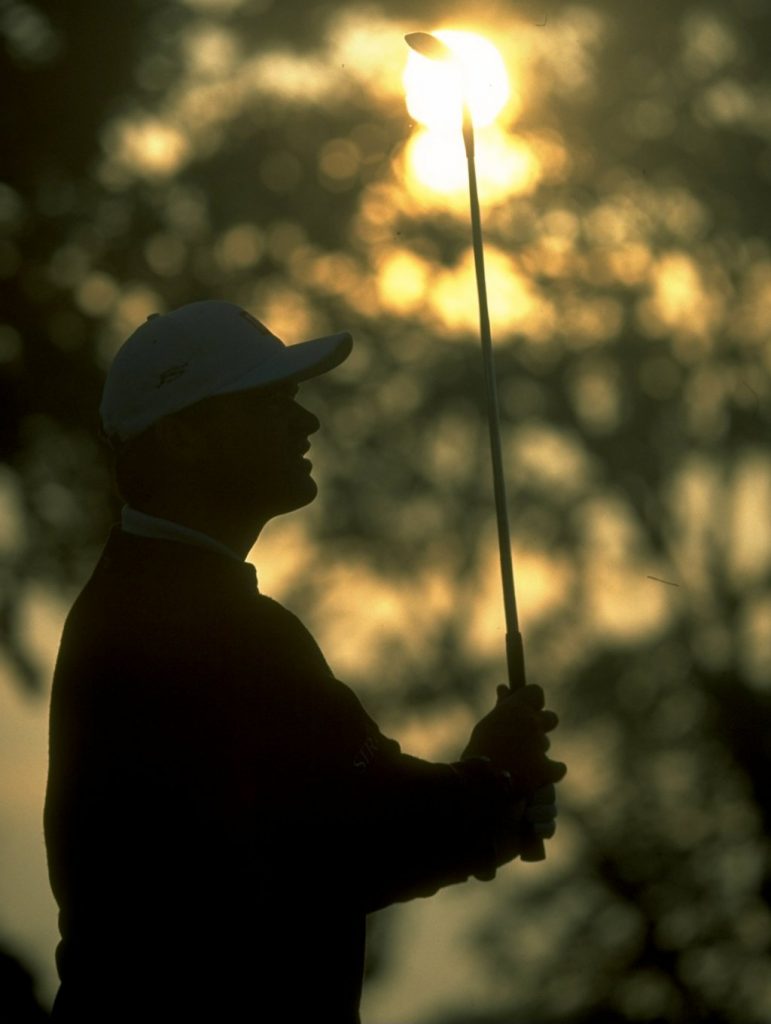 On Saturday the wind was up again. Only 11 men went sub-70 yet Lawrie was imperious, tying the low score of the day, a 67, to open up a five-shot gap on Van de Velde, now alone in second.

“I’ve been there before,” Lawrie said, referencing how he turned a six-swing edge into an eight-shot victory in the 1992 Under-25 European Open, an unofficial event. “I won the Scottish PGA later that season and the following year I finished sixth at The Open.”

When the Tour’s press officer asked the Frenchman of his Sunday strategy he said: “I’ve seen bigger leads lost so I’ll keep plugging away.”

Throughout Sunday the chasing pack pushed hard but they failed to break Lawrie’s lead. EuropeanTour.com reported that midway through the round he acknowledged “that I had to do something ridiculously silly” not to win. Standing on the final tee with a seven-shot lead an all-too-vivid and recent memory focused his mind.

“I took a ten in a North-east of Scotland Winter Alliance about five weeks ago in Buckpool,” he explained. “It was the scene of my first win as a professional. I had three out of bounds and it wasn’t much fun.” 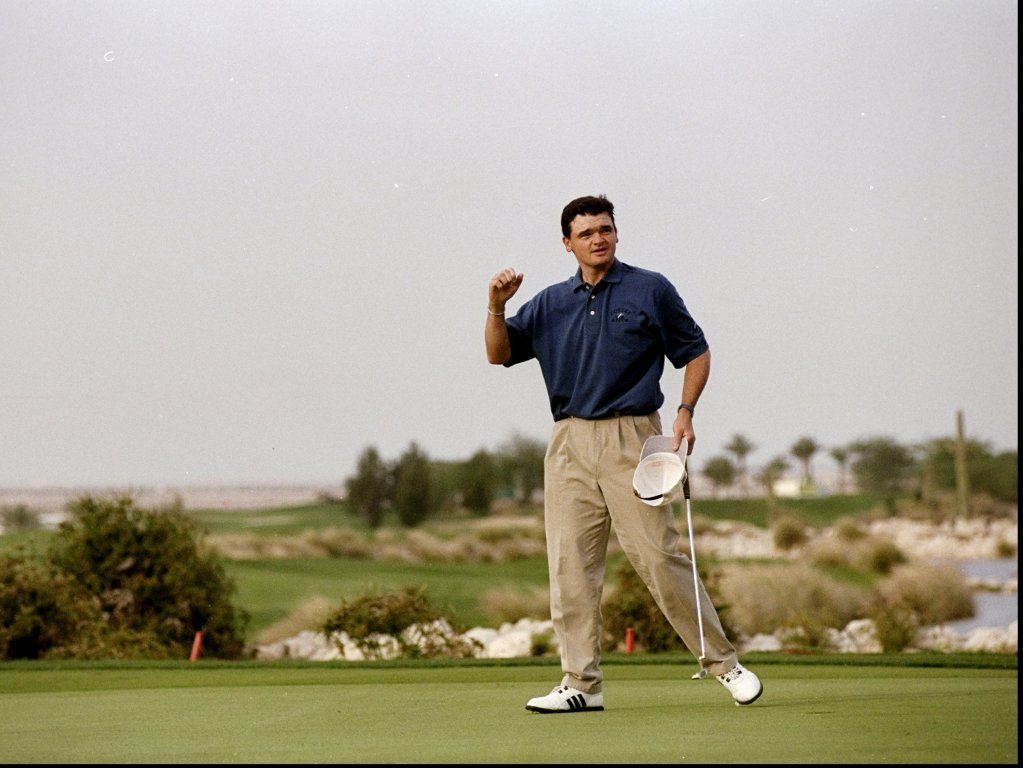 These Doha quotes, by both Lawrie and Van de Velde, are extraordinary because, of course, we know what they didn’t: we know what happened later that year at Carnoustie. It’s impossible for us to read them now and not think how portentous they appear.

“My target now is to try for another win before the end of the year,” concluded a gloriously oblivious Lawrie, adding with wonderful understatement: “I don’t see why not.”

And so to Carnoustie. This time it was Van de Velde who constructed the slender 36-hole advantage and then stretched it to five strokes by the end of Saturday. We all know what happened next.

That Sunday the field averaged 74.53 with Lawrie posting a best-of-the-day 67. His pursuit of the leader was sustained and strong. Did the appearance of his name on the leaderboard revive conscious or subconscious memories for Van de Velde?

His last opportunity to win had been in Qatar, Lawrie had been too good for him, and now that very man loomed large in his mental wing mirrors.

In Doha he had been well aware that big leads can disintegrate. He’d used the knowledge to propel his chase of Lawrie, albeit without success. The same thought might easily have returned to his mind when it was his turn to stand on the 72nd tee. This time as threat rather than inspiration.

Interesting conjecture, but that’s all it ever can be. What we know for certain is that Lawrie had departed Doha on a high. “It gave me a massive shot of confidence,” he reiterated last week. “The work with Adam was really starting to progress. I felt very confident it wouldn’t be my only win that year.” 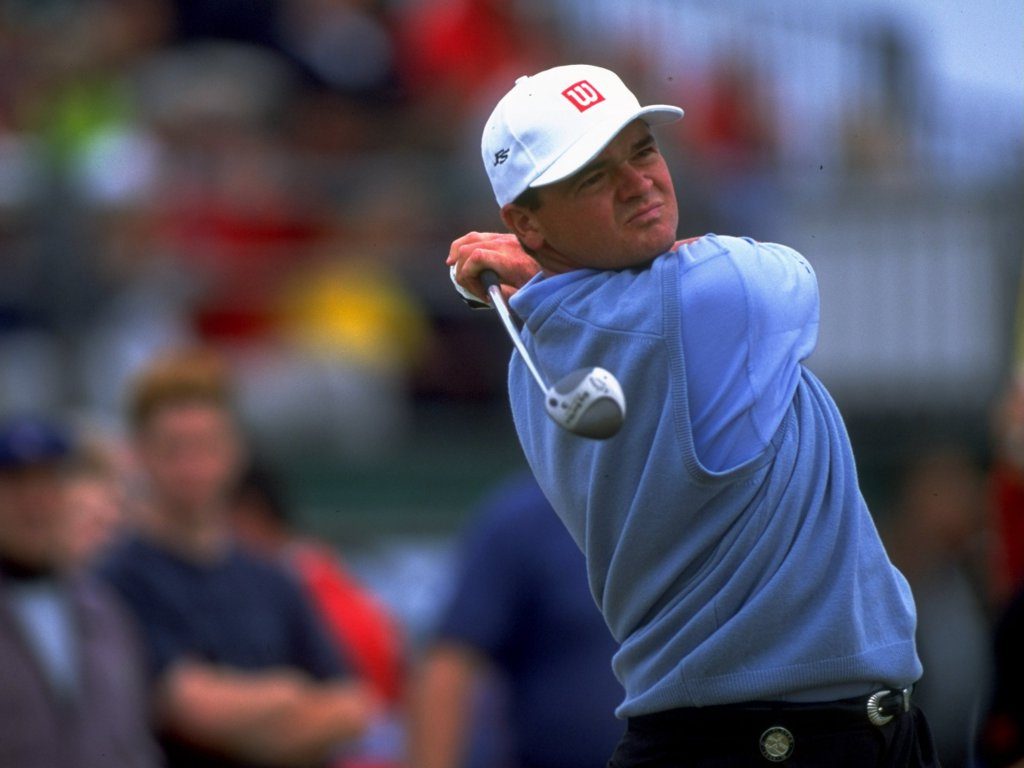 Immediately after the first triumph he’d told EuropeanTour.com of “windswept days on the links of Cruden Bay when he could not hit a 3-iron further than 100 yards into the gale”. Unlike speculative hunches, there’s little doubt that this experience was vital on that final afternoon in Carnoustie.

As was his ability to remain in the zone. The tumultuous errors he had avoided in Qatar had befallen Van de Velde. It’s one thing for observers to be astonished by those famous scenes. Another for a competitor to remain hungry, pounce and then complete victory with one of all-time great approach shots across the Barrie Burn, that snake-shaped trap which sucks in hopes and dreams before spitting them out into the North Sea.

Check out Paul’s 4 iron shot from Carnoustie that @jacknicklaus described as ‘a great shot that I’ll never forget.’ 👇 pic.twitter.com/oso8krw4n2

“I don’t think back to Carnoustie as much now as I used to,” Lawrie said. “But it still fills me with immense pride what we achieved that week. Plenty of players get the opportunity to win a major so I was very proud to play and conduct myself in that manner. Following Jean in for birdie at 17 in the play-off was the putt for me. I felt very calm and in control and knew I would win it from there.”

The fact he used the word “we” is telling. His autobiography make very little mention of the Doha win and absolutely none of Van de Velde’s part in it (Lawrie often jokes about his poor memory however).

But the book does pay frequent tribute to the profound connection he experienced with Hunter, who sadly died in 2011. Moreover it reveals his coach’s vital psychological role ahead of the play-off, when he urged Lawrie to look into the faces of Justin Leonard and Van de Velde on the tee.

When he did so he saw white-faced fear in the former and a dread which larking about failed to mask in the latter. Their worries gave him strength. “It is amazing how accurate and prescient Adam was,” he wrote of that week, when the coach also insisted: “If you don’t make a double bogey, you’re going to have a chance to win.”

Only two players in the entire field avoided a double bogey: Lawrie and Leonard.

The events of that 1999 season have echoed ever since.

In 2006 Van de Velde stood on the 18th tee in the final round of the Madeira Island Open with a four-stroke lead. He took a double bogey six, narrowly avoiding a repeat of his Carnoustie calamity. It was the second and final win of his European Tour career.

In 2012 Lawrie completed a second dominant victory in Doha, this time leaving future world number one Jason Day four shots in his wake. By the end of the year he had fully contributed to the Europe’s Ryder Cup Miracle of Medinah. 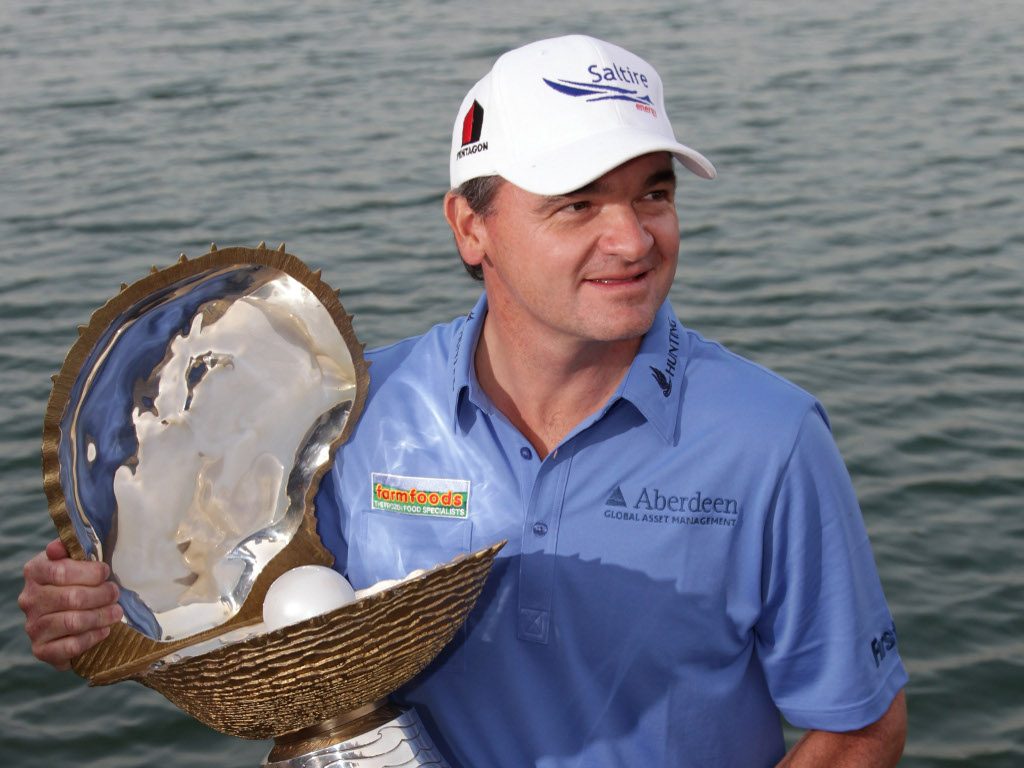 The Qatar Masters has continued to be ruled by linksland specialists. Lawrie’s first success was followed by that of one-time Amateur Champion Rolf Muntz. Adam Scott, Ernie Els and Henrik Stenson emulated Lawrie in lifting both the Mother of Pearl Trophy and the Claret Jug. Thomas Bjorn, Sergio Garcia, Retief Goosen, Chris Wood, Sergio Garcia, Branden Grace and even Robert Karlsson have all come close to doing so.

Two years ago Van de Velde became eligible for his first senior major championship. The host club that year? Incredibly, it was Carnoustie.

This year Lawrie won’t return to Carnoustie, his hopes ruined by an on-going foot injury. But he won’t forget what happened in July 1999, even if the details of the win earlier that year have become a little murky.

Safe to say the Championship Course is looking a little more @TheOpen ready than it did a few hours ago 🌞❄ pic.twitter.com/NaGq6yOGAb