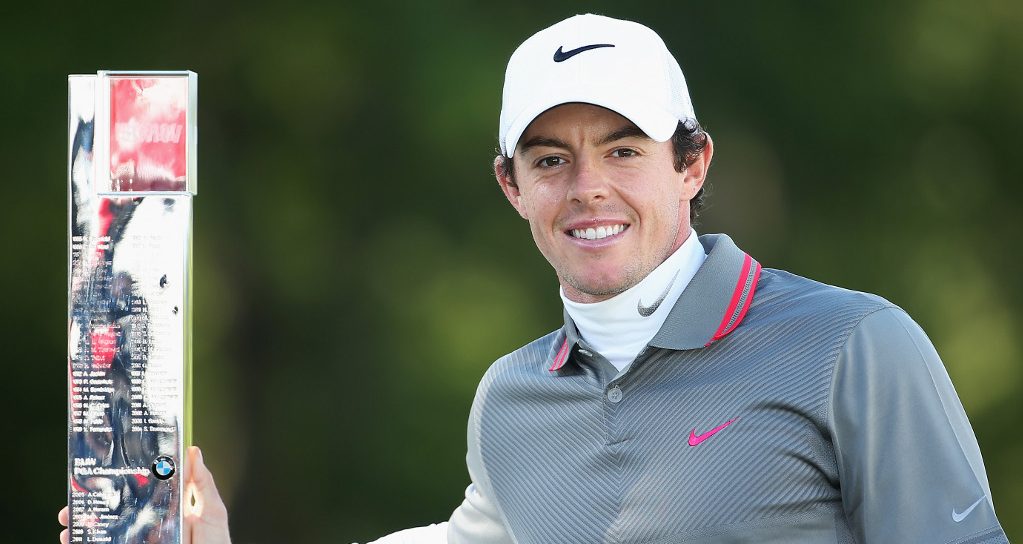 The PGA Championship was founded in 1955, and since its inception has been labelled the European Tour’s flagship event.

There have been many famous victories throughout the years, and here we recall some of the most memorable ones since the tournament made Wentworth its permanent home in 1984.

10 – Costantino Rocca wins after battle with Nick Faldo in 1996 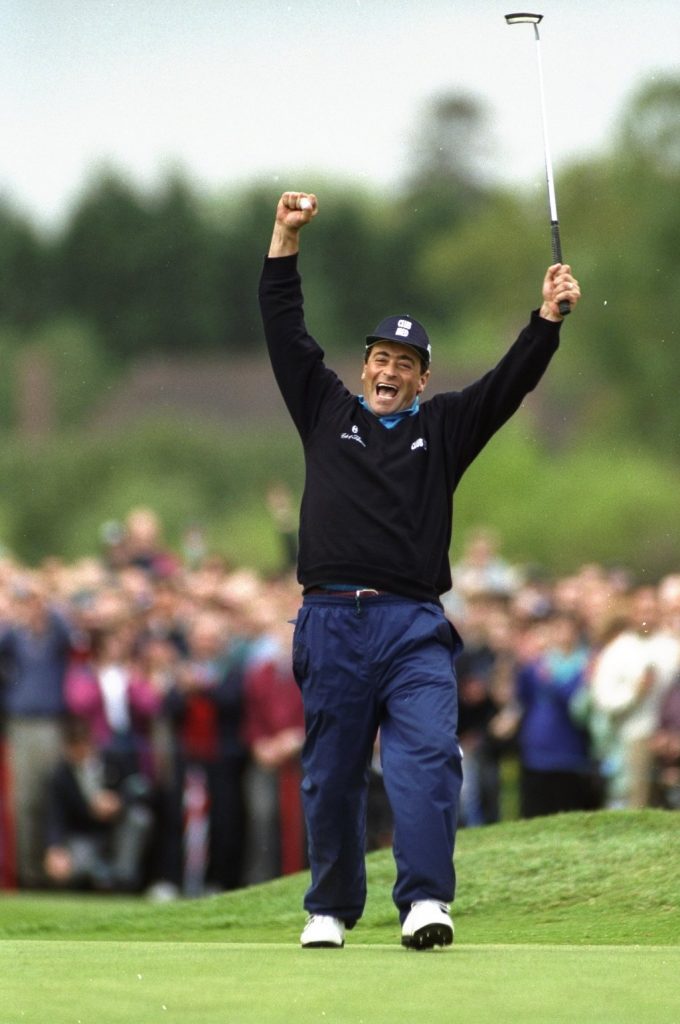 In 1996, Costantino Rocca won his third event on the European Tour, and his first and only PGA Championship at Wentworth. The Italian was part of an exciting final-round battle with Nick Faldo, who was looking to win the event for a record fifth time.

Rocca carded 69, 67 and 69 in the first three rounds, and led Faldo going into the final round, after the Englishman shot 72 in the third. Paul Lawrie also put himself into contention after carding 65 and 68 in rounds two and three.

Lawrie could not repeat his second and third round performanc, however, and had to settle for a 70, while Faldo produced a good performance in the final round, shooting a 68 to put pressure on Rocca to hold onto his lead. However, an equally solid display from Rocca saw him claim victory, as he holed a lengthy putt on the 18th to sign for a 69 and finish two strokes clear of Faldo and Lawrie. 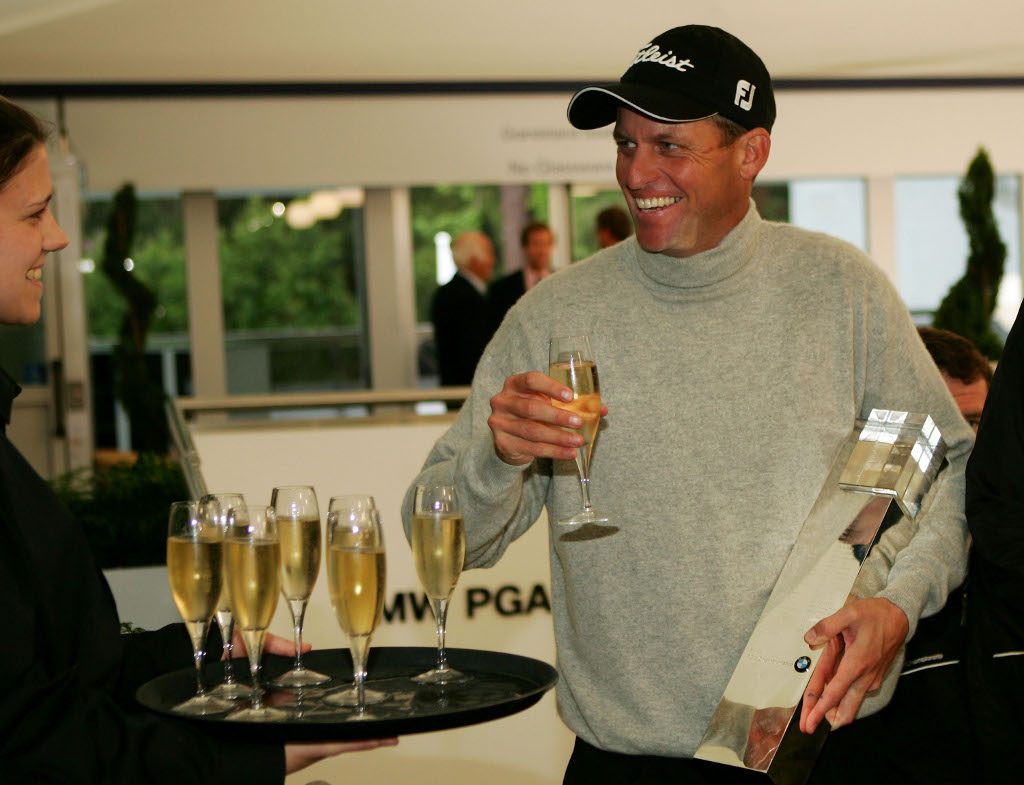 The 2007 PGA Championship at Wentworth saw Anders Hansen, who won previously in 2002, become only the seventh player to repeat the feat.

Hansen carded 74, 70 and 67 in the first three rounds, and trailed Justin Rose by a stroke heading into Sunday. However, Rose’s score of 71 in the final round allowed Hansen to finish tied for the lead and force a play-off after carding a 69.

The latter holes of the final round were intense, with Hansen needing to make an 25-foot putt to force a play-off. He duly made it, and then drained another 18-foot putt for a birdie in the play-off to claim his second PGA Championship title. 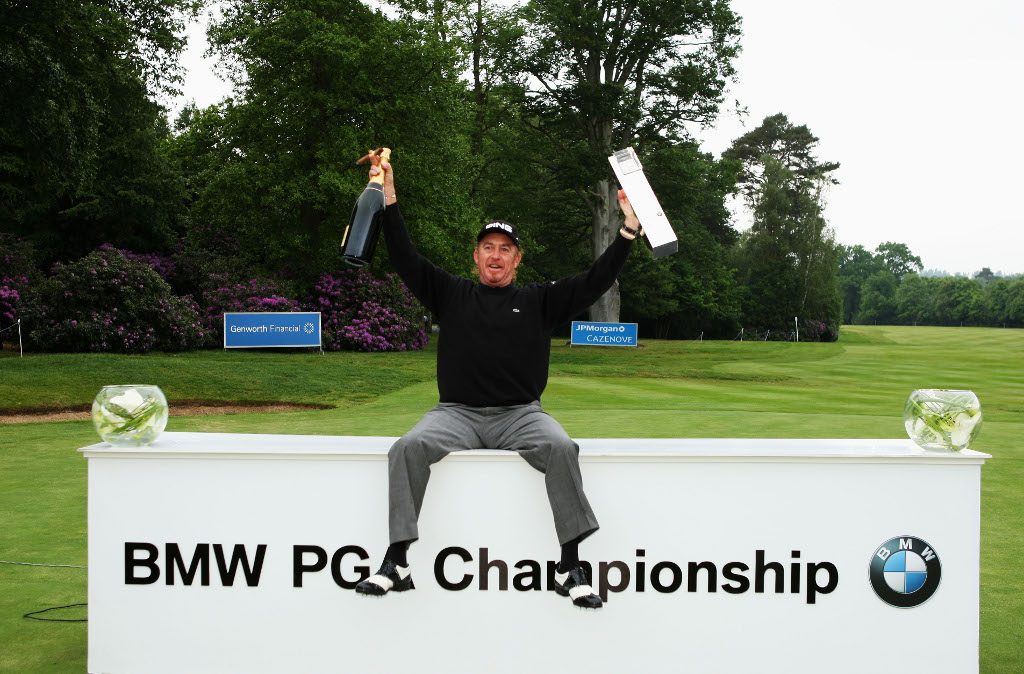 One of the most unforgettable moments at the PGA Championships at Wentworth was Miguel Angel Jimenez and Oliver Wilson’s final-round battle to force a tense play-off between the pair in 2008.

Jimenez carded 70, 67 and 72 in the opening three rounds, while Wilson shot 70, 66 and 73. They were both four strokes behind leader Robert Karlsson, who seemed destined for victory heading into the final round.

But the Swede could only manage a 74, opening the door for a comeback from both Jimenez and Wilson. Both players had chances to win on the 18th in a thrilling end to the final round; Wilson missed a 15-foot putt for a birdie, and Jimenez then misjudged a chip and had to settle for par. The Spaniard eventually won with a birdie on the 18th in the play-off. 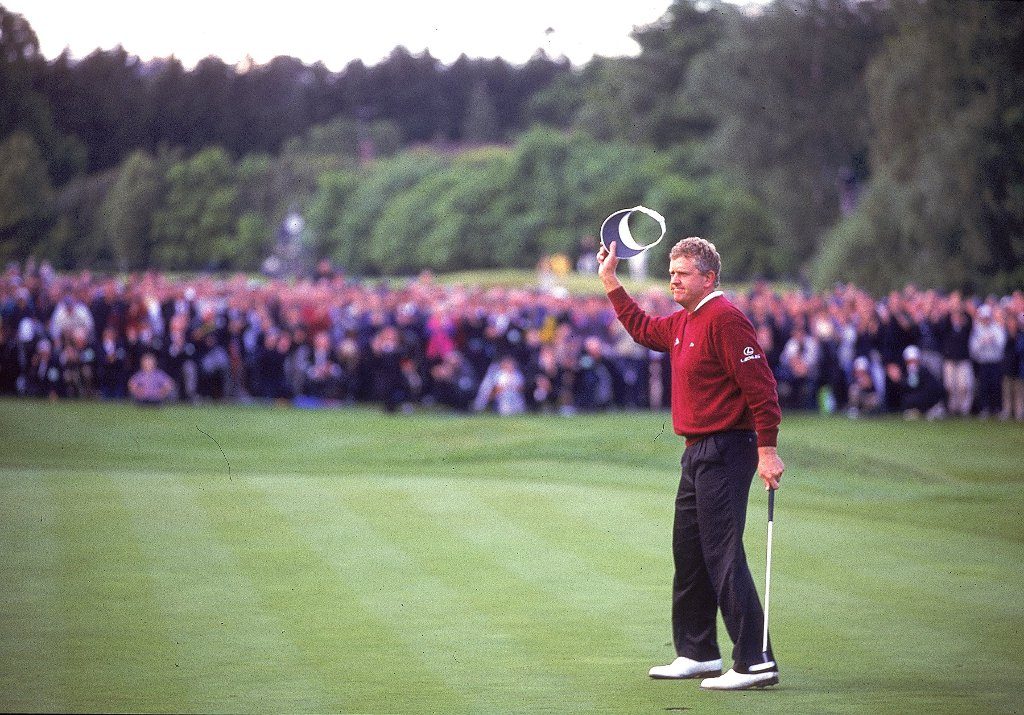 The 2000 PGA Championship at Wentworth belonged to one man, Colin Montgomerie, who became the first – and so far only – player to win the event three years in a row.

Montgomerie carded 67, 65 and 70 in the first three rounds to lead heading into Sunday. The final round was an exciting one, with three players, Darren Clarke, Andrew Coltart and Lee Westwood, all chasing down Montgomerie.

Clarke produced an excellent final round, shooting 66 to finish on -14. He was joined on that total by Coltart, who shot 69, and Westwood, who had a 68. However, despite the pressure from the chasing pack, Montgomerie held his nerve, a rock-solid 69 handing him a three-shot win. 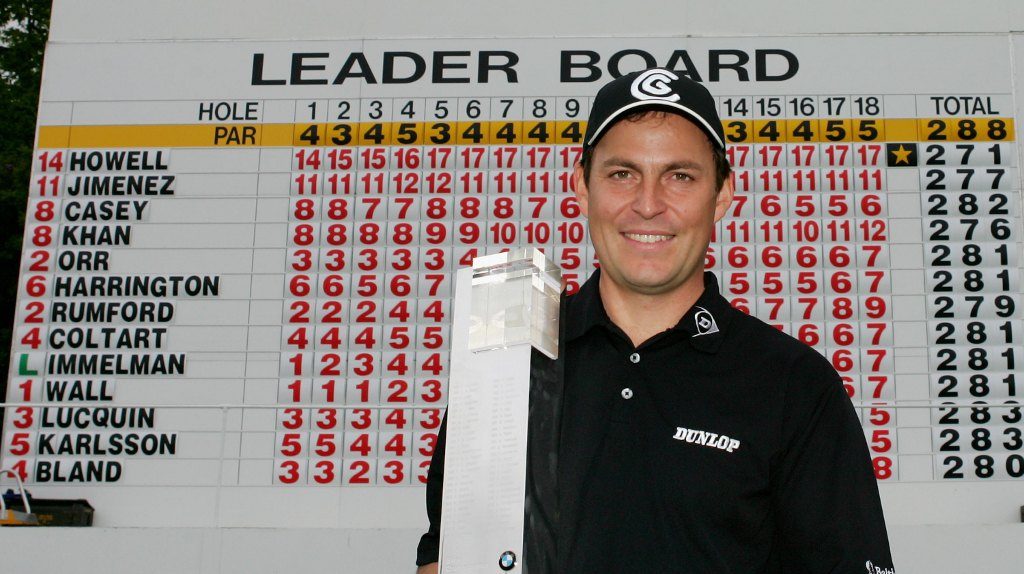 In the 2006 edition of the PGA Championship, David Howell became the first English winner at Wentworth since Nick Faldo in 1989.

The then 29-year-old was in fine form throughout the event, carding 68, 65 and 69 to lead by three strokes heading into the final round.

Simon Kahn shot a final-round 68, to put a little pressure on Howell, but a three-under-par 69 was enough to ensure a comfortable five-stroke victory. The win would move Howell up into the rarified air of the world’s top 10. 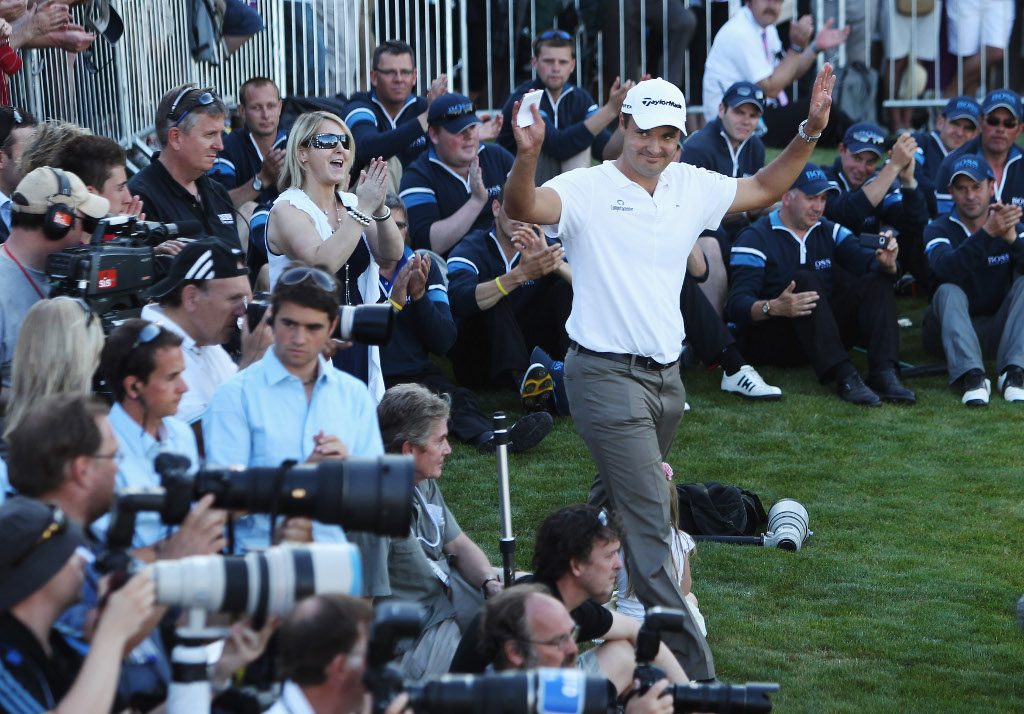 The 2010 PGA Championship will be remembered for, arguably, the most astonishing and surprising victory in the tournament’s history. Simon Khan, ranked 471st in the world heading into the event, came back from a seven-shot deficit in the final round to win the tournament as a qualifier.

After rounds of 72, 69 and 71 over the first three days, Khan looked on course for a respectable but unspectacular finish.

But the Englishman had other ideas, draining a 25-footer on the 72nd green to sign for a five-under 66, which was enough to see him win the tournament a stroke clear of both Luke Donald and Fredrik Andersson.

Khan’s win is the joint biggest-last round comeback win in the event’s history. 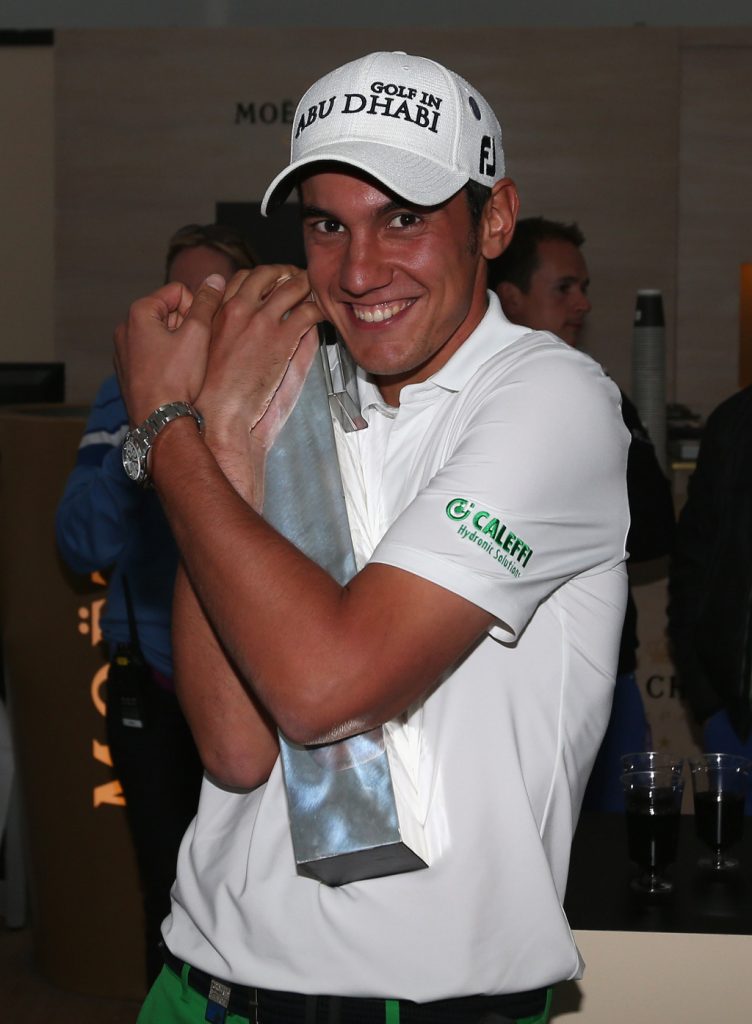 The 59th edition of the event in 2013 proved to be one of the most exciting. At 20 years old, Matteo Manassero became the youngest winner of the PGA Championship, beating Simon Khan and Marc Warren in a dramatic play-off.

Manassero went into the final round tied for third with Marc Warren, two shots off leader Alejandro Canizares, after carding 69, 71 and 69 in the opening three rounds. Canizares could only shoot 72 in the final round, allowing the chasing pack to battle it out for the win.

A solid final round of 69 from both Manassero and Warren meant the pair finished as joint leaders on -10. They were joined by Simon Khan, who produced another last-day comeback after a 66. But Manassero won the playoff on the fourth hole to claim his maiden PGA Championship title. 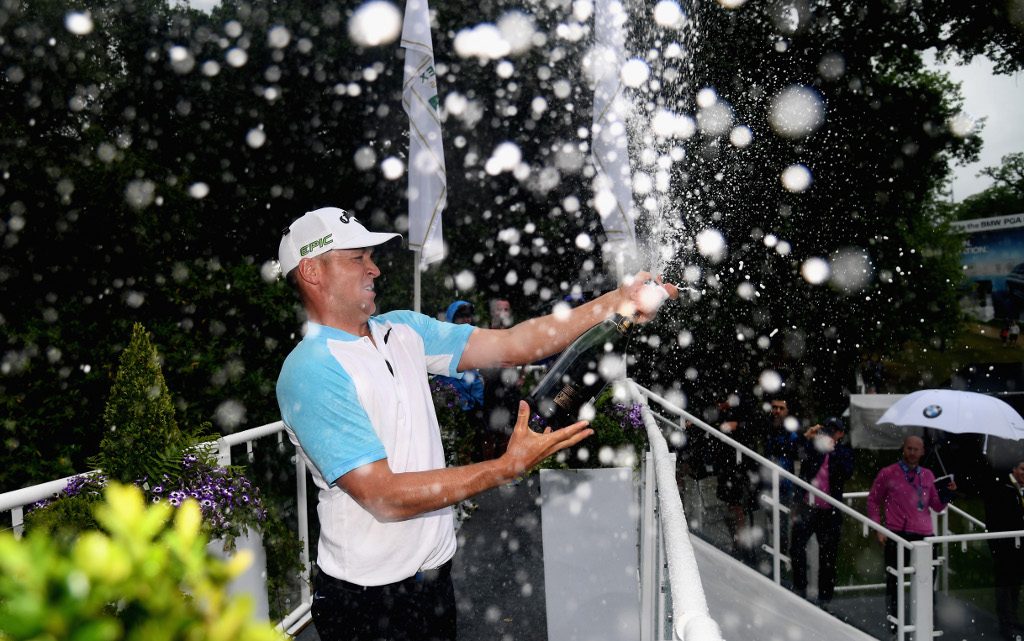 Last year’s edition of the PGA Championship produced one of the most enthralling comeback wins in the tournament’s history. Similar to Simon Khan’s final day heroics in 2010, Alexander Noren came back from a seven-shot deficit on the final day, setting a new course record to surge to victory.

Noren shot 68 in the first round, placing him joint fifth and two shots off the lead. However, after shooting 75 and 72 in the second and third rounds, he looked to be well out of contention heading into the final day, tied for 21st.

Few could have predicted what came next, as Noren produced the greatest round ever witnessed at the PGA Championship – a course-record 62, including an eagle at the 18th that meant he went six under for the last seven holes – to secure a two-stroke victory over Francesco Molinari. 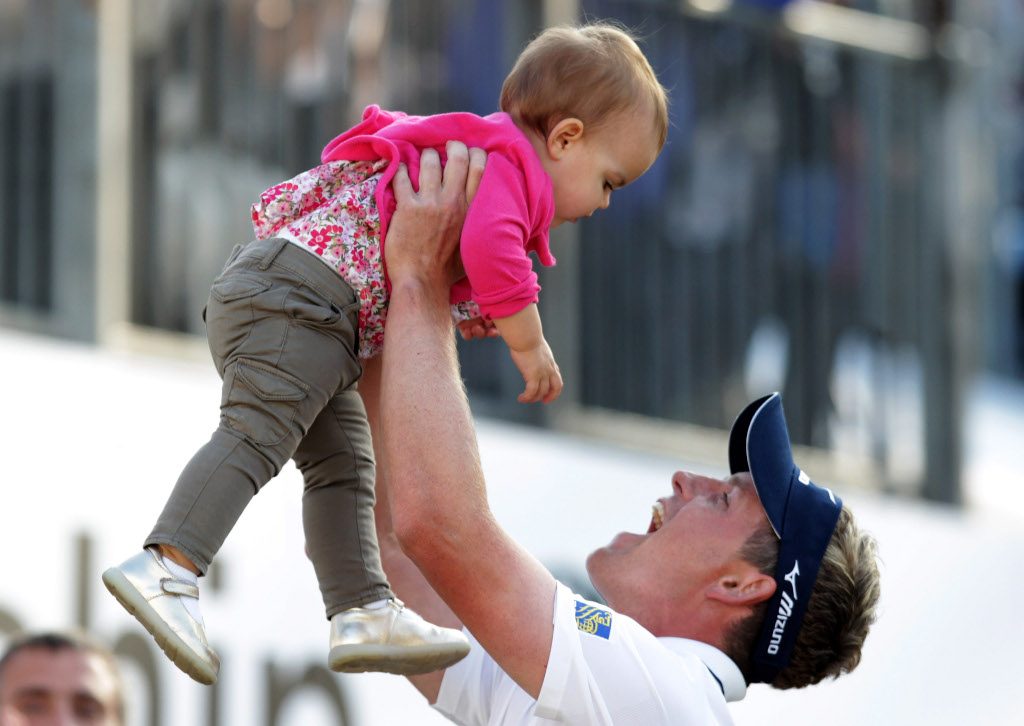 In one of the most thrilling PGA Championships, Luke Donald edged out Lee Westwood in a sudden-death playoff to win the tournament and replace Westwood as the world number one.

Donald knew heading into the event that he would overtake Westwood as the top of the rankings if he finished ahead of his fellow Englishman. This added even more to the tension throughout the event, with Donald the joint leader with Matteo Manassero on -5, and Westwood two shots back, heading into the last round.

Westwood carded a 68 to put pressure on Donald, who missed the opportunity to win the tournament following a final round of 70 that saw him finish joint first with Westwood on -6. The play-off was decided in dramatic fashion on the first extra hole, after Westwood found the water on the 18th to seal his fate in more ways than one. 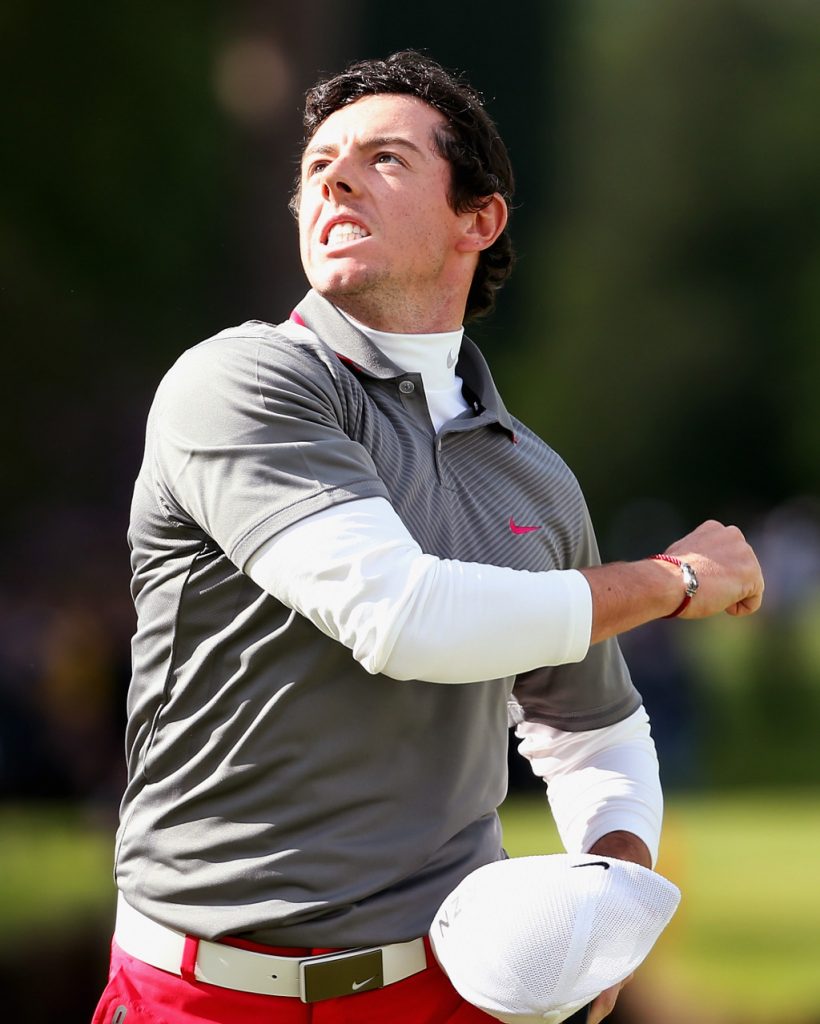 Arguably the most memorable moment from the last few decades at Wentworth was Rory McIlroy’s win in 2014. McIlroy, much like Simon Khan and Alexander Noren, went into the final round seemingly out of contention, seven shots off the lead after opening rounds of 68, 71 and 69.

Thomas Bjorn held a five-shot lead on -15 and looked to be a firm favorite to win the tournament heading into the final round.

However, Bjorn endured a torrid final day, shooting a three-over-par 75, allowing McIlroy to swoop in and clinch his maiden PGA Championship title courtesy of a superb final-round 66.