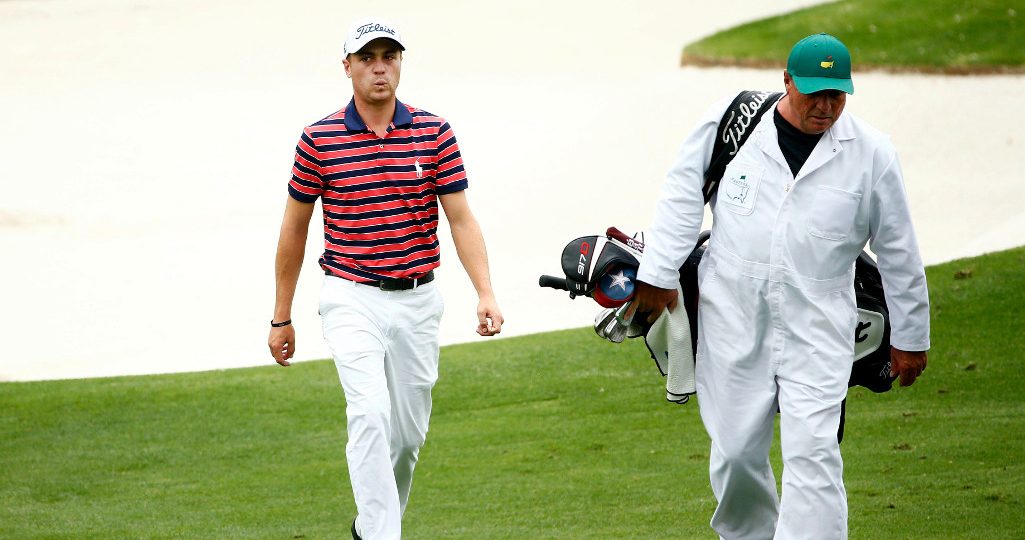 When perusing potential US Masters winners, past form at famed Augusta National is always high on a punter’s list.

A run through this year’s main contenders and it’s everywhere.

Rory McIlroy has had five straight top 10s and led by four shots after 54 holes in 2011.

Either side of falling downstairs and missing the 2017 event, Dustin Johnson has course form of 6-4-10.

Justin Rose is a two-time runner-up, Tiger Woods has won it four times, Rickie Fowler finished just one back last year, Jon Rahm took fourth in 2018 on just his second appearance and on it goes.

But how about the man ranked joint-third in the betting this year – Justin Thomas.

JT is already a major winner having landed the US PGA two years ago. He was second when defending it last summer and, to prove his prowess in majors on home American soil, he equalled the lowest ever round in a US Open (63) when cracking the top 10 at Erin Hills in 2017.

But what about his Masters record?

As an elite, big-hitting American with strong connections to the south, Thomas has the perfect profile for success at Augusta National and yet his three starts at the year’s first major have been somewhat underwhelming:

13 days until Masters Week.
Ben Wright and Henry Longhurst story the back-and-forth between @JackNicklaus and Tom Weiskopf during the 1975 Masters. #cominginapril pic.twitter.com/H6e4tfHmyt

The course is no pushover but just one lap in the 60s?!

However, it doesn’t need an advanced sequence spotter to note that Thomas is getting better year on year even though he hasn’t yet cracked the top 15.

So how about the numbers beneath those raw finishes – do they offer further encouragement that the 25-year-old from Kentucky has a green jacket in him sooner rather than later?

A short answer is yes.

Thomas was a little timid at first at Augusta National but he’s improved his Driving Distance ranking from 39th to 15th to 5th in his three visits.

More encouraging news comes when looking at the breakdown of his scoring on the tree-lined par 72 – in particular the Par 4s.

There was a notable improvement in 2017 when he was +5 while last year he played them in a combined even par.

While we often think that making birdies is the key at Augusta, past evidence says that limiting the damage is massively important. Again, Thomas is learning.

With just a couple of weeks to go until this year’s Masters, Thomas is ranked 2nd on the PGA Tour in Par 4 Birdie or Better leaders and 28th in Bogey Avoidance. In other words, his game is looking in ideal shape to thrive at Augusta.

Thomas, himself, has his own idea on what he has to do well.

“For me it’s always around the greens,” he said. “I think it is for anybody. You have to have such control of the ball, pitching and chipping and wedging, whether it’s spin direction or top spin, back spin and leaving it in the correct spot under the hole, and then you have to be able to make a lot of those short to mid-range putts.”

Hoping for more Sundays like yesterday! Nice way to end the week in 🇲🇽

His current Strokes Gained: Around The Green ranking? 10th.

Another reason to believe that Thomas can crack the code this time.

Beyond the science of numbers, there’s one more important reason why Thomas hasn’t yet shone at Augusta National.

“I’ve been very comfortable for three years now,” he said at Sawgrass two weeks ago. “I just haven’t played very well. I don’t think there’s many courses consistently that could fit my game much better.

“I think I honestly get too excited and too amped up and honestly over-prepared for it. I think I put too much effort into wanting to win the Masters or winning a major, whereas it’s just another tournament at the end of the day.

“There’s no reason for me to go in there, wear myself out before I even get there and prepare and just fry myself, and then come the weekend it’s hard to maintain that high level of playing, especially if I have it early in the week.

“I’m excited to go back there. I went last week and played a couple days, and there’s no place I enjoy more going to play a fun round of golf or any round of golf than Augusta, so I hopefully just have a lot more success over it.”

After a season so far of near misses – runner-up at the Genesis Open, third in Phoenix and Hawaii – just maybe Thomas is saving himself for the big one.

From what we’ve found out above, it really does seem that all his ducks are being lined up in a row.