Inside the 2017 Solheim Cup 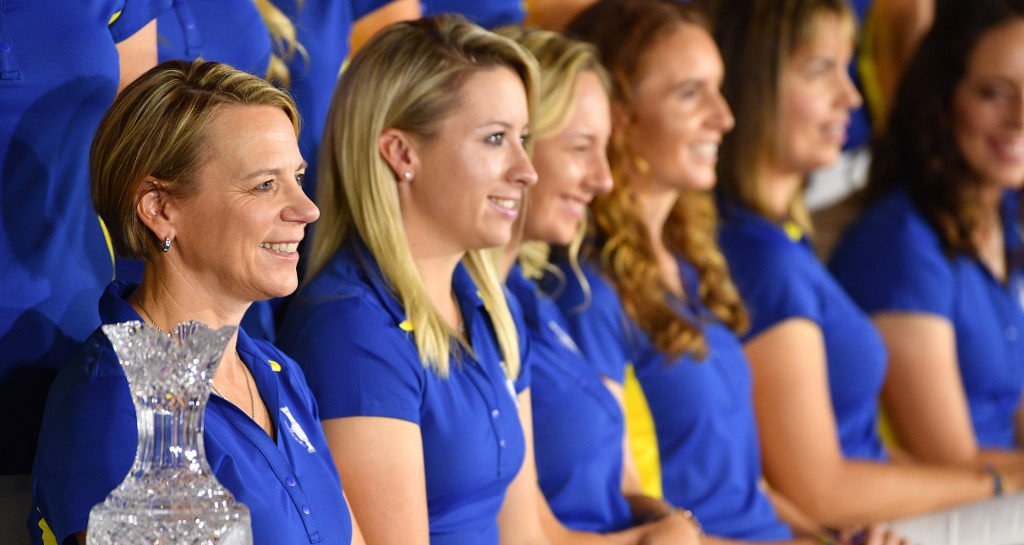 Matt Cooper looks ahead to the biennial contest, looking at the factors that will decide the fate of the trophy at Des Moines Golf & Country Club in Iowa.

Two years ago in Germany the Solheim Cup was dramatically reclaimed by Team USA just when they were on the brink of losing an unprecedented third match in a row. Their thrilling comeback in the Sunday singles rocked a European team that had been victorious in Ireland in 2011 and defended the trophy two years later in Colorado (a first win on away soil).

The week is expected to be loud and exuberant with over 120,000 tickets sold. Home crowds will massively outnumber the visitors, something the European team must be ready for.

We did wonder how those crowds would respond to Suzann Pettersen, whose actions two years ago so upset the American team, but her slipped disc means she steps down (replaced by Catriona Matthew) and becomes a vice-captain.

Don’t overlook her ability to stir the team in that capacity. Back in 2011 there was a late weather delay and when a handful of young Europeans headed out on to the course they were up against it. A quick pep talk from Pettersen and they were away, turning the tide of red, white and blue before claiming the win.

Other factors to consider this year…

True. They have more major winners (who have also been ranked top two in the world), but it’s also high time they transferred their quality to this event. Stacy Lewis has only four wins from 12 matches, Michelle Wie is a mere 7-7-1 through four appearances, and Lexi Thompson only just squeezes into profit at 3-2-2. Will they all come good at once? Or continue to underwhelm?

The veteran core of the American team is Solheim-strong

This might be flawed. Cristie Kerr has a reputation for being a cussed opponent and Paula Creamer for being the face-painted warrior queen of the Solheim. Yet whilst Kerr is brilliant at fourballs (10-5-1) she struggles in other formats (foursomes 2-4-2, singles 3-5-2). Creamer, meanwhile, was initially sensational in the match, but has tailed off. Prior to the singles in 2011 her record was a brilliant 11-2-5 (75%). Since dawn broke on that final day in 2011 she is 3-6-0 (33.3%).

It’s tough for Europe to win in America

The stats back this up. The Americans have won 9 matches to Europe’s 5, but it becomes 6-1 on American soil. One reason for this might be improved performance in front of home galleries. Wie’s record rises considerably Stateside to 69% point accumulation (from 50%). The two Brittanys up their game too. Lang is 5-6-3 everywhere and 4-1-2 at home; Lincicome’s gain is from 5-11-2 to 3-3-1.

There are four first-timers in this European team (Georgia Hall, Florentyna Parker, Emily Pedersen, Madelene Sagstrom). Too many, argue some, but there were six in the victorious side of 2013 so that suggests there is nothing to be afraid of. The flipside of that is that the six 2013 rookies averaged 58 LPGA starts each ahead of their debuts whilst this year’s quartet average just 8 apiece.

Both veterans of the match, their records make an interesting contrast. Pettersen has been dynamite in fourballs (8-2-1), excellent in foursomes (7-5-2), but poor in singles (1-4-3), Matthew is just below 50% in pairs (7-8-7) yet has always excelled on her own (5-1-1). Indeed, it was her 6&5 thrashing of Paula Creamer that turned the 2011 Solheim Cup in Europe’s favour and also reversed the American’s run of great match form.

70% is the benchmark of Solheim high quality

In the history of the match only six golfers have made more than one appearance and maintained a strike rate of more than 70%. Two of them compete this week. With a record of 6-2-0 Charley Hull leads all six with 75% whilst Carlota Ciganda ranks fifth with 4-1-2 (71.43%). Maintaining that form might be crucial for Europe’s cause.

Adapting to the course will matter

Both captains have dropped big hints that the course and the set-up has, and will, impact on their decisions. It begins with a driveable par-4 and there are five par-5s in the first 15 holes (this detail matters; the average length of a matchplay tie is 16 holes). Feedback from the players suggests that the captains have not overlooked this quirk; that they both believe length from the tee will matter – and the wildcard selections back this up.

How do the teams fare statistically? Europe has a very narrow edge on average driving distance. 7 players rank top 50, with 4 in the top 25; America has 6 top 50 and 4 top 25. In par-5 scoring average Europe has 6 ranked top 50 to America’s 8, but a gap emerges when you look at how many rank top 25: Europe’s 1 versus America’s 6.

Both American rookies, Austin Ernst and Angel Yin, gained Inkster’s wildcards and the latter is especially interesting. Just 18-years-old she was competing in the Junior Solheim Cup two years ago. She spent 2016 on the Ladies European Tour and her captain began to take notice of her claims when she made the quarter-finals of the Lorena Ochoa Match Play in May. It’s quite clear that the team adore her (and her goofy nature). A big-hitter who scores well on par-5s, she’s in a pod with Michelle Wie and Danielle Kang that might easily blossom.

The elephant in the room