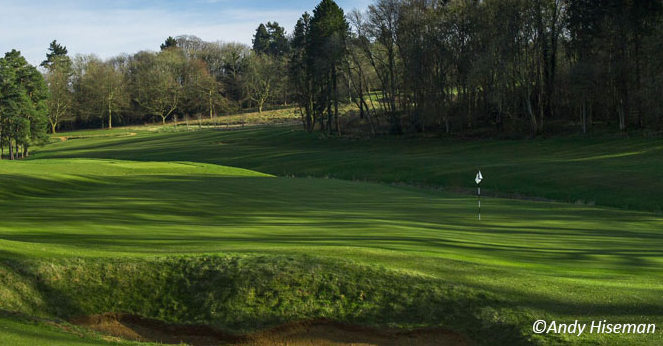 Deep in the heart of the English countryside – very nearly smack in the middle of the nation indeed – between Shakespeare’s Stratford-upon-Avon and Morse’s Oxford lies Heythrop Park.

Originally an 18th century country house, later a Jesuit college, it is now a hotel and golf club.

Make that “the hotels” because Heythrop Park is something of a novelty, boasting a DeVere hotel in the main building – originally built in 1710 – and a Crowne Plaza next door.

It’s an unusual arrangement but you soon get over it.

I was a guest in the DeVere section and had the pleasure of entering via the main house, feasting my eyes on the entrance hall and stairway, poking my nose into the grand room which hosts afternoon tea, with views over the gardens and the ha-ha.

I had an excellent three-course meal – including a superb duck pate starter – in the Terrace restaurant, overlooking the Italian gardens, and a late night gin and tonic wandering through the gardens themselves.

As relaxed preparation for the next morning’s golf it takes some beating.

The spa and grounds

It’s quite a welcome. Arriving by car you first drive through the small village of Church Enstone, a few miles south of Chipping Norton. Then you’re swept up a long avenue. Finally the road snakes round the property towards the main house.

I immediately wanted to see more of the 440 acres of the estate so I headed out for a run. I followed the signposted walk/run which will probably baffle anyone reliant on Satnav.

The flipside of being sent in all sorts of (often wrong) directions is that I took in the cascading waterfalls, the lily-covered ponds, the ancient bowling green, the hidden gardens and the classical bridges which dot the property. Around every corner and behind every tree there seemed to be another great view or unexpected find.

On a similar note the golf clubhouse, which also houses the spa, is quite a contrast to the hotel in being a notably squat and ugly building. A pity because it’s really quite nice inside, with a good sauna and steam room, and a lovely swimming pool.

There were times as I walked the course when I wondered if maybe I had accidentally wandered onto the location shoot for a made-for-TV American adaptation of an Agatha Christie novel.

That’s how quintessentially English the course is.

But that image also suggests a cheesy element, which would be a lie. Apart from the fact that there is a golf course running through the landscape it is wonderfully natural.

The layout takes in a Jesuit cemetery, views across golden fields to a church spire, ponds, lakes, historic bridges, more ponds, woods, waterfalls, an ancient orchard, an old skating lake, gladed valleys, the south avenue and, finally, up the 18th hole, the grand avenue, with the house beyond the green.

It needs pointing out that it is one heck of a long walk – the distance between some greens and tees is about as great as I’ve ever encountered – but the saving grace is that this course is about as picturesque as it is possible to be.

It’s also fun to play. In fact I bumped into two groups who were returning to Heythrop because they enjoyed the challenge.

It’s a course you can attack – architect Tom McKenzie has given you options. He’s also refrained from scattering bunkers in all directions. A good decision for the integrity of the estate’s heritage and a good decision from the perspective of not falling into the resort course (bunker) trap.

Smack bang in the middle of the Cotswolds, the charming English towns of Bourton-on-the-Water, Stow-on-the-Wold and Chipping Norton are close at hand. Warwick Castle and Stratford-upon-Avon are close by to the north, Blenheim Palace and Oxford nearby in the south.

Prices at Golfbreaks.com start at £99 per person for one night dinner, bed and breakfast, plus two rounds of golf.

Heythrop Park would make a really good stop for a group, who would love the spa facilities, a course that lesser golfers will enjoy visually and better golfers can attack, a clubhouse bar, two more bars in each of the hotels and a nice spot for dinner. It’s also great for couples, with a romantic location and plenty to see and do beyond the golf.

Head on over to our gallery section and see a selection of images from Matt’s trip.