Golf365’s guide to everything magical and mysterious about the Masters 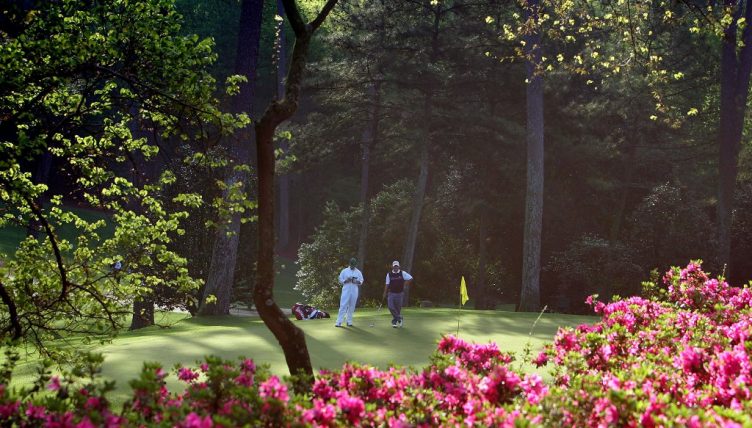 It’s often said that Augusta National, home of the Masters, is golf’s equivalent of Disneyland, but the likeness is not quite right.

A better parallel is with The Wizard of Oz, a film in which grey middle America is suddenly transformed by technicolor; which involves a fabled route to salvation, barely believable surroundings, a cast with exaggerated characteristics, odd traditions, a preoccupation with green and, most pertinently of all, everyone and everything micro-managed by a mysterious and creepy old man.

This other-worldly dynamic sets the Masters apart: the bizarre rules, contrived traditions and stilted behaviour. A place where visitors can suggest, with a completely straight face, that the bird song might be piped through speakers hidden high in the branches.

This is our A to Z of the madness of it all.

A is for “Anyone can win it”, the words which you will hear repeated on Saturday night and Sunday morning, a Masters mantra we’re not allowed to question and yet “A” also represents Art Wall Jr, the last man to win the tournament from outside the top ten with 18 holes to play. And when did that happen? In 1959.

B is for Butler Cabin, a building which represents the Masters in microcosm: the ritual is pure fiction, the fittings resemble the set of a daytime soap, and the reverence the cast bestow on it is mind-blowing.

C is for Champion’s Dinner, a sort of Rotary Club for very good golfers.

D is for dictator, or “benevolent dictator”, the words used to describe the reign (1934-76) of Clifford Roberts as Chairman of the Golf Club. “As long as I’m alive,” he said, “all the golfers will be white and all the caddies will be black.” The Chief-Weird-White-Man-Behind-the-Curtain-in-The-Wizard-of-Oz.

E is for eerie music, that plonking piano tune which accompanies television’s half hourly glance at the leaderboard. It’s slightly unsettling, with more a touch of funeral parlour muzak about it.

F is for food and drink which the Masters does better than any sporting event in the world, producing unique options at sensible prices. It’s entirely in keeping that the Golf Club is so smart about the concession stand and so strange about so much else.

G is for green. Not on this occasion “green jacket”, but “green grass” because Augusta’s glossy abundance of green is a genuine problem for the sport. It dupes hackers (and Presidents of the United States of America), who thereafter insist emerald is good and brown is bad. Not such a problem for wealthy country clubs, less good for the rest of the planet.

H is for Horton Smith, first winner of the Masters in 1934. His green jacket (awarded in 1949 when the tradition first started) was auctioned in 2013 for over $682,000, reputed to be the highest price ever paid for golfing memorabilia.

I is for ill-fitting green jacket, which is selected for the winner as he walks up the 18th fairway by someone who has a guess at his dimensions. They didn’t have one in Ian Woosnam’s size, the nearest they could come up with being the press officer’s.

J is for Jim Nantz, the high priest of Augusta National genuflection. Completely bonkers but he clearly loves it and it’s now an essential part of the week. Has the rapt piety of a slightly overwhelmed tourist in the Sistine Chapel.

K and L is for Kite and Littler (Tom and Gene), who share the greatest number of appearances at the tournament without winning (26).

M is for the mournful cry of the freight trains which regularly pass the course. A haunting sigh that drifts through the trees from the railroad. Rarely mentioned, but essentially Augusta.

N is for “No Running”, one of the edicts laid down by the Masters committee to the patrons. We occasionally get glimpses of the comedy results of this rule, but not, unfortunately, blanket coverage of the efforts of thousands of out-of-condition golf fans power-waddling to the best spots on the course armed with folded chairs and other golf-watching tat. If ever an activity was crying out for the red button it is this.

O is for oops and the phantom handshake –

Q is for qualified television coverage. Almost certainly a measure for the Committee to remind everyone who’s in charge, but the result might be no bad thing. Sport, in the all-consuming 21st century, has overlooked the heightened pleasure of delayed gratification.

R is for roars. Specifically the back nine roars on Sunday. Golf fans treat them like an endangered species. At the 1988 tournament Fuzzy Zoeller moaned: “You don’t hear the roars from the crowd at Augusta any more. It’s like a morgue.” In 1988! Only two years after what were probably the loudest roars the course ever witnessed. How loud do they have to be?!

S is for seven shots – the number of strokes Chris DiMarco and Tiger Woods finished clear of the field in 2005. Seven! Poor DiMarco was the equal of peak Woods through 72 holes, only the extra ones did for him. Surely one of the great major championship performances, lost in our (somewhat necessary) obsession with who wins.

T is for three. Specifically the par-three competition which has become golf’s version of somebody else’s children’s school nativity play. Amazing to be involved in, lovely to look at a few photos of (maybe even view a funny video clip from), but really hard work to sit through the entire thing.

U is for uniforms the caddies wear, white boiler suits which retain an echo of 1930s-era class and race divisions of labour.

V is for Verne Lundqvist, the US broadcaster responsible for the two great commentary lines: “Yes Sir!” when Jack Nicklaus drained his birdie putt on 17 in 1986 and then “In your life have you seen anything like that?” when Tiger Woods’ ball dropped in the hole at the 16th in 2005. Perhaps almost as brilliant as what Lundqvist *did* say in 2005 is what he *didn’t* say, specifically staying quiet as the ball hovered on the edge.

W is for Woosnam’s fist pump which greeted his victory in 1991. It was so fierce he pulled a muscle.

X is for X marks the spot – ever noticed how we see the course and the tournament from *exactly* the same locations every year? It’s a bit weird. It means that, paradoxically, although we know the course very well, we also don’t know it that well at all. Dave Tindall’s photo galleries really highlight this factor.

Z is for Zoeller (Fuzzy), the last debutant to win, who then reinvented himself when having an ugly pop at Tiger Woods’ menu ahead of the 1998 Rotary Club night.

Features Matt Cooper The 19th Hole The Majors The Masters