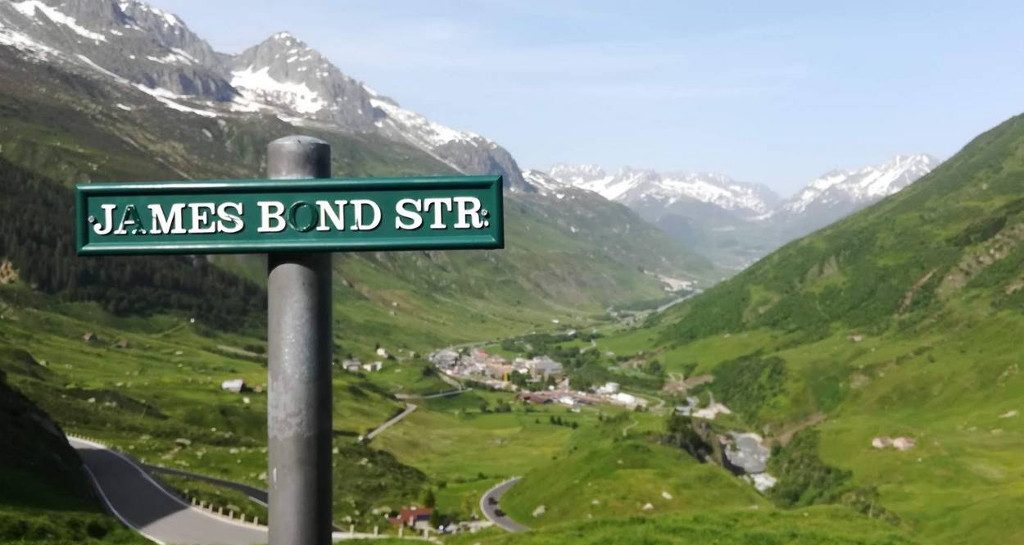 There are very few golf fans unaware of James Bond’s high stakes head-to-head against Goldfinger – if it is not the sport’s finest moment in cinema history, it’s definitely close.

In the novel the match took place at Royal St Marks GC (a thinly disguised Royal St Georges in Sandwich) whereas in the film it was filmed at Stoke Park GC.

It was a tense affair and possibly unique given that the finer points of golf’s labyrinthine rules are rarely vital to the plot of any movie.

It turns out, however, that we’ve all been blissfully ignorant of a wonderful golfing quirk – they could have had a re-match.

Remember the scene shortly after the golf when Tilly Masterson, seeking to avenge her sister, attempts to shoot Goldfinger and succeeds only in giving Bond a scare?

The backdrop is one of the most dramatic in all of Bond history, the scene filmed at the top of the twisting hairpin bends of the Furka Pass in Switzerland, and guess what? There’s a golf course just a few hundred yards away. 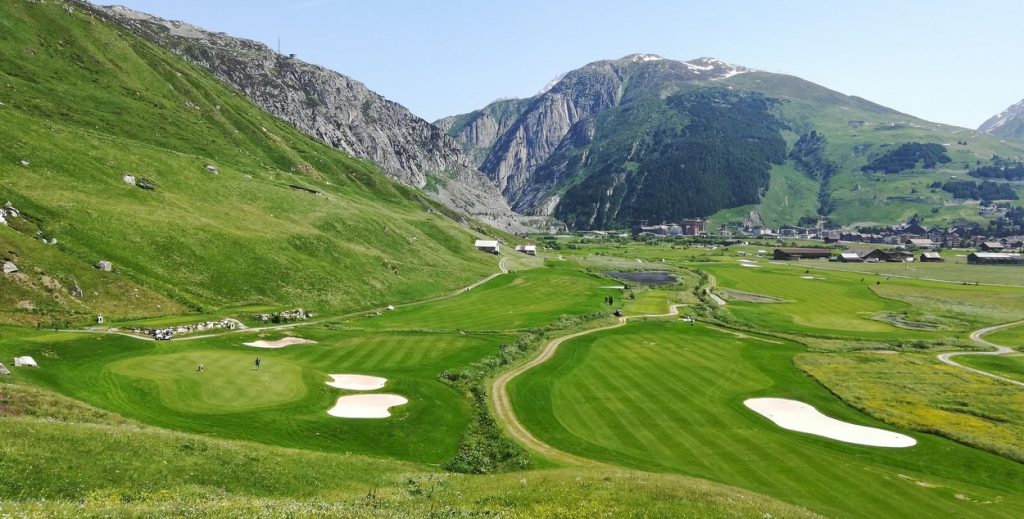 The south of Switzerland has always held something of a fascination with Britain’s greatest fictional heroes – some 70 years before Bond, Sherlock Holmes tussled with his arch enemy Moriarty at the top of Reichenbach Falls.

As I make my way from Zurich airport I ponder suggesting a detour to visit this famous scene, but the schedule for my trip is busy and before long I’m discovering that real life British heroes were also fond of my ultimate destination – the small town of Andermatt which, high in the Alps, is surrounded by mountains which stretch into the sky, passes which cling perilously to the slopes, and which is named after a large meadow that now boasts a golf course.

In the 19th century Queen Victoria came here, setting in motion the first wave of tourism to the region. Before the Second World War British skiers descended on the town, kickstarting the winter sports craze.

And now that golf course is a key component of Andermatt’s hope to create a third tourism boom for itself. 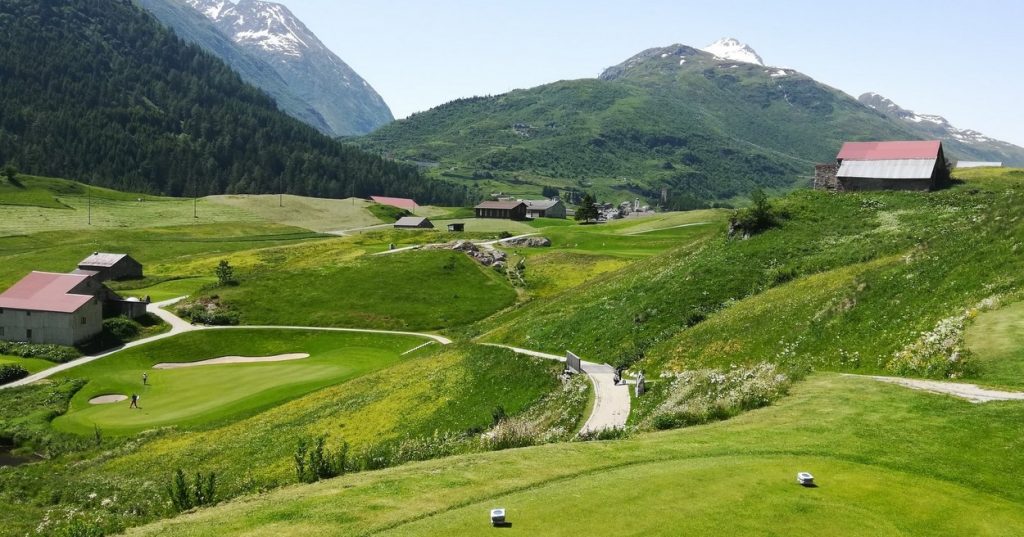 Andermatt might be a small town, but it packs a big punch. Bond famously fuelled his car in the town ahead of his exploits and it’s a neat metaphor for any travellers.

The old town is full of small bars and restaurants, huddled around a fast-running river, the ideal spot to recover after a day spent on the mountains. In winter the creation of SkiArena Andermatt-Sedrun has made this the largest and most up-to-date ski resort in Switzerland with a vast 120km network of chairlifts and gondola cableways to send skiers and snowboarders on their way.

In summer those passes are popular with cyclists and the mountain slopes turn into the perfect playground for hikers.

Meanwhile, on the outskirts of the town, there is a new complex which features the Radisson Blu Reussen hotel, the luxury Gotthard Residences, a new social hub at Piazza Gottardo and a community based around apartment blocks and chalets situated on the River Reuss.

Cross that river, head into the meadow, and you come across Andermatt’s latest summer attraction – the Swiss Alps Golf Course. 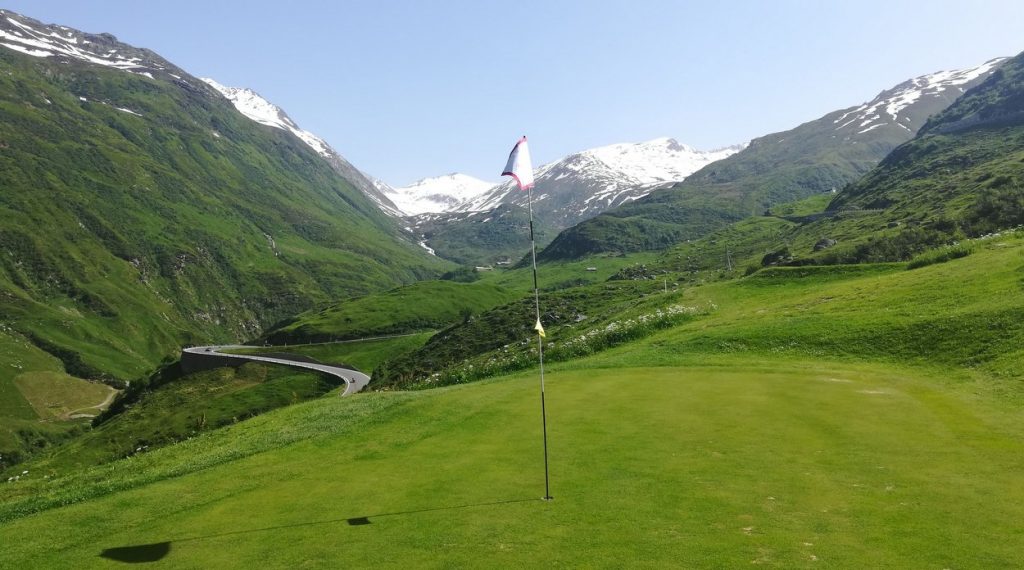 There are few thrills in golf quite like striking a ball in the Alps.

At 1,400 metres the ball soars into the thin air and flies that little bit further than normal; with a clear blue sky and crisp green grass you never miss its flight; the backdrop of snow-capped mountains makes you gasp; and the gurgle of glacial melt cascading down waterfalls and the tinkle of cowbells, prompts giggles at your good fortune.

We were up early, but it was worth it as I realised that I was completing an unlikely double.

Two years ago I played golf in the Himalayas, now I was high in the Alps. The former was a rough and ready operation, this was a very Swiss contrast – a beautifully presented course that belies it’s 2016 opening, as do the awards which have greeted its first three years in operation.

The first two holes cling to the base of the mountains which surround the meadow, the third, fourth and fifth climb it memorably and then the fifth descends from it with a sweep that is reminiscent of a black run.

It’s a tough stretch of golf which calls for careful selection of lines and a neat short game to atone for errors. Those fond of courses high in the Scottish and Welsh hills (and I am definitely in that camp) will be at home here.

For the rest of the front nine, and all but one holes on the back nine, the course stays down on the meadow, the holes crossed by streams which irrigate this flatbed, protecting it from the surplus water which descends from the awe-inspiring slopes.

It’s a fair test. High handicappers face threats, but none are hidden. Low handicappers can attack the course, using lines which offer plenty of risk and reward options.

The short-lived return to the slopes requires a big climb, but it is so worth it.

The 13th tee box is perched high above the green and requires a pure feel shot with altitude and the elevation drop playing havoc with yardages. 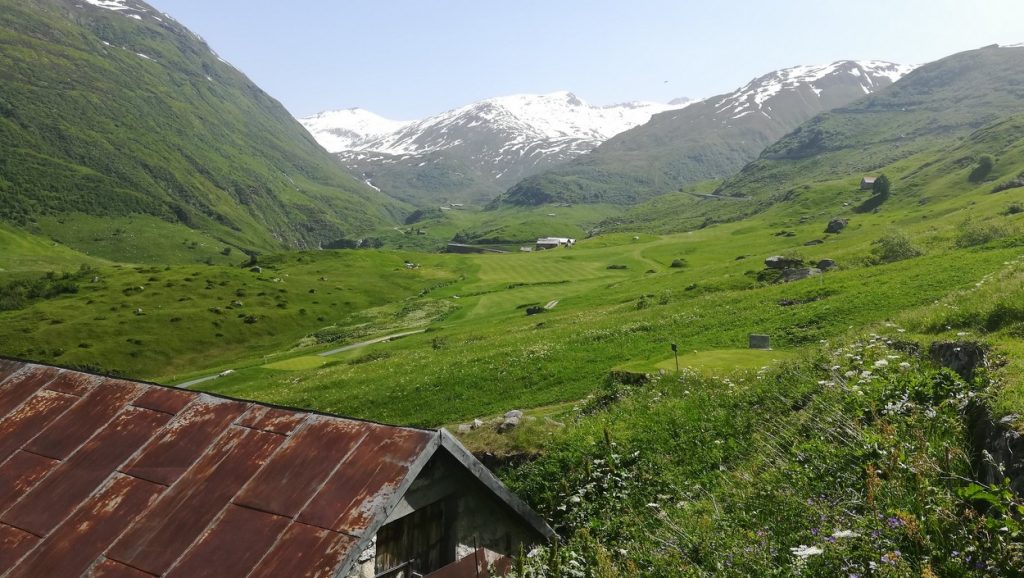 If Andermatt Swiss Alps GC is what modern golf design principles can bring to an Alpine location, our journey higher up the pass to Realp is the perfect contrast – a mind-bogglingly brilliant example of the sport being enjoyed in an unlikely spot.

We precede our round there with a drive up those hairpin bends, to the spot where Sean Connery was photographed for the Goldfinger promotional posters.

From the James Bond Strasse sign we peer down, past where Goldfinger and Oddjob parked, to a plot of land which hosts a remarkable nine holes.

How many times have you or a playing partner joked that a hole “goes straight up a mountain”?

Welcome to Realp Golf Club where holes to precisely that.

It’s a dizzying experience. Shots have to be fired at greens which you can barely believe exist, clinging to the side of slopes which plunge in all directions.

Fairways ribbon across valleys, skirt ravines and float across the top of perilous drops into rivers far below.

It’s golf – and exercise – like you have never seen before. A one-off golfing expedition that will leave you gulping for air and, hopefully, celebrating shots you’d never previously dreamt of hitting.

Ever thought yourself capable of driving through a par-four green over 320-yards from the tee box? Think no more – play the fourth at Realp. You can’t say this is downhill. It’s downmountain, in thin air; you’re getting 100 yards minimum on what you normally hit.

And when you wake next morning, half wondering if you dreamt the previous day’s golf, you can recover with a morning spent e-biking up the valleys and then a spell in the pool and spa at the Radisson.

Bond liked it in these Alpine mountains and he’d have liked it more nowadays. The old town retains a character he would have welcomed, the new town has the luxury he’d have lapped up – and the golf offers the chance to win the bounty from you partner.

Famously, Bond claimed his match when he revealed to Goldfinger that he had played the wrong ball. From the final tee at Realp, set on a narrow plot of land high above a steep drop, my opponent had an attack of acrophobia and took the ball as far back as he could.

Too far back, as it happens, and I could have claimed the match. But we were playing for honour, not gold bullion. This was not a day for nit-picking, but a golfing day to celebrate.

For more information about Andermatt and Andermatt Swiss Alps GC follow the links below. In addition to the Radisson Blu Reussen and Gotthard Residences, the Chedi Andermatt is a five star hotel in the old town. Golf breaks are available at all three and in the near future a golf hotel will be built.