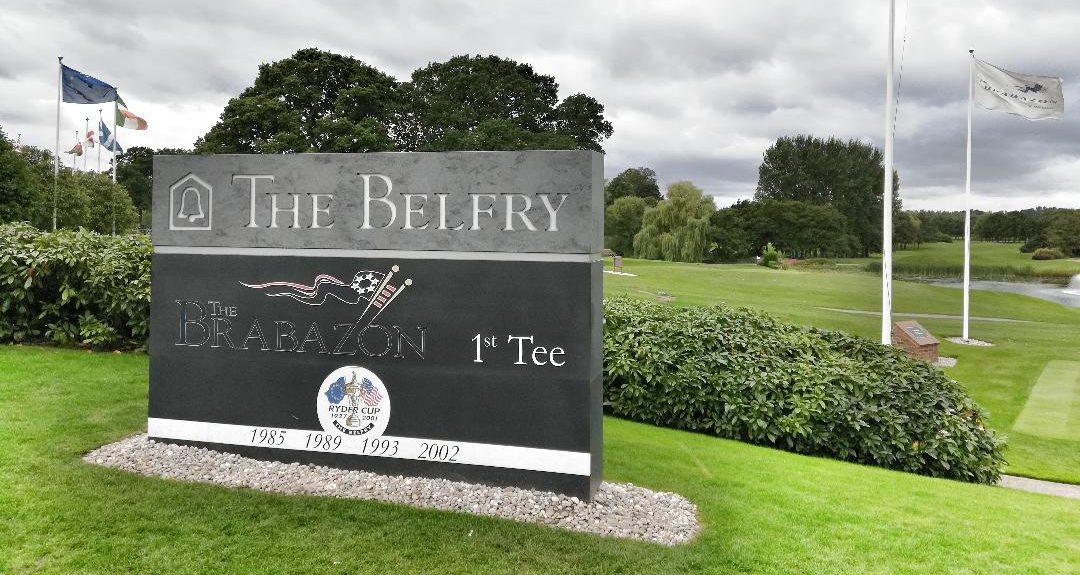 Matt Cooper enjoyed a blast from the past when he returned to The Belfry Hotel & Resort, host of no less than four epic Ryder Cup matches.

There is little that Ian Poulter and I have in common. He is ambitious and driven; I am lazy and content. He owns lots of cars; I like the train. He loves football, I read books.

But in September 1993 we shared the same formative experience: we attended our first Ryder Cup.

I would imagine that the inspiration for Poulter and his friends was very similar to that of myself and my friends: we had watched the previous matches and then re-watched them on worn, fuzzy VHS tape recordings. Because of that our alarms were set for 3 a.m. (we recalled long lines of traffic and Peter Alliss cooing: “The dawn patrol”).

Initially, however, our experience was a little disappointing. Thick fog had descended over the West Midlands that Friday morning so play was delayed and, far from being part of an eager scrum of fans, we appeared to be the only people who hadn’t watched the previous evening’s weather forecast.

Furthermore watching the foursomes was something of a let-down. This was the first time any of us had attended a golf tournament and the difficulty of seeing any action was something none of us had taken into account (a complication the Ryder Cup always enhances).

Before the afternoon fourballs we agonised over the prospect of paying £10 to buy a cardboard periscope to improve matters and eventually coughed up, at which point the Belfry became everything we had hoped it would be, all that we had been thinking and dreaming of for the previous eight years.

At one stage I fist-pumped and cheered a winning putt with a stranger who it slowly dawned on me was England fast bowler Gladstone Small. Late in the day we ran along the fairways watching Nick Faldo claw his fourball back to parity before bad light caused play to be halted on the 18th tee, news we learned from earwigging BBC radio commentator Ron Jones, who was crouched in front of us.

It is impossible to have fallen in love with golf in the 1980s and not consider the Belfry somewhere special. It’s popular to pick at the resort’s reputation these days, but for some of us that’s like trying to poo-poo Action Man, Subbuteo or Scalextric.

So when asked if I wanted to play there ahead of the 2018 match it didn’t take long to answer: “Yes.”

2002: Rookies Paul McGinley, Pierre Fulke and Phillip Price have breakfast together. “One of us is going to be a hero today,” says McGinley.

2018: “That IPA last night was quite strong,” I say, tucking into a Full English. In contrast to the Irishman’s, they are words which hold limited motivational value.

2002: The match is tied at eight points apiece. American captain Curtis Strange backloads his single roster, Europe’s Sam Torrance does the opposite: he sends Colin Montgomerie out first. The Scot stomps to the first tee, chest out, the roars of the galleries adding to his sense of feeling wanted. He smooths a 3-wood down the middle of the fairway, wedges close, holes the putt, a ridiculous look spreads across his chops, he goes one-up, wins 5&4, sets the tone of the day, job done.

2018: Driver, 5-iron to just short of the green for me. After that, don’t ask. I hit decent shots, but I’m fooled by my first encounter with the silky smooth and very quick greens. Not quite Monty, but we’re away.

1985: It is not only the golf, but the names of the U.S. players which fascinate me. Fuzzy Zoeller, Calvin Peete, Curtis Strange, Hubert Green – bewilderingly exotic. There is a brilliant approach to the ninth hole played by a man called Tom Kite. I am convinced the commentator is making these names up.

2018: My game has many faults, but pride is not one of them. I hit the fairway with my drive, lay up short of the water and prepare to hit wedge in. Suddenly I remember Tom Kite. Instinctively my mouth replicates his funny grin. I then play a perfect three-quarter wedge, one hop, stop, to six feet. Miss the putt (lightning fast downhill), but still, thanks Tom.

1985 and 1989: The tenth tee – Seve thrashes his ball onto the green, Ollie does the same, ecstatic cries and cheers. The inside pages of my school books are covered with maps of the tenth hole and diagrams of the shots my heroes hit there.

2018: A lay up into a bunker from the tee. Play like your heroes, kids. Be inspired.

1993: The back of the 11th green – Seve holes his putt, turns imperiously and strides towards the next tee. I am in A1 position. As he walks past I squeak: “Muy bien, Seve!” For one second his dark eyes looks straight into mine, they really do, and in that halting English accent he says: “Thank you very much.” I swoon.

2018: Miss the fairway on the right, approach finds sand through the trees, stick it to two feet, hole for par. Who says I can’t play like Seve? Thank you very much, the paella’s on me.

2002: Phillip Price versus Philip Mickelson. Lamb to the slaughter? Not this Welsh lamb, not this day, not this Ryder Cup. 16th green, lengthy putt, across the green, drops, carnage, so pumped he wanders round the green twitching his mouth and snorting his nostrils, less like a lamb than a randy bull. Seconds later Mickelson misses, Price completes the win.

2018: First cut, lay up, wedge catches the slope and slides off the green, but I putt it. Amazing. It drops. Half-hearted Phillip Price impression.

1989: The 18th tee. Americans keep driving the ball into the lake. Every time they do I run to the window and shout: “Dad, another one in the water!” Dad smiles, puts his thumbs up and then returns to his DIY. Payne Stewart tries to chop his ball out, fails, says “I’m gonna give this one more try” and to this day, if my ball finds water, I repeat those words in an American accent.

2018: The great thing about golf is that you have the chance to stand on the same stage as your heroes, the golden opportunity to compare yet another lay up, a near-shank into the greenside bunker and a failed sand save with what they achieved.

Another thing about this. Christy O'Connor Jr was 41 when he hit that shot. FORTY ONE! When I was a kid I thought of him as a kindly granddad figure. But he was younger then than I am now. Crushing. pic.twitter.com/L5wZFMP8wg

2002 and 1985: Paul McGinley’s breakfast prediction comes true. He stands over a ten foot putt to win the Ryder Cup and drains it. 17 years earlier Craig Stadler missed a tiddler on the 18th to end Saturday’s morning session. With it the tide of the match turned. With it Europe’s renaissance began. With it the Ryder Cup was transformed from a mismatch into a global enterprise.

2018: My partner Mike has a ten foot putt to win the match. “Like McGinley,” he says before gunning it. He then misses the return putt. “Like Stadler,” I remind him.

Then (1985 when just a kid): it struck me as a bit weird that a major sporting event should take place in the West Midlands. Now: in rather more realistic fashion, I find it a joy that I can reach a well-known golf destination in less than three hours (I’m not being entirely selfish; because of its location next to motorways going north, south, east and west it’s the same for many golfers).

Then (2008 when it last hosted the European Tour): the hotel was dated. Now: after a superb renovation the resort has three restaurants, a spa, swimming pool and the excellent Brabazon Bar, the ideal spot to end the evening in.

Then (1985): the course was wide open. Now: it’s effectively a tree-lined venue.

Then: memories. Now: the perfect place to relive them.

Winter Golf Breaks at The Belfry: enjoy an overnight stay in a standard double or twin room, Full English breakfast and 18 holes on the Brabazon course from £139 per person (valid from 19th October 2018 – 31at March 2019).