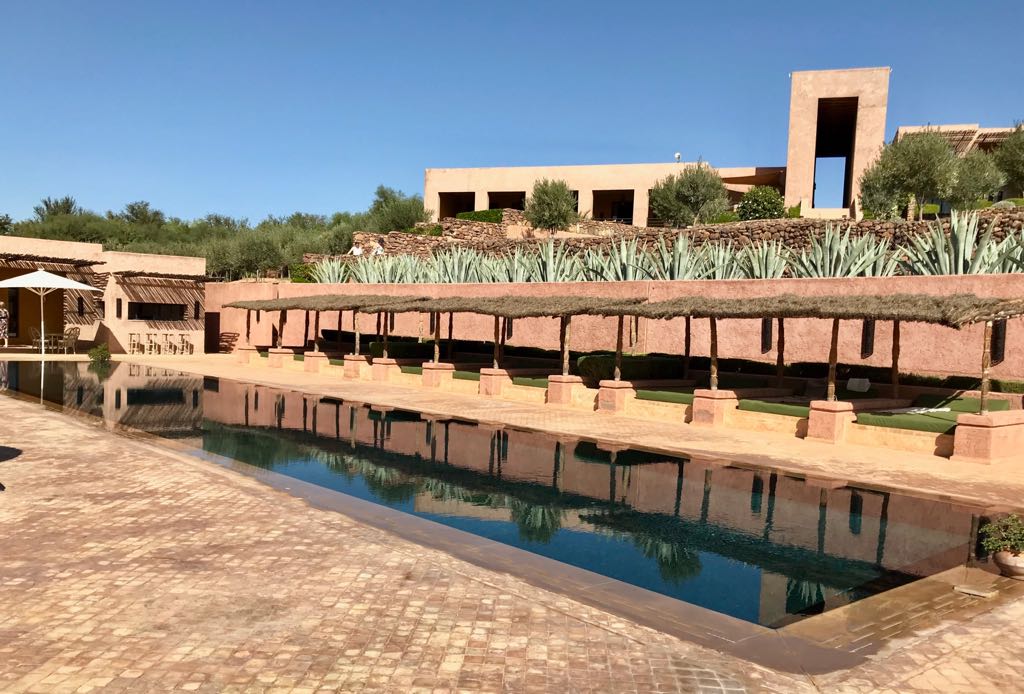 With the European Tour in Morocco this week, Dave Tindall heads to Marrakech and is amazed by the top-class golf on offer to the UK visitor.

It’s mid-afternoon in Marrakech and I’m stood on the 8th tee at Noria Golf Club.

I’ve had to hit over water to a green plenty of times on par 3s before but the visuals in front of me this time are unique. Everything is parallel lines.

The water I have to clear and the green in the distance are both rectangular. We’re so used to sweeping curves and undulations on golf courses that this frank, defined, brutally straight landscape is hard to process. My senses are thrown a little.

In theory, it should help get my alignment correct but, not wanting to splash my round ball into the reflecting rectangular reservoir, I go all diagonal and bail out to the right of the green. A chip and two putts later and I’m happy enough to take a bogey. 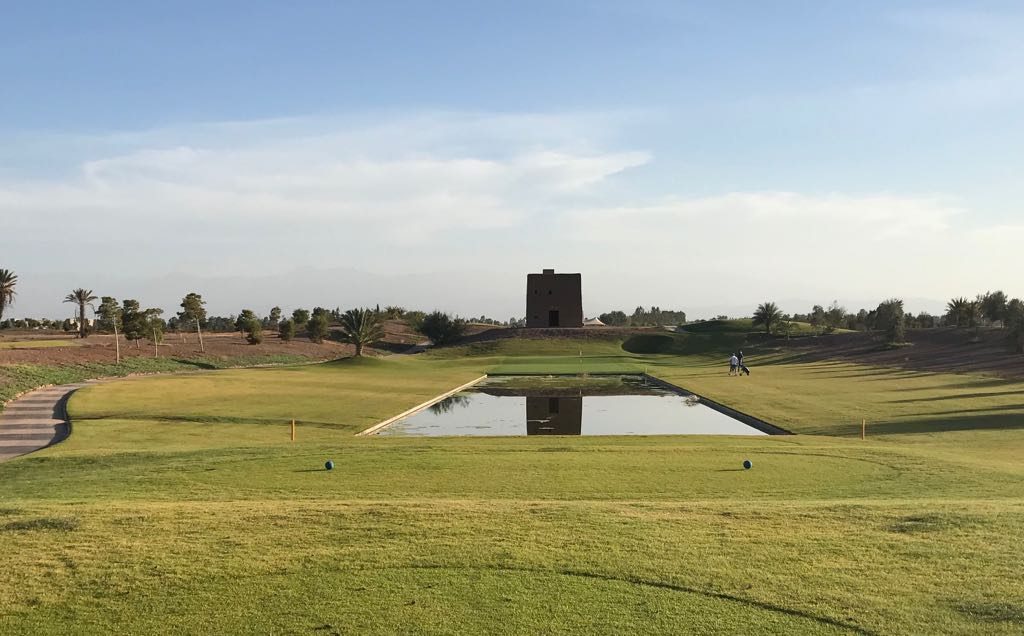 At the back of the green is a Moroccan Bell tower which again deals in oblongs and straight lines. Curious, I climb its steps and am afforded another fascinating view.

This time as I look away into the distance, I see a long traditional water basin which splits the 9th and 18th holes and runs all the way to the parallel greens in front of a two-tiered modern clubhouse inspired by classic Moroccan architecture.

Again, the putting surfaces suggest a game of crown green bowls is about to break out but, after a poor tee-shot, I hit a nice eight-iron to this well-manicured, receptive rectangle with my third and sign for another two-putt for bogey.

“The vision for Noria was to create a traditional Moroccan village that celebrated the architecture and landscapes of the South of Morocco,” says designer Steve Forrest on the club’s website. “These landscapes include mountains, fields, desert, oasis, orchards, villages and palaces.” 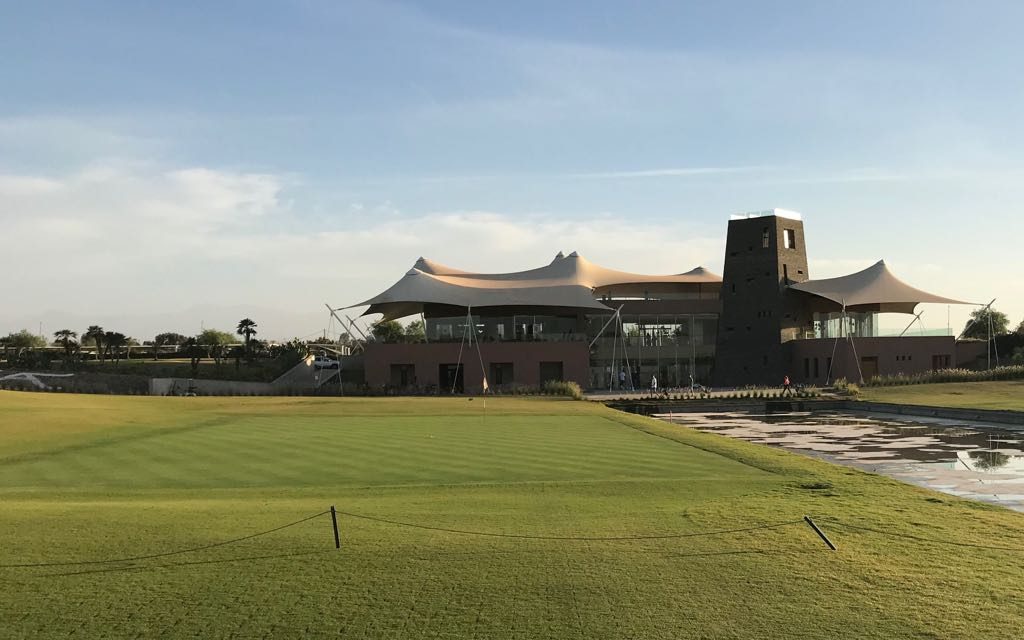 With five teeing options on each hole, you can tailor the test to suit your ability and if you’ve headed to Morocco to experience something unusual, Noria should be definitely be high on the list.

As you’ll have noted above, I was already nearly halfway through my round when basking in the mid-afternoon 25-degree sunshine at Noria.

That’s because flight time to Marrakech is under three-and-a-half hours. Take an early plane from Stansted to the very modern Marrakech airport and you’ll be having those “I can’t believe I’m here in Africa and it’s not even lunchtime” conversations.

The even better news for golfers is that Marrakech’s burst of new, plush courses – now into double figures – are all situated very close to the airport.

Hop off the plane, go through customs and take the straight and seemingly unending road stretching south. Motorcycles outnumber cars, the terrain is sparse and not much seems to be going on.

But turn off and, unexpectedly, you’ll find a plethora of top-class golf courses. Their proximity to each other means it’s ideal to play a bunch of them on the same trip. All you need is somewhere to stay.

Drive a little further down the same long road and you’ll find another treat – one that acts as a perfect base for golf. The Palais Paysans is a boutique hotel with 18 rooms that all have private terraces and gardens overlooking the stunning Atlas Mountains.

With a swimming pool, jacuzzi, massage and spa treatment, it’s a perfect location to relax. 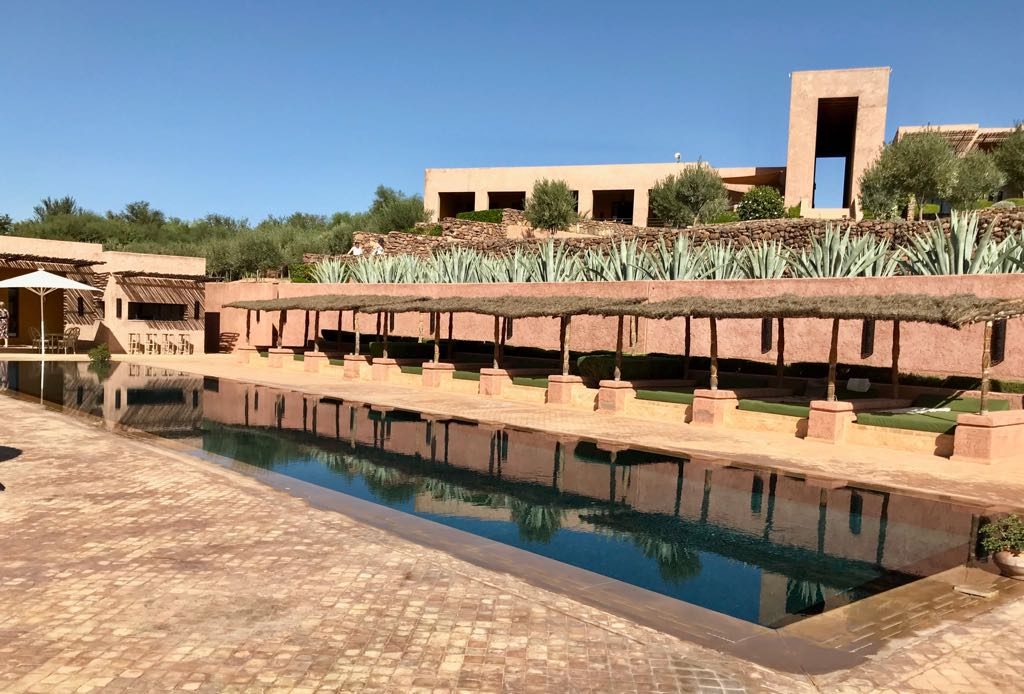 It can sound like a cliché, but the staff are incredibly welcoming and nothing is too much.

Two examples: 1) I inevitably forget something on a foreign trip and this time it was a continental adaptor plug. No problem, a knock at the door five minutes later and I was given one to keep for the rest of my stay. 2) I also left my golf shoes at one of the courses but, as if by magic, they were waiting behind reception the following morning.

Add in some superb food and drinks in the restaurant whilst looking out at the stunning scenery and, yep, we’re in “aaah, bliss” territory.

To get there, your driver negotiates a narrow track which winds through a traditional Berber village.

I loved making this journey and getting to know the little bits of road where the people carrier had to virtually come to a stop to negotiate the harshest bumps.

To see life being lived this way is in your mind’s eye due to scenes from news clips or documentaries but to witness it first-hand is fascinating.

After the unique test at Noria, I made the Jack Nicklaus-designed Samanah Golf Club the second course on my trip.

It has the familiar generous fairways we associate with Nicklaus designs while the greens are a true test.

Overall, the course was in excellent condition, had the added elements of water features and vast bunkers while five tees were again an option (I chose the middle yellows, making it a still testing 6,662 yards).

I joined up with a member (a Swiss guy called Andreas) and even had my own caddie (a common practice here) but despite their advice I was three-putting all over the place on these slick greens. 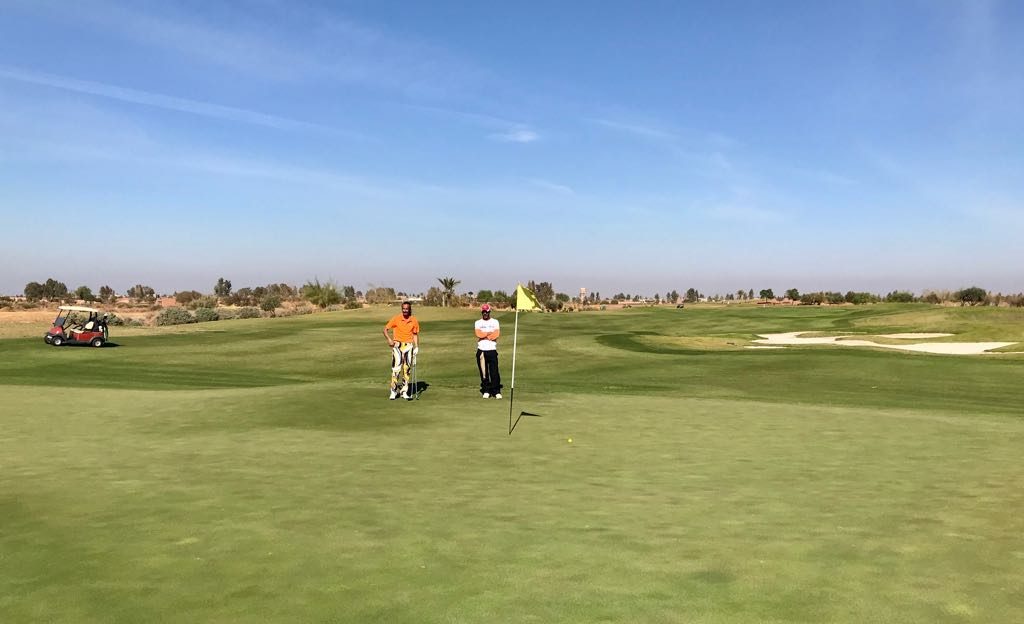 Not that it spoiled another hugely enjoyable morning’s golf which had started by hitting pyramids of balls (free of charge) on the practice range and watching a bit of day three of the DP World Tour Championship in the luxurious clubhouse.

Again, the weather was perfect (26 degrees and a very light wind) and Marrakech, for UK golfers, is basically an excellent golfing destination for nearly nine months of the year (temperatures in June, July and August will be too oppressive).

Andreas had played lots of golf in Marrakech where he’s lived for many years and e-mailed me a couple of days later to tell me his own favourite courses in the region.

Noria didn’t even make his top five so I feel a return visit is in order soon to test these other layouts.

Thirty minutes ago I’d been whizzing back to the clubhouse on a golf cart.

Now, I’m sat next to Mustafa from the Palais Paysan as he drives me through Marrakech. It’s chaotic but massively enjoyable. Mopeds buzz past from all angles, tourist buses inch forward and, at one point, a fire engine is blocked by a pair of cart-pulling mules. Or is it the other way round. I simply can’t tell.

Finding a parking spot seems impossible but somehow Mustafa pulls up near a garage following a lively conversation with the owner.

We hop out and a mystery man in local costume shakes my hand and guides us through the souks – Marrakech’s winding maze of market streets. Who is he? I feel like I’m in a 60s Bond movie.

After a superb lunch at the Riad Talaa 12 (bang in the middle of the city and yet an oasis of tranquillity when sat up on the high terrace), I head back out to the souks and try my bartering skills. 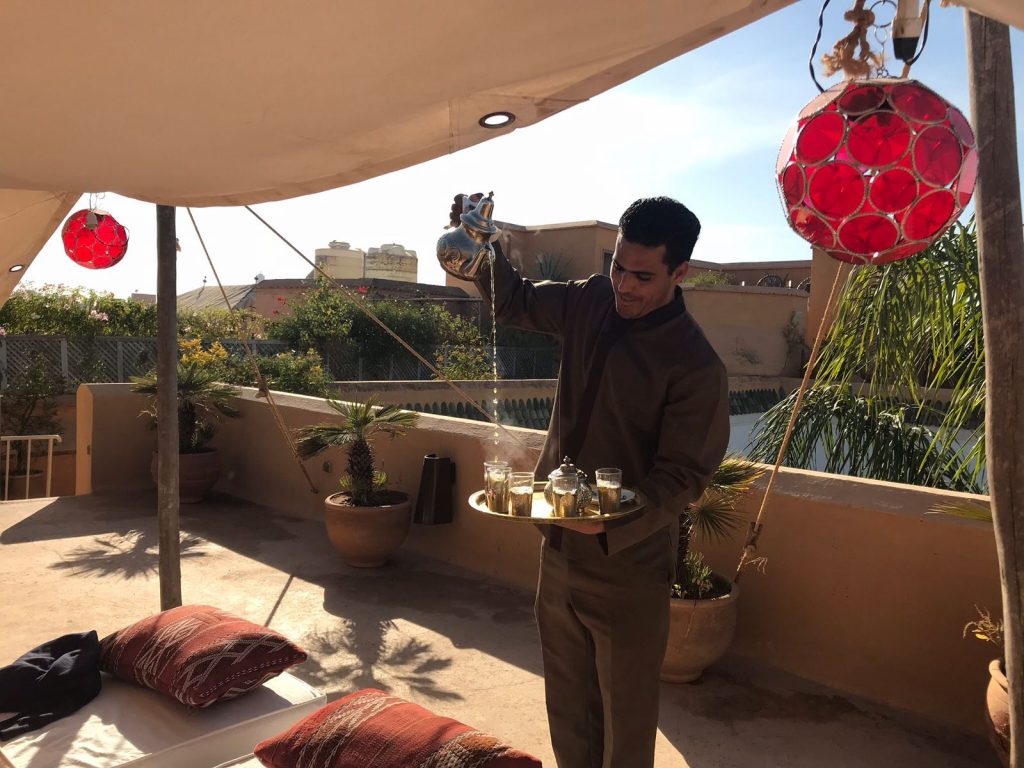 I successfully purchase a ring for my daughter and Coutinho No.10 Liverpool away kit for my son, both at 50% of the initial asking fee. I walk away thinking I’ve got a bargain, the shopkeepers are probably smirking and everyone’s happy.

Before heading to Morocco, a couple of folk with a hazy sense of geography and somewhat lazy views had called me brave for going to this part of the world. I felt none of that.

Sure, you’re on your guard as you would be in any foreign country or big city but there have been no incidents in Morocco since 2011. Somewhat different to London and Paris of course and no-one would class me as brave for going there.

Instead, I’m taken by the friendliness of everyone. It was 4pm when I was exploring the city and, with Morocco being on exactly the same time as the UK, it meant the second-halves of that day’s Premier League matches were kicking off.

I could see lots of fellas working in shops swishing away on mobile phones and presumed they’d be checking footie scores rather than doing stock checks. I was right. “Football? Liverpool score?” I asked and everyone was delighted to regale me with the latest from Anfield.

As it happened Mo Salah had put the Reds 2-0 up on Southampton so they seemed particular pleased to let me know that a North African was the hero, even if Egypt and Morocco are big footballing rivals.

After a much-needed drink of freshly squeezed fruit from one of the market stalls, it’s time to head back to the Palais Paysans for more excellent food and a few refreshers.

Two nights, two golf courses. I could quite happily have turned that into five nights and five courses or seven nights and seven courses given the standard of accommodation and golfing terrain. 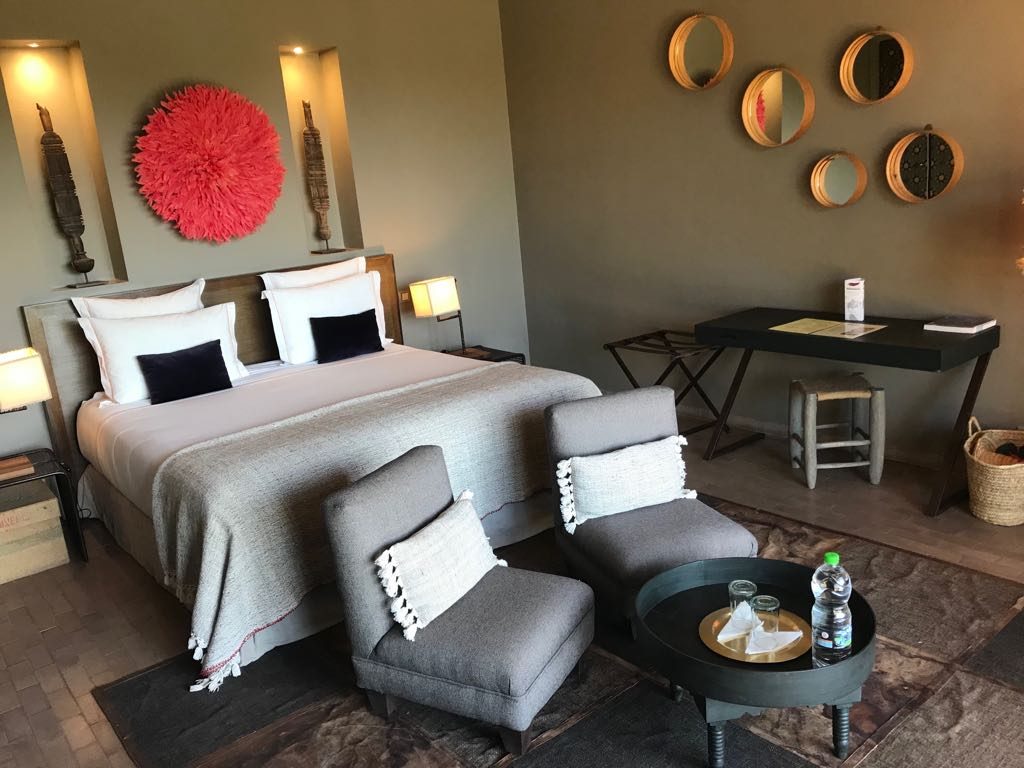 Thankfully, the Palais Paysans is now offering those sorts of deals to golfers as you can see at the bottom of the article.

The fact that the European Tour visits Morocco every year means I do associate the country with golf.

But, until this trip, that didn’t extend to playing there myself.

Realising how near it is and seeing how many superb courses there are in a concentrated area was a complete shock to be honest. I just had no idea.

Marrakech. Previously a place I knew only from a Crosby, Stills & Nash song.

I leave there thinking of it a definite golfing and holiday destination.

Rate per person with half board in a deluxe double room, min stay 4 nights: