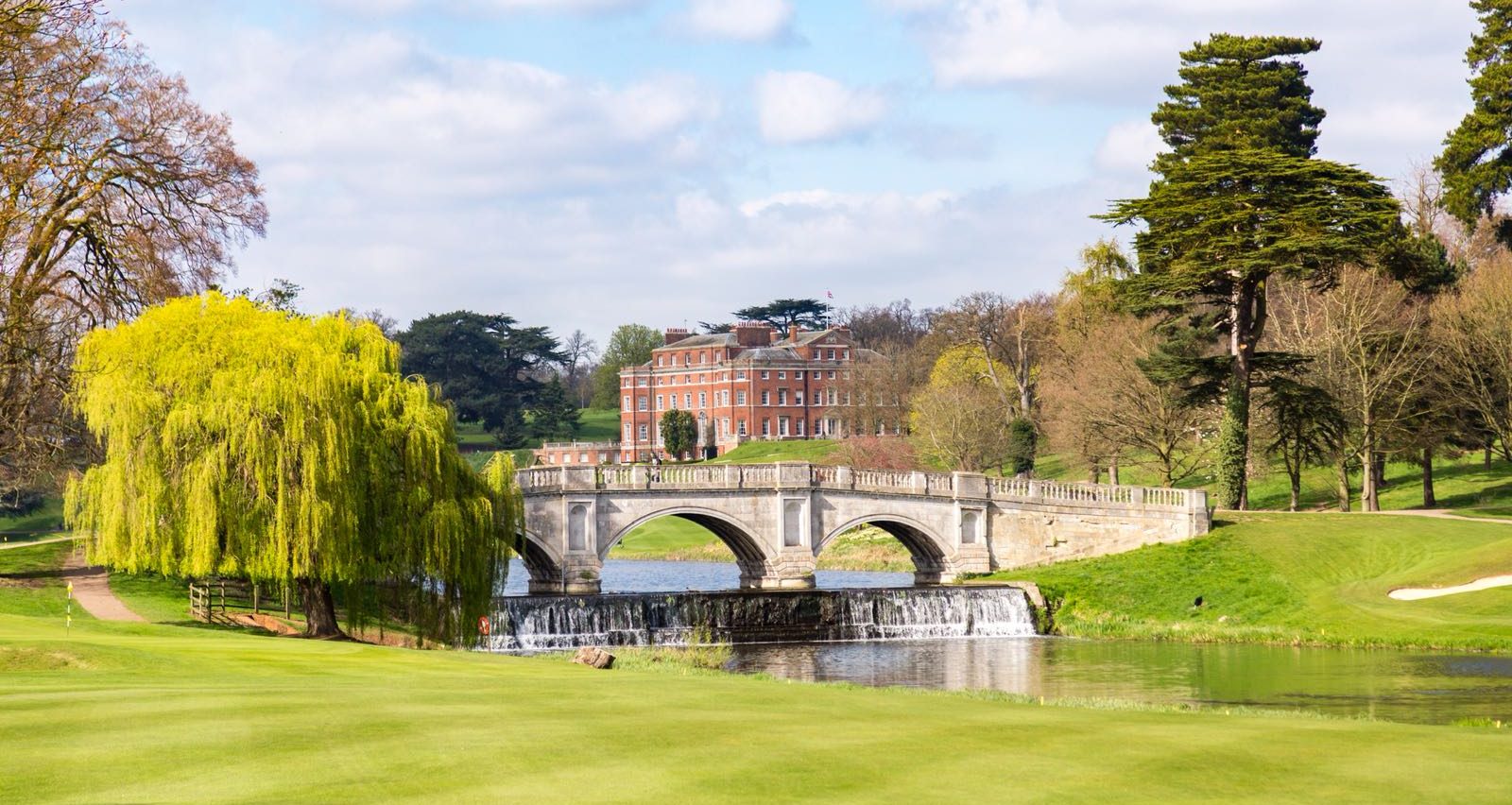 When you drive into the grounds of Brocket Hall, it’s immediately apparent that this is a very special piece of property.

Some pre-visit research had sewn the seed. It was once home to two Prime Ministers and also a favourite country retreat of Queen Victoria.

History echoes everywhere and if, like me, you weren’t fully aware of the antics of Lord Byron, I’d advise you give the flamboyant rogue a google. Famous for much more than his poetry, it was here that he conducted an infamous affair with Lady Caroline Lamb, who later summed him up in the phrase “mad, bad, and dangerous to know.”

Each has a hole named after them on the Melbourne Course (more of which later). 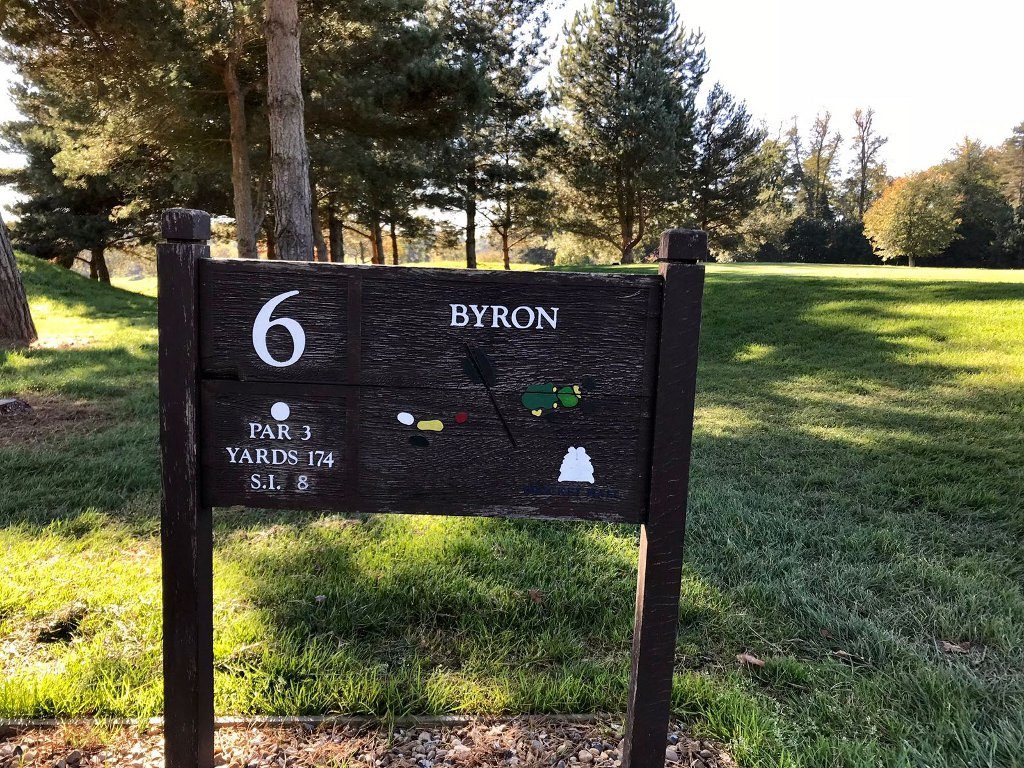 Brocket Hall’s location – just 20 miles from London – is a huge attraction and one trick for those based in the capital is to head here early while the roads are calmer, have breakfast, play 18 holes and set off back before the London rush hour traffic really kicks in.

I’ve come from the north but, as it’s straight off the A1, finding Brockett Hall is easy.

The contrast is also striking. Literally five minutes ago I was part of a wave of noisy traffic heading south. Now, I’m stood here drinking in the tranquility, admiring the beautiful sweeping vistas, historic buildings and mighty 500-year-old trees. 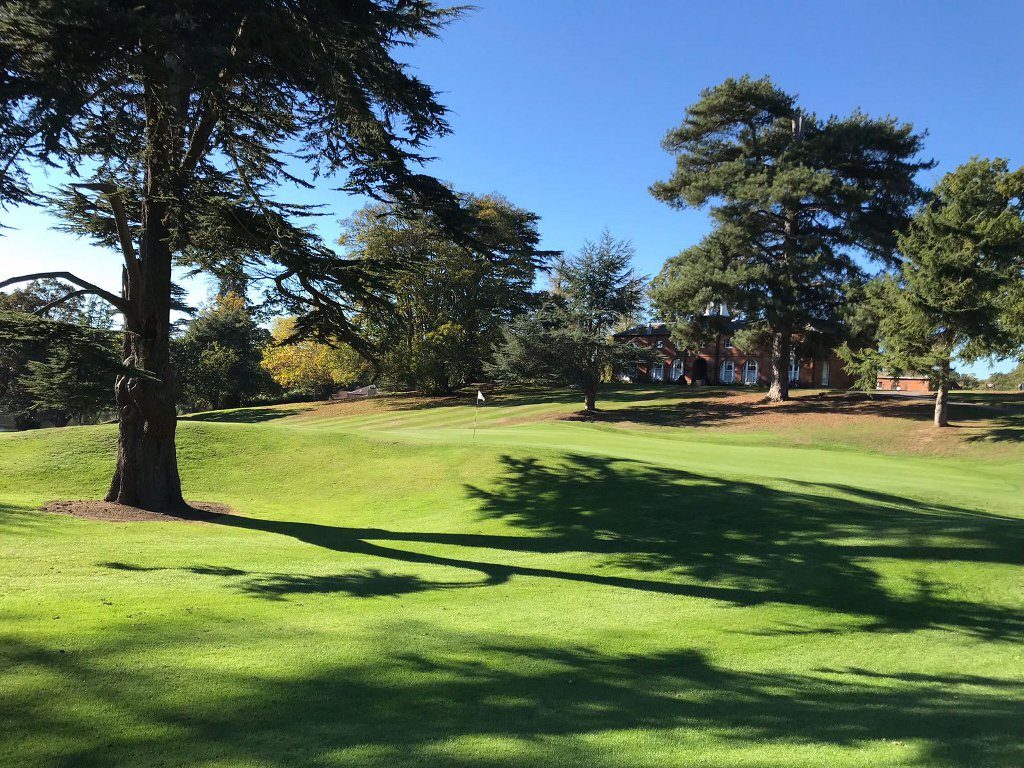 The peace is refreshing as birds gently chirp away. I can focus on tweets of the feathered rather than social media variety.

It’s an “aaah, bliss” moment and I haven’t even got the golf clubs out yet.

But, as much as I’m enjoying the history and serenity, I’m feeling more Byron Nelson than Lord Byron now. It’s time to see some golf holes and I have two superb choices. 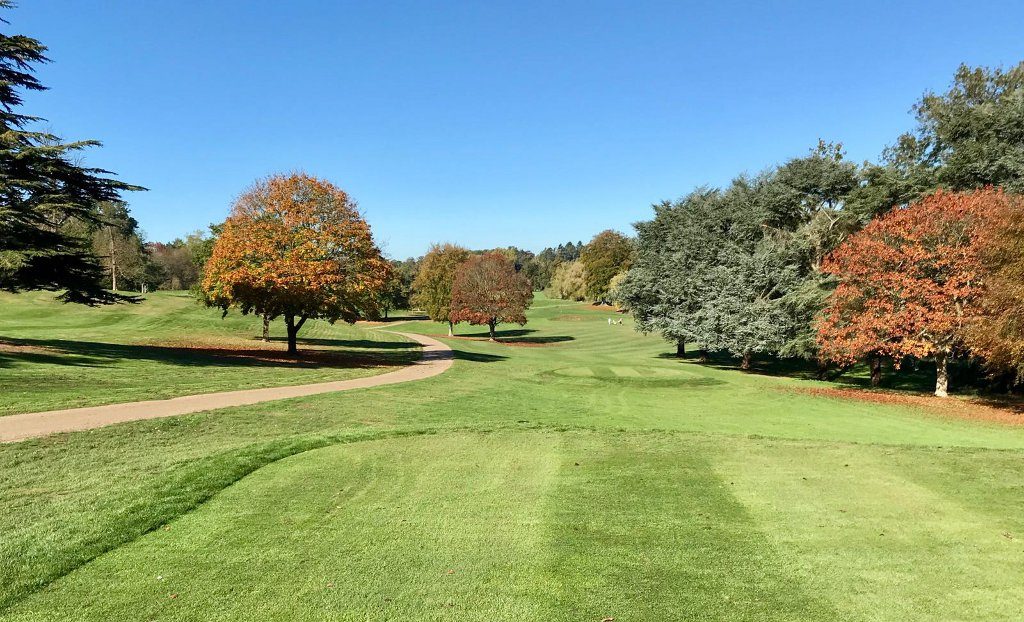 Opened in 1992, the par 72 is the design work of BBC golf commentating legend Peter Alliss and sidekick Clive Clark. It follows the natural contours of the Estate and four holes are played across the River Lea. Although I end up needing diving equipment on one of them (the par-4 4th), I hit my best shot of the day to 18, a six-iron which sails over the water and plonks down, pin-high about 20 feet away. What’s more, to cross the blue stuff and get to the other side, you press a red button and are taken there on a little ferry. Of course, I three-putt and that’s the story of the round. After spending my last few 18s playing on slow, bumpy greens or, on occasion, the dreaded temporary ones, the putting surfaces on the Melbourne catch me out. They’re in superb condition, beautifully manicured and running fast. Members get them this way 12 months of the year and will naturally adjust but if I don’t three-putt, I four-putt! Still, that doesn’t detract from a wonderful few hours. This isn’t a good walk spoiled, it’s a good walk enhanced. The Melbourne is tough but hugely enjoyable with its variety of holes. Fairly generous off the tee but your short game needs to be sharp. 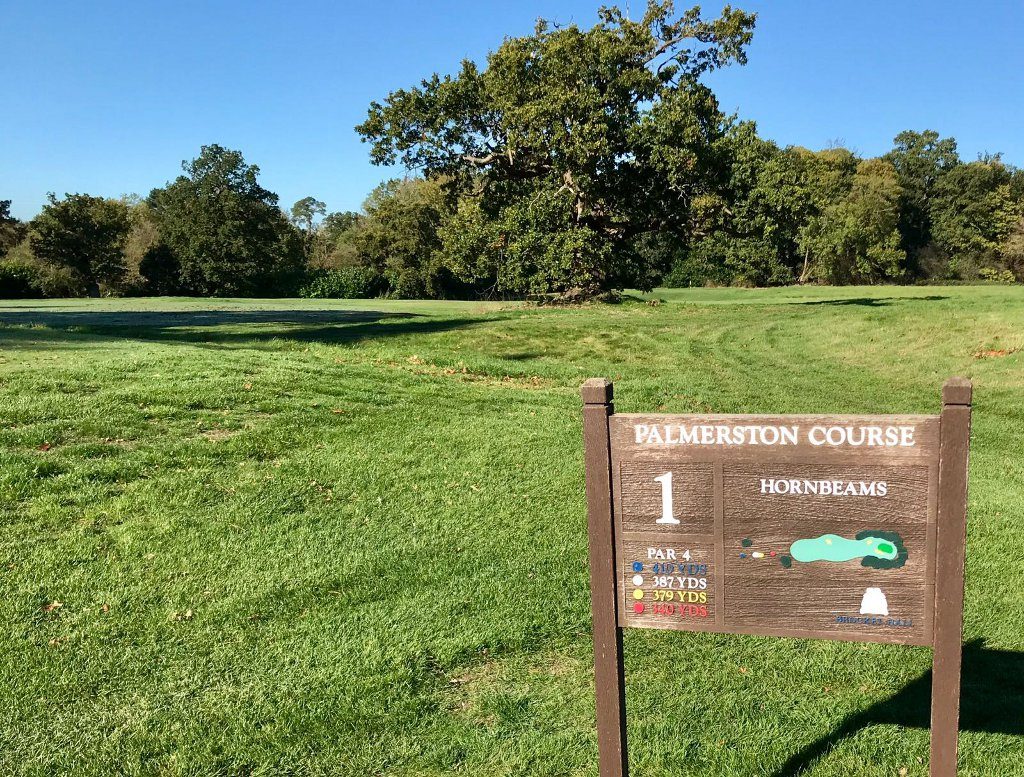 The second championship course is the Palmerston which opened in 2000. Yep, you’ve guessed it, both tracks are named after the two Prime Ministers who lived here. I didn’t play the Palmerston but the reviews are glowing. It’s a par 72 designed by renowned architect Donald Steel. I walked a couple of holes and it has a very different look to the Melbourne as it weaves its way through mature woodland. Straight hitting is more imperative here if you want to avoid the avenues of trees that flank the fairways. Think Woburn, home of the 2015 British Masters. Having two courses has its obvious advantages. If there’s a competition on one, members can simply tee it up on the other to avoid the congestion. 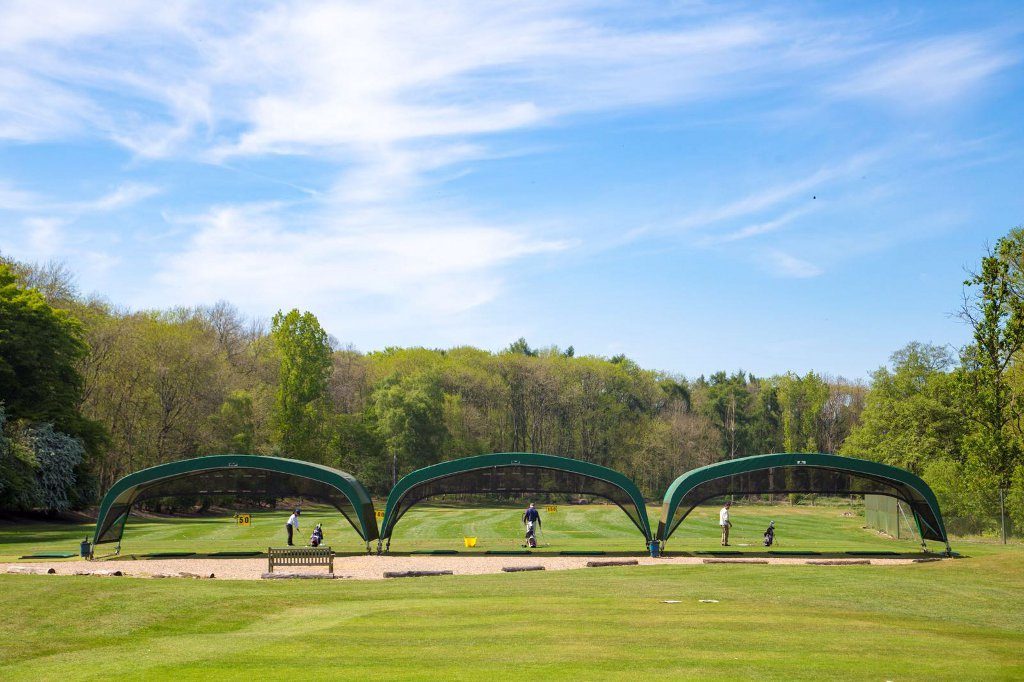 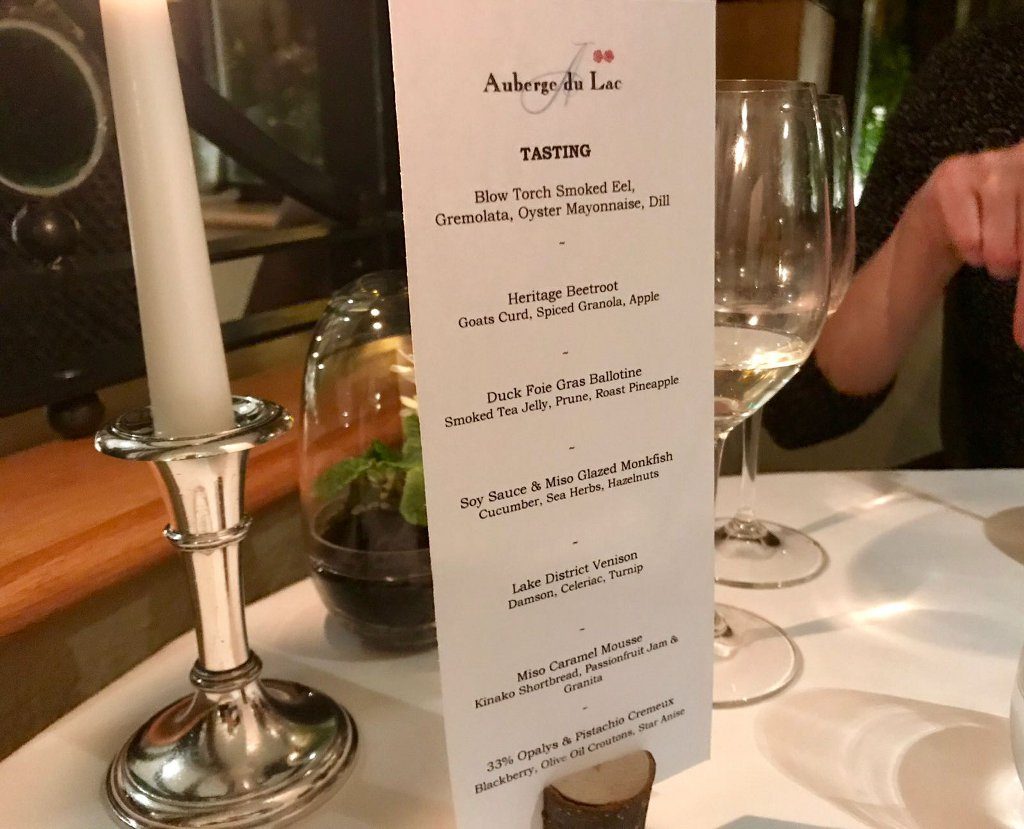 On the Estate overlooking the stately home is a hunting lodge called Auberge Du Lac which houses a superb restaurant. Jean Christophe Novelli was once Chef Patron and the food remains outstanding. I’m here with my good lady to try the eight-course taster menu. Some hit the palate perfectly, others are more challenging but it’s all beautifully presented and the tastes are vivid and varied. If you’ve watched The Trip with Steve Coogan and Rob Brydon, you get an idea of how it all works and, just as they do, we even get our own French sommelier to talk us through each wine accompaniment. Exceptional cuisine and an exceptional experience. 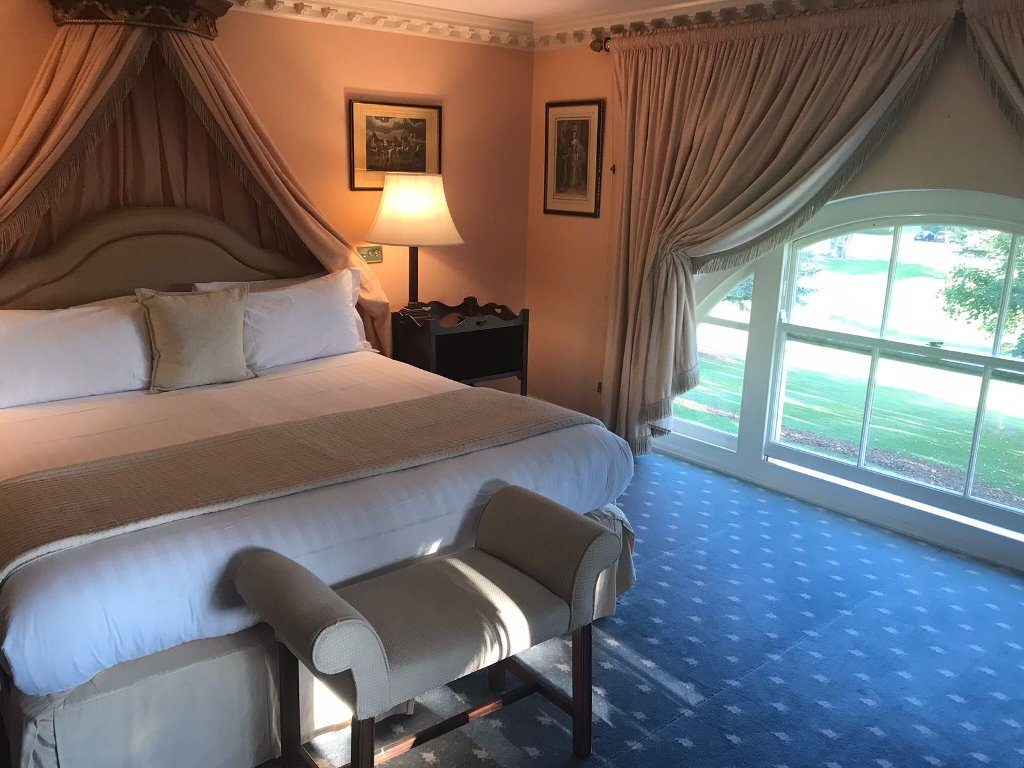 It’s a pleasant night made for a stroll but the wine has kicked in a little so it’s a lovely touch that after stumbling out of/gracefully departing the restaurant, we’re given a free buggy ride back to our accommodation for the night. The Melbourne Lodge is the original coach house and stable block where the valuable thoroughbreds resided before showing their might on the private race course that circled the Estate during the 18th Century. Each room is named after a famous racehorse (we get 1990 Derby winner Quest for Fame). The rooms are beautifully presented and I can’t speak too highly about the deep bath. I had to be prized out of it. Well, it had been long day on the golf course. 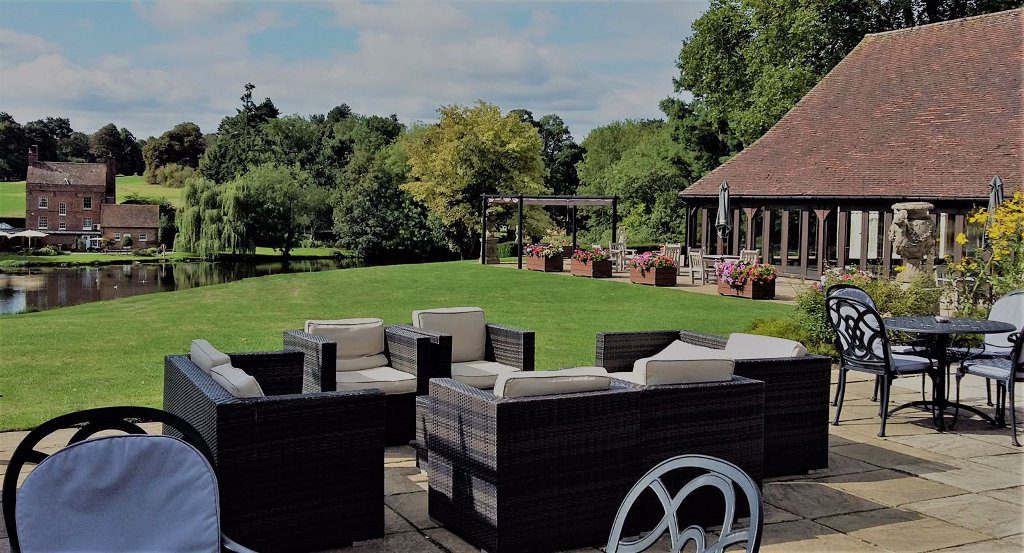 Overlooking the 18th on the Melbourne, it’s the ideal “19th hole”. We had post-round food and drinks upstairs although there’s plenty of room outside to take in the sunshine and fresh air.

The ultimate way of feeling the full experience at Brocket Hall is to become a member.

“The membership experience will differentiate itself from most other clubs in that it will include access to outdoor pursuits, art exhibitions, culinary, fine wine, and musical events in both the clubhouse and stately home itself, while visiting golfers who want to take on the distinct challenges posed by the parkland Melbourne and woodland Palmerston courses, can take advantage of accommodation in Melbourne Lodge on the estate.”

But throw in the academy, par-3 course, practice facilities, restaurants, events programme etc and this really is something special.

The surroundings are spectacular and what a superb place to get away from it all. 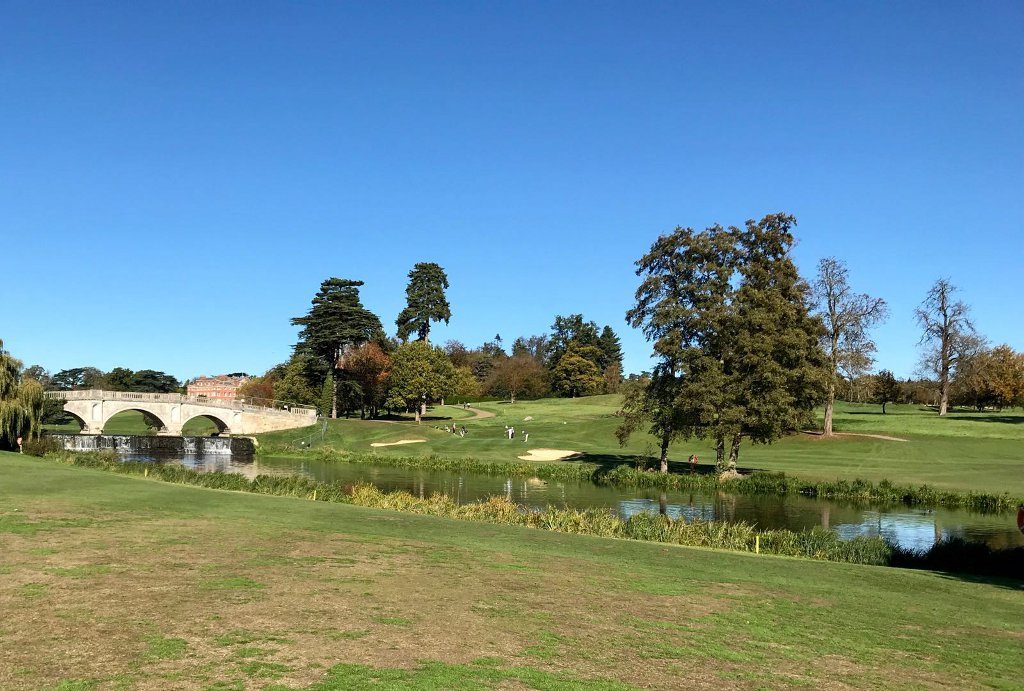 There’s usually a big ‘but’ at this stage.

Luxury comes at a price and membership at some prestigious courses around London and elsewhere can be exorbitant with joining fees over £100,000 before we even discuss annual membership.

It may surprise you then that Melbourne Club memberships at Brocket Ball start at just £2,325 with a joining fee of just less than double that.

The setting is wonderful and we particularly love the idea of getting two courses for the price of one, especially as they offer such a contrasting challenge.

Sometimes the promise of exclusivity and excellence brings with it a feeling of added pressure; of not wanting to put a foot out of place. It brings to mind Rory McIlroy’s line about playing Augusta National for the first time and being afraid to take a divot on the pristine hallowed turf.

But the staff at Brocket Hall manage to hit the perfect note. You feel special but not intimidated.

It’s the little touches that really count. From the friendly lady in the halfway house asking about your day and family to the buggy drive back from the restaurant, all the little extras add up to more than the sum of their parts to give Brocket Hall an all-around excellence at a price that stacks up impressively against other top-end venues.