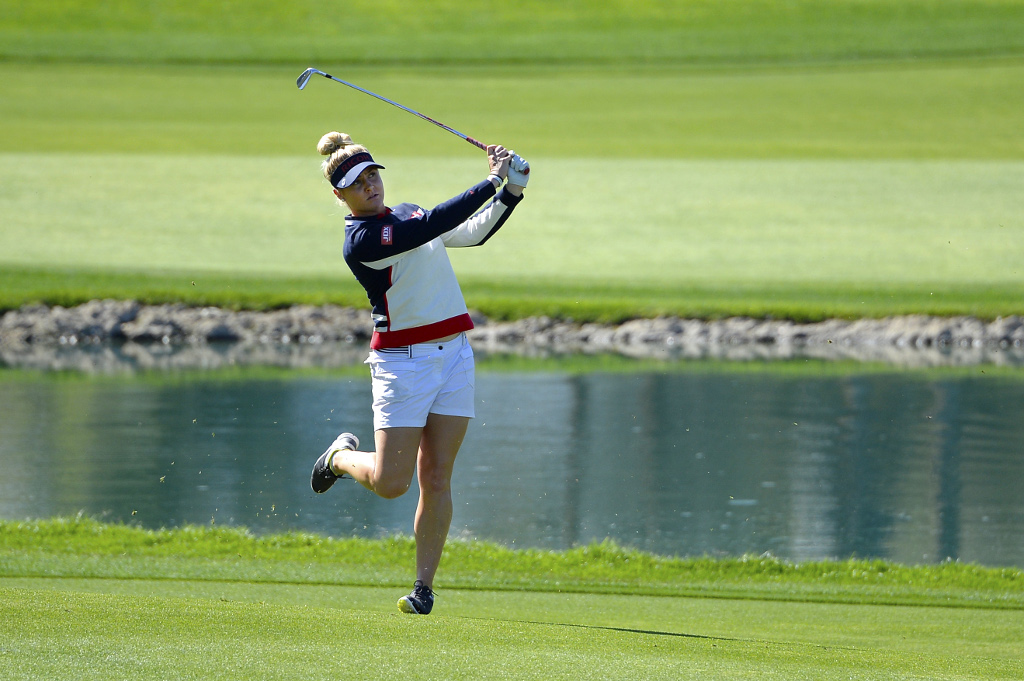 Matt Cooper is at Royal Lytham & St Annes which hosts the fourth major of the season for the women’s game.

This week marks a sgnificant birthday for the Ricoh Women’s British Open: the tournament celebrates 18 years as a major championship. Old enough to buy a drink, so for the second half of this preview, we’ll pour one with which to look back at the tournament highlights since 2001.

But first, a look at this week’s field:

Ariya Jutanugarn (Thailand, 9/1) – Returned to the top of the world rankings with victory last week in the ASI Ladies Scottish Open, a win which also proved she could win on the links (she’d always insisted she didn’t like the British seaside too much). It was a third success of the season and she appears a lot more settled than the first time she hit top spot, almost as if she’s got the shock of it out of her system. Purposefully smiles before every shot, a strategy which helped her win this event two years ago (but note it was at Woburn, not by the sea). Uses a 3-wood instead of driver.

2016 @RICOHWomensBrit champ and last week's winner Ariya @Jutanugarn says she needs to be patient this week at Royal Lytham & St. Annes Golf Club. "It's tough!" Jutanugarn played the course for the first time this morning.

Jin Young Ko (Korea, 14/1) – Three years ago she rocked up to Turnberry having never played links golf before, hired a local lad, told him to just tell her where to hit it, showed utter faith in him, and halfway through the final round she was leading. Eventually Inbee Park pulled her back but it was inspirational stuff. She dismantled the notion that links golf requires years of experience with a shy smile and a puffa jacket. A rookie on the LPGA this year, she’s won in Australia and was tied third last week in Scotland. Hits a straight ball from the tee, ideal for avoiding Lytham’s 167 bunkers.

So Yeon Ryu (Korea, 16/1) – Six years ago she made her championship debut at Royal Liverpool and coaxed her way to fifth after which her then coach Ian Triggs predicted she would one day become number one in the world. Last summer he was proved correct. Alas, like Jutanugarn, she was a little fazed by the experience. It’s about all that has confounded her however. Triggs also noted that she has exceptional emotional balance and had purposefully practised in the worst of the Monday to Wednesday weather, knowing filthy conditions were on the way. Sweet smile, inner drive.

Inbee Park (Korea, 20/1) – Another former world number one, a seven-time major winner and champion in this event at Turnberry in 2015. A winner earlier this season, too, and T9th in the US Women’s Open. Not competed much recently which is said to be a choice (because she can). Is that a sign of waning hunger or that she can catch the everyone napping? A sensational putter.

Sung Hyun Park (Korea, 28/1) – Makes up the trio, with Jutanugarn and Ryu, of short-lived world number ones during last season. Admitted on Tuesday that she found the growing expectations tough to deal with which is reflected in a season of highs and lows (after 2017’s consistency). Brandel Chamblee once mooted the idea that her swing is the best in the world. She, however, also confessed that she loves everything about Britain … apart from links golf.

In Kyung Kim (Korea, 33/1) – Defending champion who revealed on Tuesday: “This is my favourite course in the entire world. After I played here in 2009 I decided to turn pro. Defending here is a bonus. It makes me think a lot so I don’t get bored. I think that’s the secret factor. Severiano won twice here.” Has a life coach who works for NASA, loves the Beatles and has a sense of humour. When a loud explosion interrupted her press conference she gasped: “I heard that this morning too! I thought: Is it World War Three?! At least we have pot bunkers!”

Sei Young Kim (Korea, 33/1) – The wind is not currently forecast to be too demanding, but should that change she has to be a factor with victories in very blustery conditions in Hawaii, the Bahamas and on an island resort in China. Limited but solid links record.

Jessica Korda (USA, 40/1) – With the withdrawal of Lexi Thompson becomes the top ranked player from the USA and expressed a preference for flat links tracks such as this. That’s backed up by a best RWBO performance of T5 at Royal Birkdale. Comes from an under-achieving family (daughter of Czech Grand Slam winning tennis player Petr, sister Nelly is also in the field, brother Sebastian won this year’s Junior Australian Open).

Mo Martin (USA, 100/1) – Ranks 160th for Driving Distance and 1st for Driving Accuracy, a combo that served her well when winning this event at Royal Birkdale in 2014 (see below). Another ideally suited to the task of dodging those devilish pot bunkers. Has a bunch of devoted fans from north England who have followed her every year since the win.

Anna Nordqvist (Sweden, 45/1) – Finished in the top 12 in five of her last seven tournament starts and was also third on her last appearance in the States. Made the cut in Scotland without thriving, but the one-time British Amateur champion should be suited by the test from the tee this week.

Karrie Webb (Australia, 150/1) – Veteran wiles? Finished second on the course in 2009 and will be unafraid of fast-running conditions given her Melbourne sandbelt background. Also clocked a sneaky T11th last week in Scotland.

The amateurs – Linn Grant was T4th through 36 holes in the US Open and qualified on Monday with a 62, compatriot Frida Kinhult is sister of Marcus, who won the Lytham Trophy by eight shots. Leonie Harm was almost killed by a drink driver as a child; she won the British Amateur to qualify for this week.

Charley Hull – Three top 20s in her last four RWBO starts, but yet to make the top ten. Her best links round was a sparkling 66 on Saturday at Royal Birkdale in 2014, after which she revealed the secret was to imagine there were trees down every fairways.

Georgia Hall – Bang in contention throughout last year’s event at Kingsbarns and loved every second of it, eventually posting third. Improved form in the last two weeks. Was two shots off the 54-hole lead this time last year and hit the queue for fish and chips in St Andrews. Last year Gary Player gave her a tip on putting ahead of Kingsbarn, this time Lytham winner Tom Lehman urged her to play short of the fairways bunkers. She has a 3-iron in the bag for that very reason.

Bronte Law – Grew up playing links golf at Hillside (next door to Royal Birkdale), successful in the amateur game and also in college golf, now ranked 39th on the LPGA.

Mel Reid – Got herself into contention twice in the last two years at this tournament. Starred in the GolfSixes.

2001 – Sunningdale – Se Ri Pak, one of golf’s all-time inspirational figures (she prompted Korea’s love of golf and growing influence within in the sport), claimed the third of her five majors.

2002 – Turnberry – A second British Open title for Karrie Webb, but the first time it registered as a major, one of seven she has so far notched in arguably Australia’s greatest golfing personal record books (Peter Thomson always acknowledged she had won more than him).

2003 – Royal Lytham & St Annes – The only British Open victory among Swedish sensation Annika Sorenstam’s ten major wins. It came flush in the middle of a five year period when she won 50 times in 111 starts.

2004 – Sunningdale – One of the all-time great starts to a major championship round as Karen Stupples, leading by one, opened eagle-3, albatross-2 to find herself 5-under-par for the day through two holes. She eventually won by five, the first British winner of a British women’s major.

2005 & 2006 – Royal Birkdale & Royal Lytham St Annes – Jeong Jang and Sherri Steinhauer claimed the wins, but Sophie Gustafson finished second on both occasions. The Swede had won the event in 2000, the last time it wasn’t a major.

2007 – St Andrews – Glory for Lorena Ochoa as the championship graced The Old Course for the first time.

2008 & 2012 – Sunningdale & Royal Liverpool – Two wins for Jiyai Shin and both in very different circumstances. Heathland and sunshine for the first victory, linksland in high wind and rain in the second.

2009 – Royal Lytham & St Annes – Just 12 days after starting to hit shots again following the birth of her second daughter and 11 days after fleeing a burning hotel on her return to action Catriona Matthew pulled off an astonishing win.

2013 – St Andrews – A return to The Old Course and Inbee Park was on track for a Grand Slam after three major wins earlier in the year. Moreover she led the tournament two hours into the first day’s action. Alas she went backwards thereafter. Stacy Lewis, staying a mere pitching wedge from the 18th green, took the title.

2014 – Royal Birkdale – Unheralded and short-hitting American Mo Martin fell in love with links golf, her straight tee shots scuttling down every dry fairway and in the wind of the final day she set a target no-one could match. The full stop was dramatic: her second shot to the par-5 18th clattered into the pin and she tapped in for eagle.

2015 – Turnberry – Donald Trump said he wouldn’t overshadow the field, but he ramped up speculation about his arrival on Twitter, his helicopter buzzed the back nine on Thursday morning, he held a raucous press conference midway through the first round and in the second round his phone went off as a player prepared to hit on the first tee. Sad! On the course Inbee Park claimed her first British Open.

2016 – Woburn – The tournament moved to Charley Hull’s home club but unfortunately not her favourite course there. Instead Ariya Jutanugarn’s 3-wood bossed the field for her maiden major win.

2017 – Kingsbarns – Ariya’s sister Moriya played in the final group, attempting to complete a sibling defence of the crown, but In-Kyung Kim could not be stopped. The Beatles fan had missed a tiddler on the 72nd green to win the 2012 Nabisco Championship and lost in the subsequent play-off. It took a lot of getting over, but this time she did it.