Golf365 exclusive: The Round podcast – Lizette Salas on being a fighter and President Donald Trump 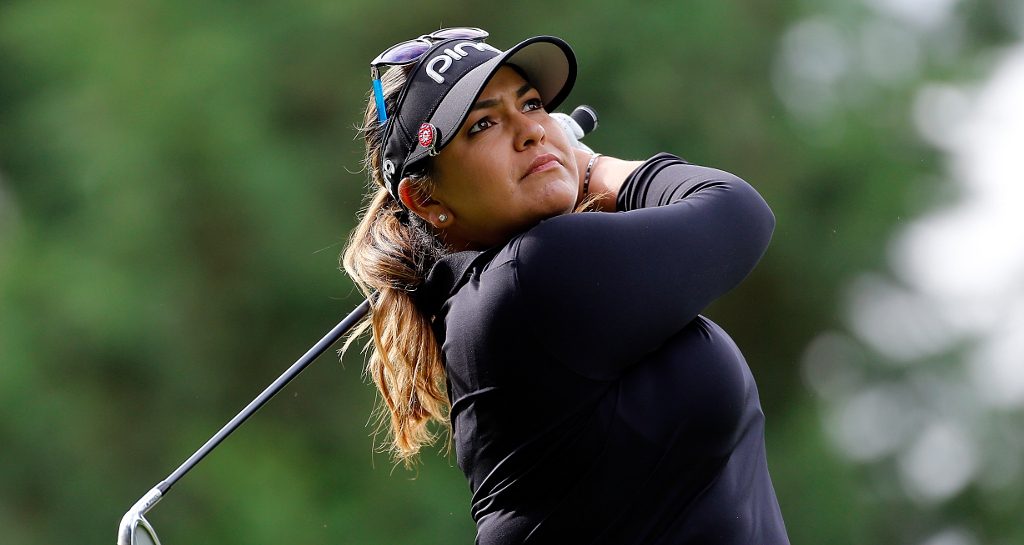 “There’s a fighter in me,” says Lizette Salas towards the end of the latest edition of commentator Richard Kaufman’s The Round podcast and the declaration is no mere bluster.

Nor did the point need emphasising because everything that went before in the episode, available exclusively to Golf365 readers via the link below, proved that this is a golfer who has absolutely earned her place at the top of the sport.

The 29-year-old’s story is the latest in this excellent series and it conforms to the trend Kaufman set in series one. We spend an hour in the company of a golfer, the conversation starts with one round that changed, typified, or shaped the player’s career – and then it branches out in wonderful style.

In 2018 we enjoyed particularly fine insight from S.S.P. Chawrasia, Matthew Southgate and Marc Cayeaux; this year Padraig Harrington has been predictably brilliant and Gary Player was outlandishly entertaining.

But the Salas tale adds to the catalogue in another sense entirely, detailing a story which starts with her Mexican immigrant parents, takes in her childhood in a tough part of town and ends in golfing glory.

The round she selects came at Q School, but the tale which spins off it is no less fraught with drama because Salas’ past informs her present in a way almost unique to anyone on the LPGA. Why so? Well, her rise in the game has coincided with the election of Donald Trump as President.

Inevitably she has found herself pestered for comments because he is not just the President, he has also been present at some of the most important weeks of her life as owner of major championship hosting courses.

“It’s annoying,” she says of this. “I’m kind of flattered people look to me to say something. (But) it’s not my place to ridicule someone in such high power. I’d like to stay out of politics.”

Sometimes, however, she has had no choice.

“I was bombarded by reporters at the 2015 Women’s British Open (hosted by Trump Turnberry). I saw it as an opportunity to show how much pride I have for the community I grew up in and the parents I have, for what I represent.

“We are proud of who we are. It doesn’t matter what person wants to attack the background I’m from, I’m still secure. That was my platform to say I’m a proud Mexican-American.”

In 2017 Trump National hosted the U.S. Women’s Open and the President watched the action from a sort of golfing Pope-mobile. Was she aware of him, asks Kaufman.

“Oh I was definitely aware,” she says. “He was not my priority that week, let’s just say that. A lot of people said I shouldn’t play there. But I am an American and that’s our national championship. I felt I could make a bigger impact by playing than not. I had a top 15 finish, pretty happy with that. But I will say that did not feel like a US Open, I will just say that.”

In 2017 she holed the putt to retain the Solheim Cup for Team USA – an emotional moment for anyone, but surely tinged with extra poignancy for Salas?

“All I was thinking about was ‘Hole it for my team-mates, for the Solheim Cup.’ Looking at that footage, though, it meant so much more.

“To have a daughter of Mexican immigrants hole the final putt to retain the Cup, my caddie also being Mexican? It was quite special. I didn’t take it in until after. Still gives me chills.

“I remember a reporter asking our President if he knew who I was and I got to thinking ‘Well, I’m pretty sure he has an idea now!’

“I would love him to meet my parents. I would love that. To tell him we are not a part of this stereotypical representation. I’m proud of my parents, what they represent and what this country represents to us. I’d need to keep my cool for that, right?!”

You guess that she’d wobble a little, but that she would still maintain control because, as The Round proves, Lizette Salas is a fighter. To hear her full story click here:

You can also catch up with previous episodes of The Round. In the first part of the new series Kaufman talked to new European Ryder Cup captain Padraig Harrington and it is everything you’d hope it to be: one hour of bright and intriguing chat about the game. Essential listening for those wanting to know more about the man charged with defending the trophy at Whistling Straits in 2020.

The second episode was a whirlwind 60 minutes with Gary Player. Less a chat than a non-stop, high-paced delivery of stories, opinions and assertions. The self-reverence is as undimmed as ever, but it’s an astonishingly entertaining show and includes tales you will not have heard before.