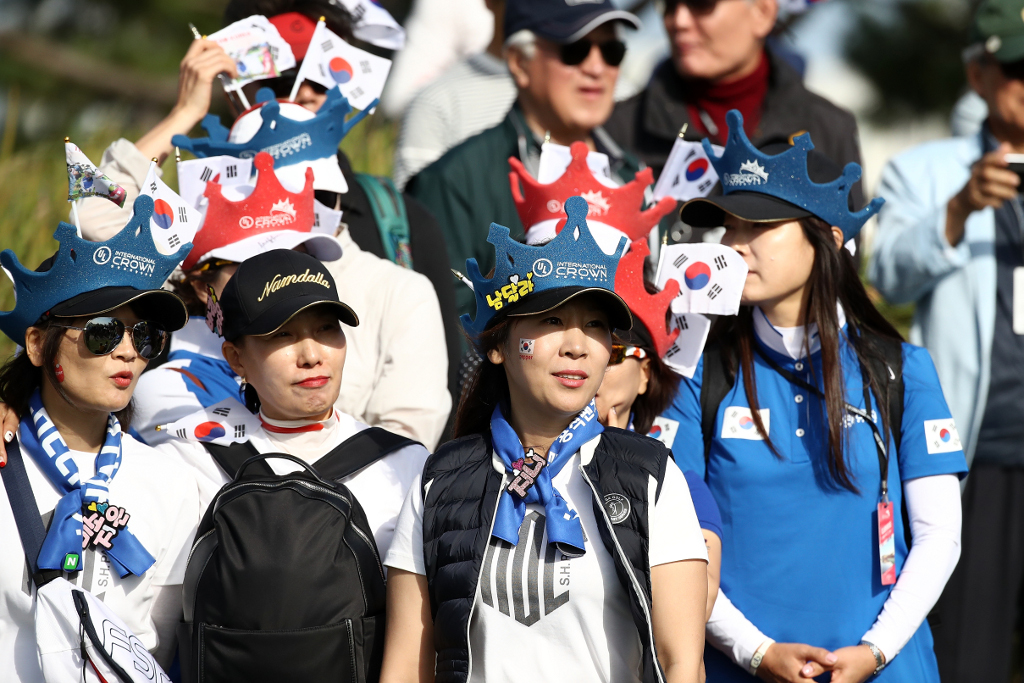 Golf365 columnist Matt Cooper travelled straight to Korea from the Ryder Cup to take in a couple of LPGA tournaments and learn a little more about the country.

On my flight over here I badly needed rest as we crossed the Gobi desert and I thought a familiar movie might send me to sleep. Alas, when Bond challenged Goldfinger to a round of golf I found myself alert rather than drowsy and moments later I was chuckling to myself at how apt the choice has been. “You must excuse Oddjob,” Goldfinger tells Bond. “He’s an admirable man servant, but not a very good caddie. Golf is not yet the national sport of Korea, eh?!”

One of the reasons for my visit was to find out more about the stature of golf in Korea (or at least get a slightly better grip on it). There has always seemed the slight whiff of nonsense about most of what we’ve settled for, not least because we do it with a lot of guesswork, most of it based on dodgy ground to start with. And whilst the sport has grown massively in popularity since the release of Goldfinger I’ve learned that it has not become the national sport.

Baseball is huge and it is as easy to watch it at night in bars as it is in the U.S. Plenty of people tell me that football, basketball and volleyball follow in the pecking order, with golf next. I half expected (and hoped) that the country was remarkably in thrall to the women’s game and yet that’s not entirely the case.

It’s clearly thought of more highly both as a pursuit and a spectator sport than in the UK, and the UL International Crown, the tournament I attended last week, was publicised and promoted in the host city of Incheon far more than the Ryder Cup was in Paris, yet plenty of people I encountered had little idea of either the presence of the event down the road (even though there were flags all the way down the middle of that road referring to it) or indeed the success of Korean women’s golf.

My Airbnb hosts, mum Hana and daughter Olivia, giggled with incomprehension when I told them of Korea’s strength. The barman in my favourite haunt was another for whom both the event and its significance had passed him by. In one sense this suggested that the picture is not entirely how I’d imagined.

A Walk in the Park

What can be said is that many who have taken the sport to their heart in this nation have come to love it in a distinctly Korean manner (which is to say very enthusiastically) and this is most obvious in the case of Sung Hyun Park. The 25-year-old is the darling of the crowds, who roared her name, carried her image, cried her name (literally in some cases), waved to her, giggled at any response, and sign up in their thousands for her fan clubs.

Getting the members of these clubs to talk about the details is, however, a little like venturing to the back streets of Naples and asking about the mafia. A lady I’ll call Ha Ji (she really did ask that I not use her real name) explained that there are hierarchies within the clubs, that many players have multiple clubs, that the players must approach them after rounds in order of seniority, that fans are attracted to players by personality and looks, and that some players have suffered because their fan club has behaved in an unruly fashion (less aggression than a transgression of polite behaviour).

Moreover this week was a real test because fans associate with one golfer rather than all Korean golfers. So to ask a Park fan to support anyone else would be like assuming a committed Liverpool fan would transfer his allegiance to Manchester United after Champions League elimination.

Curious as to why Park in particular grabs so much attention, and struggling to find the answer from anyone close to golf, I tried a different tack and approached my fellow Airbnb guest Rosie, a Spanish girl currently working in Korea for the U.N.

Feeling rather like Clive James, Alan Whicker or Michael Palin, I took her to a nearby bar then plied her with drinks and questions about the nature of the country, thinking the outsider-with-knowledge might provide clues. I mentioned that one notion about her popularity drew on her K-Pop-like looks.

A quick description of Park followed and Rosie then told me of a popular app which allows users to choose which K-Pop star they would most like to resemble. The second most popular selection (Jimin) is, well, a bit of a dead ringer for Park. Moreover, that led me to check out K-Pop calendars and other merchandise which further highlighted the fondness for the look.

I was later told that it is not only short hair, but pale skin and minimum facial expression which is deemed a good look (the latter is why Korean girls often hide their face when laughing or smiling).

They are crazy for Sung Hyun Park. Just nuts. She has over 200,000 members in her fan clubs. Yes, plural. They hang on every shot. pic.twitter.com/UkSa3lf1qa

The flipside of all of this is the inherent weakness of travelling and hoping to draw out truths. There is perhaps no exercise more prey to using anecdotal evidence to make sweeping (and confident) generalisations.

The day after learning of the plastic surgery app I was agog that such a thing should be in fashion, but is plastic surgery not popular elsewhere too?! It’s quite clearly all the rage in Hollywood where all sorts of people want to look like movie stars in their prime (not least many of the very same movie stars themselves).

And what of the notion that Korean culture is so steeped in the furious acquisition of world class skill? To read much of what is written you’d think every single child was practising recitals, studying for post-graduate degrees at ten and/or being frog-marched to the driving range by demanding parents.

Turns out lots of young people idle around, love sitting in cafes, and plenty enjoy drinking in bars at night. Far from being a nation of nothing but one dimensional high achievers, it looks a lot like other countries.

I saw only one player get irritated by the crowd’s attention last week. It was only momentary, and there’s little doubt that the fans get very close and are rather guileless at appreciating that players have to deal with TV, media and sponsors, but there was a little snap followed by a snarky comment.

For the most part the players hopefully understand that it would be slightly ironic to bemoan the lack of interest elsewhere and than become antsy when they finally get an audience who so transparently give a damn.

My favourite gallery members were three 15-year-olds who all dreamed of being tour pros and, given that the worst of them was playing off scratch, there might be a chance that one of them makes it. As in awe as they were of Park and her swing, it struck me as telling that they found the fan clubs a little silly. For them the aim was their own success, not adulation of someone else.

Elsewhere I shall always remember the fan who burst into tears when Park waved at her and the extraordinary character wearing an inflatable Michelle Wie costume (what did he or she breath in there?! Was it healthy?!).

I will also never forget the sheer joy of the family of four who waited for high fives from So Yeon Ryu and Lexi Thompson ahead of the 14th tee. Mum and son got what they wanted from Ryu, Thompson delivered for Dad and daughter. They then all turned to one another, palms held out for inspection, gasping for breath and then celebrated with a giddy group hug.

Forgot to post this yesterday. It's just someone dressed in an inflatable Michelle Wie suit. Nothing out of the ordinary. pic.twitter.com/qcimzhgnaH

The tournament is in its third year and it had something of a tough gig, being so close this year to the PGA’s Tour Championship and Ryder Cup. But it has found a place on the schedule and whilst lacking the absolute edge of the Solheim Cup, it definitely provides a contest more worthy and competitive than the Presidents Cup.

Other nations (beyond Europe and the U.S.) deserve to taste the thrill of team golf and, what’s more, the LPGA needed, a few years ago, to address the growing cosmopolitanism of the circuit, something many on and around the Tour were having difficulty with.

At this year’s Aberdeen Standard Investment Scottish Open Mike Whan addressed the ASI Gender Summit and told them: “I used to sit in press conference and get asked: ‘What are you going to to with all the international influence on the tour?!’ I said two words: ‘Embrace it!’ They’d all start scribbling like I’d said something diabolical.”

The UL International Crown has been a fundamental part of his embrace and when Whan handed over the trophy to the Korean team he actually used the words: “It’s come home.” As words of worldwide unity (and an embrace of Korea) they had a power and intent that rather echoed Thomas Bjorn’s pointed homily to European solidarity at the Ryder Cup opening ceremony.