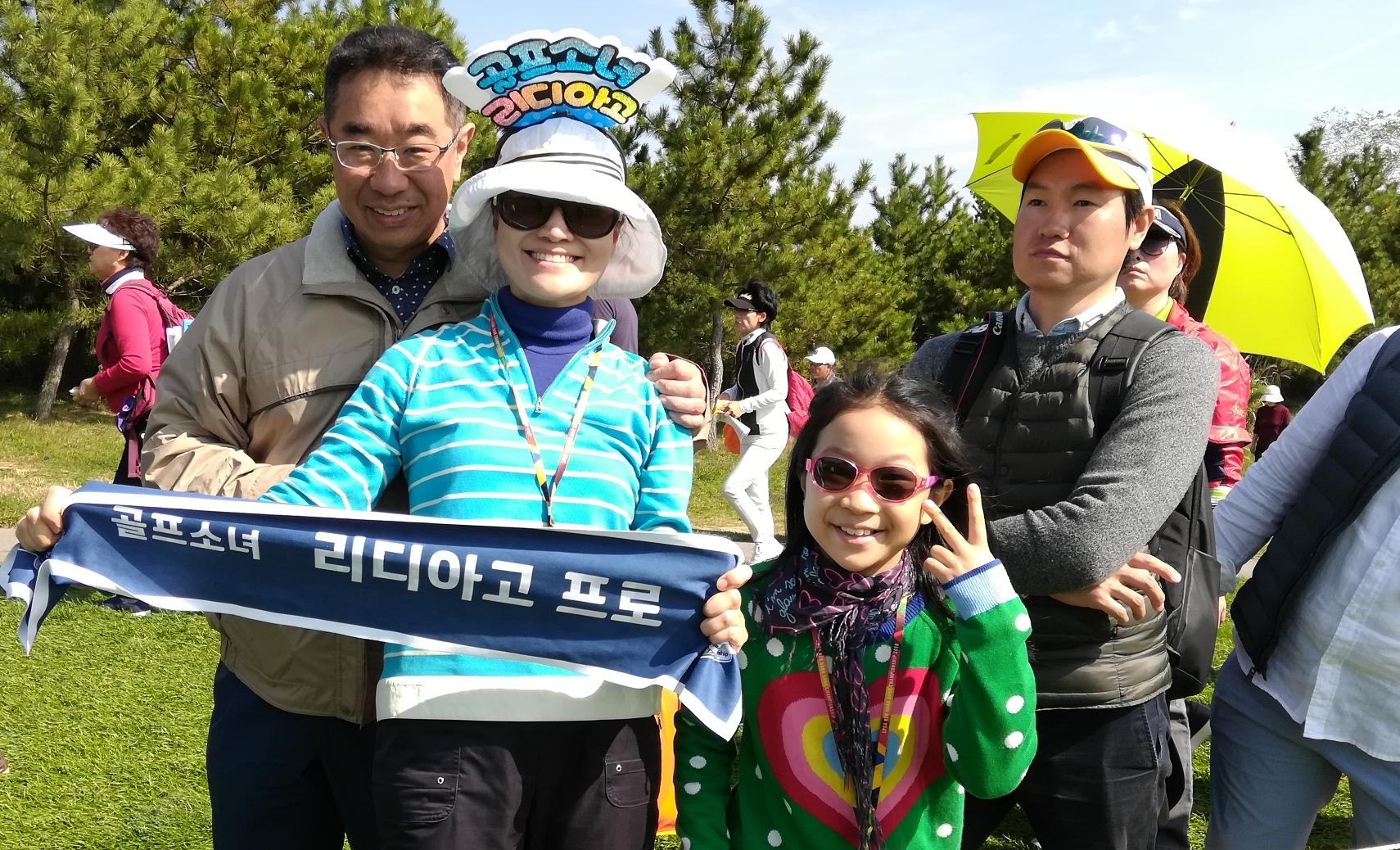 Golf 365 columnist Matt Cooper travelled straight to Korea from the Ryder Cup, to take in a couple of LPGA tournaments and learn a little more about the country. Here’s part two.

On Wednesday I took a tour which visited the De-Militarized Zone at the border between North and South Korea. A fascinating day is tinged, for obvious reasons, with sadness yet peering out towards the North from an observation point was one of the more remarkable travel experiences I’ve had.

There was also an element of comedy because I share my name with an Irish radio presenter who a few years ago made a film about Dennis Rodman’s trip to meet Kim Jong-Un. The film didn’t go down too well in the North, adding a frisson of personal excitement because I am frequently mistaken for the other Matt Cooper when I am in Ireland (most often when signing in for tee times). Wary of a rather less amusing case of mistaken identity I had the translator at the golf course write me a message of explanation. Fortunately it wasn’t required.

One slight letdown was that we didn’t get to see the “most dangerous hole in golf”, which is smack in the middle of the DMZ and surrounded by landmines. There was a discussion on the bus about Kim Jong Il’s famous 38-under-par round of 34 he claimed to have shot at the North’s only course in Pyongyang. So well-known has it become that it is one of the most popular google searches for one of the 21st centuries most infamous leaders. I also found myself watching the conscripts guard the border and then thinking of the many golfers currently on tour who might one day join those ranks.

For much of my second week I was based in the capital city and I did my best to engage the locals in chat about golf. As I suggested in part one of the diary, any travel experience is heavily reliant on anecdotal evidence and needs to always be viewed as such. But there is also value in talking to folk away from the golf course.

The key reason is that tour life is strange. Golfers, caddies, media and other hangers-on spend all their time either at the host golf club or in the same part of town for hotels, restaurants and bars. It becomes very easy to believe that a tournament has a bigger profile than in reality.

When making your way to a country such as Korea this bubble makes it even more tempting to believe the notion of golf being a national obsession. It’s a doubly persuasive trap because how else are we to explain the dominance of Korean women (and the rising strength of the men’s game)?

Yet, as I reported last week, the town which hosted the UL International Crown was far from agog about either the sport or the tournament, and Seoul was much the same. One night the manager at my local bar asked why I was in the city and he actually burst out laughing when I mentioned golf. “It’s for old people,” he said. “Rich people and old people.” Other new friends displayed confusion and even incomprehension when the subject was introduced.

Running counter to this is the truth that golfing apparel is purchased in huge quantities in the country (because of this PING has its only clothing-only store there) and screen golf bars are big business. But even the guy who served me at one of the latter said his client base is drawn from a very small demographic. Yet it is also true that plenty of players (including winner of the fortnight’s second tournament In Gee Chun) do not come from wealthy families.

A confusing message? Or is it just that the emerging picture was familiar rather than remarkable? Because you’d find barmen poo-pooing golf as a wealthy old man’s sport in Britain, Europe and the States. You’d find folk in any of the world’s great cities who neither know nor care much about the pastime. And you’d find success stories outside the dominant demographic in Australia, France, Argentina and elsewhere.

The more time I spent in Korea, the more I felt the sport’s role within wider society was much like it is anywhere.

In Gee Chun a popular winner with the home crowds who packed the fairways. pic.twitter.com/OAEa1pNglY

The barmaid at my favourite spot to end the evening was an interesting character – a Canadian-Thai who was in the country to try and break the K-Pop/Idol market. Her insight into a hungry world of hopefuls reminded me of Q School. Lots of wannabes, pushing themselves through endless training regimes, always preparing for auditions in front of recording company executives. The difference was they were tested once a month rather than once a year.

It led me to investigate another possible reason for the success of Korean golf, one which links the sport with K-Pop, K-Drama and commerce. In the same bar I met Ben, a Korean academic, and we discussed the brutal history of Korea throughout much of the 20th century which I had initially learned of at the War Memorial: oppression by Japan for much of the first half; destruction of property, land and lives during the civil war (1950-53); a period of military rule which ended in assassination and reprisals in the early 1980s.

And yet, from being close to the poorest nation on earth after the war in the 50s, Korea is now ranked within the world’s top 15 economies. It is a remarkable rise, one which has seen the nation’s music and drama become incredibly popular in China and Japan, two nations which were responsible for much of the anguish up to the 1960s.

I suggested to Ben that this economic lift and flourishing of culture was (at least superficially) reminiscent of Britain’s late-flowering recovery from the Second World War, when London and elsewhere thrived during the Swinging Sixties. Might women’s golf be like England’s World Cup success of 1966? Not an exact equivalent, maybe, but along similar lines?

“That makes a bit of sense,” he said. “There’s a real feel-good factor. A response to the troubles of the past and a freedom that present generations enjoy off the back of the toil of the previous generation who got Korea back on its feet.” It might not be the answer, but it could be part of it.

The love to go for a stroll in Korea and they often stop for some stretching exercises. So it was probably only a matter of time before they added sticks and little balls. pic.twitter.com/eMzm8L8KYt

Further to these thoughts I noted that it was quite common for some Twitter accounts to talk of the “huge” crowds at the fortnight’s second event. They were definitely big and some local observers believed they were as big as they’ve ever been. They were also big for women’s golf. So perhaps “huge” was being used as a relative concept.

But again it becomes a sort of self-perpetuating notions; by saying huge it adds to the bandwagon. I don’t want to be a party-pooper, but I didn’t think they were huge. I thought they were big. More importantly they were remarkable in their intensity and I rather like their slightly guileless shouts of support (I’m not a fan of grumbling if golf fans from nations new to the sport don’t always conform to accepted manners and mores).

This, it seems to me, is the rub: Korean fans, much like their players, adhere to the Korean fondness for being completely committed. That is their strength. If the country entirely fell for this game I suspect there would not be 39 Koreans in the world’s top 100, but 99.

And here’s the danger with falling for the notion that Koreans have some weirdly natural advantages over the rest of the world. Firstly, how do you explain Koreans who have menial jobs? What went wrong for them? Secondly, and more importantly, it does the individuals a disservice.

In Gee Chun is a self-taught maths whizzkid, brought up my her grandmother whilst her parents worked, who turned pro to support the family after their convenience store burned down. Na Yeon Choi’s parents ran a petrol station. Inbee Park is actually from a very wealthy family so her drive to reach world number one is another distinct tale: what drove her when so many others would have drifted in the same position? Sun Ju Ahn has become a multi-millionaire in Japan having left Korea because she was told to get plastic surgery and go on a diet to get Korean sponsors. Sung Hyun Park is trying to cope with being world number one whilst having a fanbase that is close to delirious – in fact it rather resembles, to round a circle, the Beatlemania of the Swinging Sixties.

What might be interesting is what happens next. In a BBC World Service documentary (‘South Korea: The Silent Cultural Superpower’) it was argued that K-Pop and K-Drama are changing, as are other genres within Korea’s music, film and television. It is growing up and is less conventional. What might this mean for K-Golf? More expression, more nuance, more knowledge of the individual, less regimentation, less conforming. Or, to extend the 1960s idea (possibly beyond stretching point): prog rock, glam rock, punk. And hopefully it will not just be the sport in Korea which changes, but our response and attitudes toward it.

Brilliant end to a wonderful fortnight. Become very fond of this country and, after her emotional press conference, very pleased In Gee Chun claimed the win and can smile again. pic.twitter.com/Efrc2xNjd2