Five things Justin Thomas did in 2017 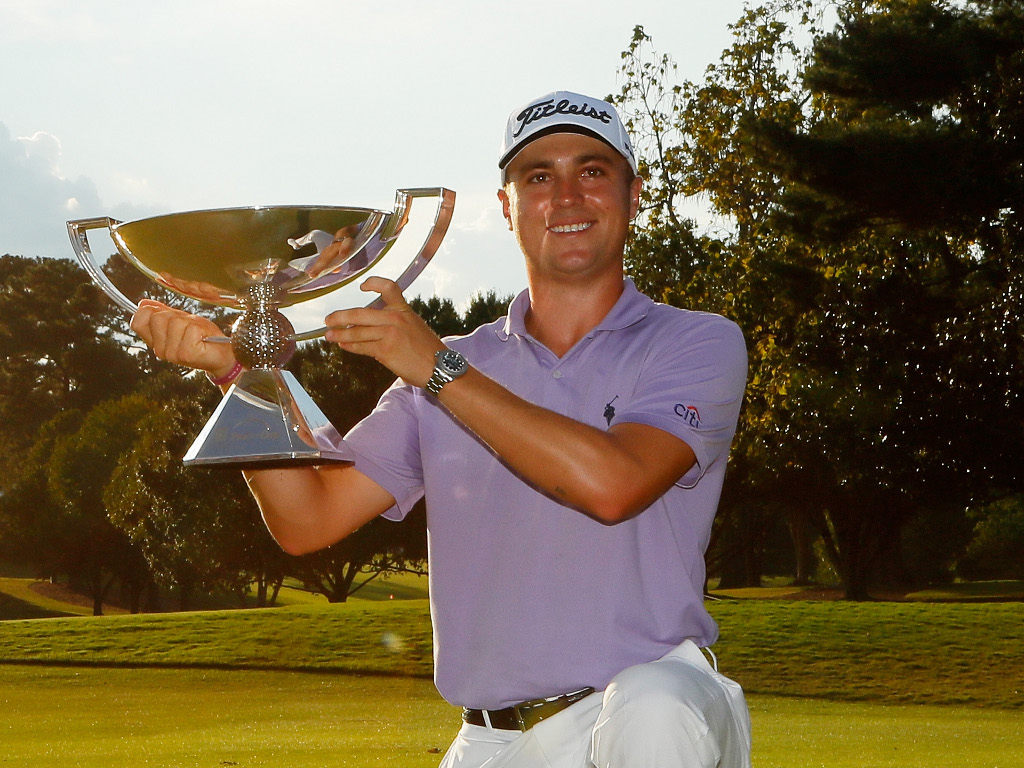 It’s been an incredible year for Justin Thomas as he really announced himself on the big stage – here is a summation of the season he’s had.

Thomas has changed his image from being Jordan Spieth’s best mate to being one of the best golfer’s on the planet.

Many felt that he was going to be another one of those sportsmen who have bucket loads of talent but who are unable to convert that ability into something tangible.

However, the last 12 months have changed all that. Here is what golf’s next best thing achieved.

Five wins, a major and the FedEx Cup

Thomas capped a five-win season that included a major victory at the PGA Championship by becoming the first golfer since Tiger Woods in 2009 to win the FedEx Cup without winning the Tour Championship (Phil Mickelson won it that year).

He will unquestionably be the 2016/2017 PGA Tour Player of the Year after his stellar season, and has now earned just under $20 million total this season after his FedEx Cup bump.

Thomas didn’t lose his game on the short flight from Maui to Oahu for the Sony Open way back in January.

In fact, he only got better.

Four days after winning the SBS Tournament of Champions, Thomas stayed hot in the first round at Waialae Golf Course.

He chipped in for eagle on his opening hole, turned in 29 and sank a 15-foot eagle putt on his final hole to become the seventh PGA Tour player to shoot 59.

At 23 years old, he became the youngest ever to break the sub-60 barrier.

Thomas will be one of six rookies on Steve Stricker’s Presidents Cup team next week at Liberty National in New Jersey, and he is predictably anxious to get the matches underway, so much so assistant captain Jim Furyk offered some friendly advice this week.

“He just preached to me it’s still golf.”

For all Thomas’ success, he deserves plenty of credit for putting himself out there.

The prodigy played in a staggering 21 official events this year. That’s two more than Jason Day did and five more than Rory McIlroy.

Golf is a glorified profession. It takes huge amounts of hard work to prepare for a tournament and for Thomas to have played in that many is testament to his dedication to greatness.

He isn’t done just yet though.

After next week’s Presidents Cup, Thomas said he plans to play the CIMB Classic in Malaysia, where he is the defending champion, and the new CJ Cup in South Korea in October.

After that he’s looking forward to a much-needed break.

At end of 2016, Thomas was ranked 21st after completing the Dunlop Phoenix Tournament.

In less than a year he has jumped 17 spots to fourth in the official world golf rankings – that takes some doing.

He wants to keep getting better though and he knows exactly who he needs to talk to in order to do so.

“I’m going to try to spend a lot of time with Tiger [Woods] and then definitely call and talk to Jordan [Spieth] because they’re the two people I’m closest to that have done something close to this and they’ve both achieved way more than this,” he said.